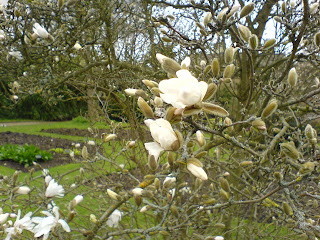 Not much time for blogging still, but at least I can do the round-up on my March reading. Because time was so short much of it was relatively undemanding. I was sorry not to finish Wharton's The House of Mirth in time to join in the comments at the Cornflower Book Group. At the end of Part 1 I wondered if I was beginning to find that the pace had perhaps dragged ever so slightly but, as Part 2 began, and along with it Lily Bart's real difficulties, my attention was recaptured and I finished it quickly. Was I convinced that Lily's end was inevitable? No, since right at the start I'd been urging her to forget her society mores and marry Mr Rosedale while the offer was still open. I grew impatient with Lily herself while still wanting to know her story.

Even if none of my month's reads took great effort, it remains satisfying and offered a good deal of pleasure, and I want to write about these books more fully than I can do here. Illyrian Spring was a lovely book by an author now largely ignored, I think, and it continued a theme begun by Vita Sackville West's All Passion Spent, that of the woman whose role as wife and mother has become, for whatever reason, less necessary and less fulfilling. A similar theme ran through Sylvia Townsend Warner's Lolly Willowes, and I want to look at a group of period novels which deal with the role of women; The Ladies of Lyndon by Margaret Kennedy was another such (and another author not much read these days?).

My interest in depictions of the changing experience of women piqued by so much of my recent reading (Marian Engel, the Canadian author, offered a viewpoint from the 1960s and '70s), I've begun, and am about to return to, Anne de Courcey's fascinating Debs at War. Whatever you think of the privileged existence of wealthy young women before World War II, they responded to events with a superb combination of humour and aplomb, and their reminiscences make entertaining reading. More of them later in the month, I think.

I missed the Green Knowe books by Lucy M. Boston when I was a child, but am now loving them, and |'d read only two of Madeleine L'Engle's wonderful series about the Murrys and the Austins. Catching up is proving a considerable pleasure, as has been my late acquaintance with Diana Wynne Jones. I can promise posts on both authors and, indeed, most of the others in the list. I've been thinking about Voyage by Adele Geras ever since I finished it, and look forward to sharing my thoughts.

Since I have spent this week in the company of academics, I thought I would finish with a favourite passage (one of many!) from Less Than Angels by Barbara Pym. The two students, Mark and Digby, have decided that it would be politic to invite Miss Clovis and Miss Lydgate to lunch, in case they may prove influential in decisions about future funding. Unfortunately the two ladies agree with too much alacrity, and when the party arrives at the restaurant, the young men have barely £1 between them. Pym's observation of social awkwardness is a source of great delight.

"This place is rather good," she said, stopping outside a reasonably modest-looking restaurant which had a menu up outside. Digby noticed with relief that some of the prices were modest too. He hoped Mark would have the sense to order Chipolata Sausage Toad (2/2) or Braised Tripe (2/-) and not to go off the deep end with Steak and Chips (5/6). He supposed Clovis and Lydgate would want that; they looked like the kind of women who would eat red meat, he thought resentfully. [...]
"Now," said Miss Clovis, a little too quickly for Digby, who had been going to say the same thing, "what are we all going to have?"
"I expect you'd like some soup of hors d'ouevres first, wouldn't you?" suggested Mark smoothly.
"Well, I don't know, really. What are you going to have?" She turned to Mark who had been studying the menu intently. He had done even better than Digby, and had discovered, right at the bottom, Macaroni Cheese (1/9). "I don't eat meat or fish," he said, "so my choices won't be very helpful."
Digby looked a little surprised.
"Are you a vegetarian?" asked Miss Lydgate in an interested tone. "I have great sympathy with those who are, though I am not one myself."
"No, not exactly," mumbled Mark. "I have eaten meat. I am not what you'd call abig eater, really."
"Oh, we are," said Miss Clovis cheerfully. "I think I should like steak and chips and perhaps another vegetable too, runner beans, I think."
"Yes, so will I," said Miss Lydgate. "What is the secret of making CHIPS?" Her normally loud voice seemed to have increased in volume so that it could be heard throughout the restaurant. "Potatoes are OVAL or ROUND. Chips are RECTANGULAR. I don't see at all how it is done."
"I think you cut the potatoes in thick slices and then into strips, " said Digby. "I have watched my mother do it."
"So that is it. I must remember that – first in thick slices and then in strips. Now what are you going to eat?"
"Oh, braised tripe for me," said Digby hurrying over the words distastefully.

Glorious! The photo at the top, by the way, is another from my visit to Oxford Botanic Gardens.