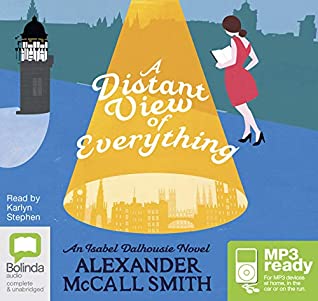 If you are just embarking on this series, there are spoilers here!
I really hadn't expected, when I read the first Isabel Dalhousie novel, The Sunday Philosophy Club, that I would one day be reading the 11th in the series. I thought a book about a polite Edinburgh lady with a predilection for philosophy would be just too niche. But here we are, some 16 years later (yes, I read the first almost immediately it was published, because I couldn't resist the title) - quite a lot has happened in Isabel's life, in a very quiet sort of way. She's acquired a husband and two children, something that looked rather unlikely in the first book. However, she still lives in the same house, with Grace her housekeeper, and she is still editing the Journal of Applied Ethics.
It was the Journal which really drew me to the series - I too was working, in Edinburgh, on a small academic journal in those days, and I recognised and identified with many of the issues Isabel faced as editor. In fact, they often made me laugh out loud. Indeed, my favourite moment from the series is still the never-posted reply to one of her contributors. I could have written that myself! Isabel's investigations - or "interventions" as she terms them - may have started with a sudden death, but the issues are more often of an ethical nature than an exciting one. McCall Smith says he doesn't think we celebrate kindness enough, and there is a great deal of it within his books. When Isabel finds herself lacking in kindness, she generally takes herself to task. But although she can be punctilious to the point of being maddening - to both reader and, sometimes, her friends - she is also human and sometimes just plain wrong.
Edinburgh life is entirely recognisable to anyone who's ever lived there, which is another of the series' charms (though not necessarily infallibly so - I am not a great fan of the author's Scotland Street series), though McCall Smith patronises a better class of eatery than I can afford.
The plot hinges on whether a personable man is preying on wealthy women. Isabel's friends are the sort of people who can afford to admire works by the Scottish Colourists with the familiarity of those who have inherited one along with their gracious Georgian residences. McCall Smith name-drops various real-life Edinburgh denizens from time to time, and Colourist paintings have featured in more than one of the books. I was glad not to have too much of Isabel's "sainted American mother" here, she's an offstage character who has never appealed to me.
I listened to the audio version of the book. There have been several readers throughout the series, but I like Karlyn Stephen, who reads here. She has a soft voice, which suits the subject matter, and a fairly generic accent - characters are distinguishable, which is important, and Isabel's lengthy musings (have they got longer?) remain lively enough to avoid longueur.
I wrote about Isabel Dalhousie once before, for anyone who is interested.
Posted by GeraniumCat at 17:01 1 comment: