It's been very clear, I think, from Rosy Thornton's last two books that, if she decided to tackle something a little darker, she would be more than capable. Ninepins confirms it - this is decidedly not a book to pick up when you've only got an hour to spare. You'll be turning the pages hours into the night, desperate to know what will happen next. It's about single mother Laura, who needs a new lodger when her expected postgraduate has a change of plans - with term already started there's no point in looking for another student, so Laura advertises with Housing Aid in Cambridge, and social worker Vince turns up with 17-year-old Willow, newly out of care. The old pumphouse in Laura's garden doesn't honestly seem ideal for a first attempt at independent living, and Laura has doubts, but Willow is adamant that she wants to live there, and Vince is perhaps a little more imaginative than many in his profession. So somehow Laura's doubts never quite get voiced, and it's only once Willow's actually moved in that Laura finds out why she was taken into care - for arson.

Thornton weaves three elements - fire, water and breath - through her compelling story. Water is ever-present in the Fens, and the action focuses tightly on Ninepins, the house beside slightly ominous the lode, as the seasons change. If we, as readers, would like to know more of what goes on in Willow's head, so too would Laura, who might be more successful in establishing rapport were she not so preoccupied with her daughter Beth's painful transition from childhood to adolescence. Beth's behaviour is well within the bounds of normality, especially following the move from primary to secondary school, but it's difficult for both of them as Beth explores the boundaries of parental control and the teenage girl's urge to grow up too quickly. Thornton is particularly incisive when dealing with that over-dependent bond between single mother and only child, and the hurt that both feel when its extent is tested. For twelve years they've been close, affectionate friends , sharing everything, but suddenly, Beth doesn't want her mother to be part of her birthday outing, nor to answer caring questions about where's she's been. Now she wants to go shopping in Cambridge with her frankly alarming new friends, and pink birthday cake isn't cool any more. That might sound a bit facile, but any mother knows how much these little rejections, usually delivered with an air of impatient hostility on the part of the child, can wound, and Thornton digs deep into the gulf that yawns when neither is sure how to repair things. Because however sensible people may be outside the home, when faced with an angry family member bedrock becomes an earthquake zone...before I take that metaphor too far, children, of course, don't yet have the resources, and it is generally up to adults to effect repairs. Laura is new to problems with her daughter, and is overly conciliatory which, as parents who've been at it longer know, is a bad idea with teenagers. Willow, of course, is uncharted territory.

If I've strayed into the geographical there, it's because its hard not to see the Fens in those terms, with its straight lines, its Hundred Foot Drain, its acres of sky. And its Siberian climate. But there's a strange beauty in that bleakness, and Thornton catches it perfectly. This is a book to savour, and to return to.
Posted by GeraniumCat at 18:23 8 comments:

Email ThisBlogThis!Share to TwitterShare to FacebookShare to Pinterest
Labels: Fens

The Secret Life of William Shakespeare by Jude Morgan

Jude Morgan, who has acquired many plaudits for his accounts of Byron, Caroline Lamb, the Brontës and others, has daringly turned his hand to Shakespeare, a man whose very existence has been doubted by many. This book tells the story of Shakespeare's adult life, while he was still working in Stratford for his glovemaker father, and beginning with his meeting with Anne Hathaway. Despite his father's disapproval he is drawn to the performances staged by travelling players, conscious that there is something missing in his life, a need which proves to be only temporarily assuaged by his love for Anne. What starts as a minor rebellion becomes an open one and he leaves for London with a troupe of players. Life as an actor, even a competent one, is hard in a city where the theatres are frequently closed by plague, so he turns his hand to improving scripts and, eventually, to his own plays, but his writing is driven as much by the creative urge as by the need for survival.

You really need a spark of genius to put words into William Shakespeare's mouth, he had such facility with words, coining a new one when there was nothing that would immediately answer. Jude Morgan is very, very good, but there was a tiny lack, for me, of that spark of brilliance, and a recognition that all the best lines in the book actually come from Shakespeare's plays, but this is subtly handled and there's never any hint of pastiche. And Morgan uses the neologising nicely, making it the subject of discussion between writers, producing this inspired example:


Look you, if we were to be villains, what manner of villains would we prefer to be? Weak vacillant ones, or tremendous ones, tip-full and exuberating?

Clever, that, I thought appreciatively as I read. There are some well-wrought Shakespearean conceits, too, as here:


Her parents were dead, and she lived with an uncle as guardian and the old deaf woman who had been her nurse in St Magnus hard by London Bridge. The uncle had been a tanner and had, reputedly, made a heap of money. So it seemed from the look of the house, when Ben at last made his formal call: bars and shutters everywhere proclaimed the miser's hoard. Within, he passed through so many locked doors, and little passages and vestibules – like infant rooms imprisoned and stunted - that he thought he might come out at the back door, never having been properly in the house at all.

That made me think of strongboxes, and Elizabethan architecture, and dark panelling. Indeed, the joy of this book was when the attention was turned to writing - to the creative drive, the pleasure of words, the turning of old stories into new. At such times all the playwrights, Will himself, Marlowe, Jonson, Kyd, Dekker, seemed most alive, close to our modern sensibilities but not anachronistically so – after all, the problems that face the writer are born anew with every individual. Something of that is true for actors, too - you can learn technique, but not talent. Will's also an actor, of course, and Morgan uses this adroitly to address the issue of Shakespeare's identity, drawing one of those characters who's difficult to know, someone who slips through the fingers of even the most perceptive acquaintance.

Morgan's feel for the time is very good. As far as language goes, he chooses to go for modern idiom, while again avoiding either words or images which would be too obviously out of period, and, as I've suggested, keeps his characters functioning within a convincingly Elizabethan worldview. He wields recurring leitmotivs effectively as well, which gives a satisfying overall coherence. Perhaps this book will never quite "harrow up thy soul, freeze thy young blood" but it's an excellent historical novel and offers some convincing insights into Shakespeare and his contemporaries. If Morgan set out, in the words of his protagonist, to "write me a man, who thinks and lies and bleeds, and you remember him when you lay the book down or leave the theatre, recall and judge and think around him like a man you've known long to drink with", then he has succeeded here.
Posted by GeraniumCat at 09:36 6 comments:

Email ThisBlogThis!Share to TwitterShare to FacebookShare to Pinterest
Labels: historical 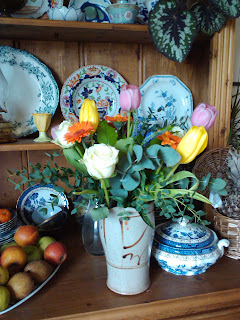 Lacking only an Easter egg...

It's five weeks since I last posted anything here, which wasn't my intention at all. But conferences, deadlines and year-ends simply took over, and no matter how much I wanted to be thinking about books, I could concentrate on little except comfort reading. Wolf Solent had to be abandoned, along with a question for the Classics Challenge which just seemed tailor-made when I saw it and to which I was dying to apply myself. Of course, it's month four of the challenge and I'm only on my second book, but I knew it might take me a while as it's slow reading.

My current reading links to my sojourn last week in Cambridge - I'm still dabbling my toes in the Fens, with Sybil Marshall's A Nest of Magpies, which is wonderfully absorbing, and then, to slow me down a little in my galloping consumption of both books, L.M. Boston's An Enemy at Green Knowe. We (second son and I) have now driven past the turn-off to Hemingford Grey, home of Lucy Boston, on six occasions, with no time for a detour, and I've had to content myself with looking at pictures on their website and Facebook (but to my delight, when I looked at the picture in this link, I immediately recognised the Chinese lantern from the book). And Sybil Marshall studied in the very pleasant surroundings of New Hall, Cambridge, not long after it was built, and where I've been admiring a particularly splendid Amelanchier lamarckii, a much better specimen than the one I came home to - although the blackbirds and sparrows seem to find the flowers on mine sufficiently delectable to be busily stripping it of them. I like reading related books, and would really rather not finish either, although I have a considerable pile of things waiting for me, including several new acquisitions, including Jude Morgan's The Secret Life of William Shakespeare, which I must read and review this week. Time will also have to be made to do lots of blog visiting, because I've really missed people.

Must go, got a simnel cake to rescue from the oven! I know it's rather late, but elder son isn't coming home until next weekend, when we're going to see the tremendous Spiers and Boden.