I have started an occasional series of posts about illustrated books here. As usual, it's purely idiosyncratic and based solely on what I like myself. As a child I was always surrounded by illustration, and we had copies of various classics - for instance, the "proper" versions such as Alice illustrated by Tenniel: anything else was heresy, although I rebelled later and bought other editions as well. But they are a big part of my heritage, and we still give each other picture books as presents (and my brother has recently brought out a wonderfully illustrated fish book, as much for the pleasure of sharing his delight in them as for anything else, I think, though it still has a powerful conservation message - I should add that the words are his, and the photos by someone else).

Pictures in books have always been immensely important to me and I'm always delighted when I come across an "adult" book which is decorated, even if it's only with pretty swatches or, even better, with little vignettes at the beginning of each chapter. It's one reason why, however convenient it is, and however much easier on the hands, the Kindle will never replace real books for me. Another is cover art, which I also regard as important, even if you can't judge a book by it! We may have the odd post which focuses on covers... 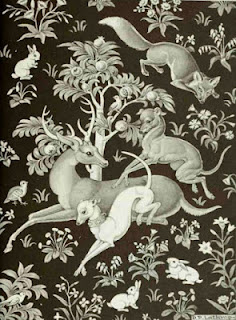 To date in the series I've talked a little about the fashion during the 20th century for woodcuts and lithographs in books, something I'm bound to go back to again, because it was such an important trend. And especially when, as in this Lathrop illustration, it echoes another artform - tapestry - so evocatively. Children's illustration is a major interest, particularly in books for older children - that's in part because there is just so much fantastic art in picture books for little children that it's impossible to keep up (there's a lot of absolute rubbish as well,  but we won't go there...). As for the classics, well, if I could afford Folio Society books I'd probably have a complete library of them for their artwork alone, but I can't, so my look at them will be very selective.  But I'm really glad they are there, and producing illustrated books for people who can afford them. As well as reproducing classic editions, they commission new artwork as well. 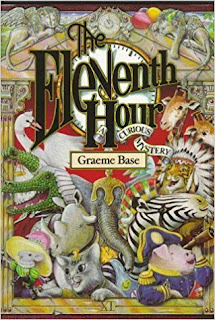 Then there are the picture books which are both for small children and for everyone else - the subject of my second post falls into this category. They are works of art in themselves, so beautiful that you go back to them for the sheer delight of handling them, looking at the detail in the pictures, savouring the (usually short) text. I find some of these quite irresistible.

I'm putting a link at the top of the page to this series, and also have a Pinterest board which includes more artwork from the illustrators I've talked about. The board's a bit disorganised at the moment because it's been going for a while, and started before I decided to write about them here, but I'll tidy it up at some stage. And that's it - on with the series, and I hope people enjoy it.

Jabberwocky by Lewis Carroll and Graeme Base

The second in my series of posts about illustrators. 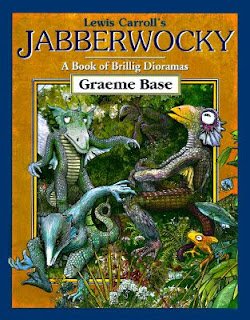 I bought this version of Jabberwocky specifically for the illustrations, having discovered it during a Pinterest trawl. Graeme Base is an Australian artist, and brings an exoticism to the poem which works well with the verbal inventiveness of the text. Strange beasts and birds frolic through the pages (gyring and gimbling in the wabe?), while the beamish young knight sets forth on his charger, eventually to encounter the Jabberwock. 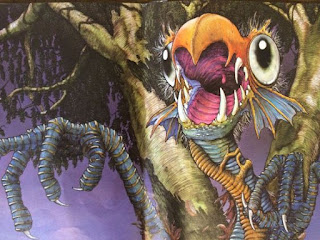 What more can I say? If you love this poem as much as I do, then I think you'll enjoy the colour and vivacity of the artwork, and if you've already got multiple versions, I'm sure you won't mind adding another. If you don't know the poem - well then, you ought to. Go and find it.

If you've got young children in the family, you might look out for the pop-up version.

Base has illustrated quite a number of exquisite books for children, including a superb alphabet, Animalia, which would enhance any child's learning. It's hard to choose a letter to illustrate just how wonderful it is, but there was a nicely bookish one which seems appropriate for a book blogger: 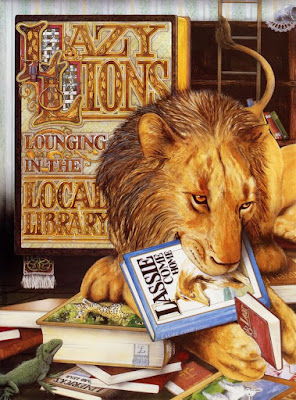 It's no surprise that Base loves illustrating dragons, too, and has produced a book - The Discovery of Dragons - solely on the subject (answering, I feel, a real and much overdue need for a identification guide to these fascinating creatures - and yes, I know Lady Trent has tried to rectify this omission, but her Natural History is a weighty tome for the field, and has a regrettable tendency to stray into memoir). 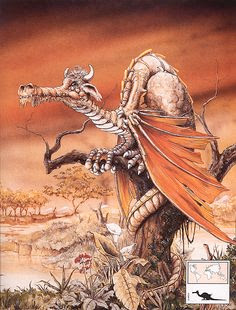 Base takes a lot of pleasure in words, too - some of his books are in verse - and I'm rather hoping someone might buy me The Sign of the Seahorse for Christmas, as it looks enchanting. So, too, does The Legend of the Golden Snail. Not all his books are available new, but secondhand copies can be readily found online. 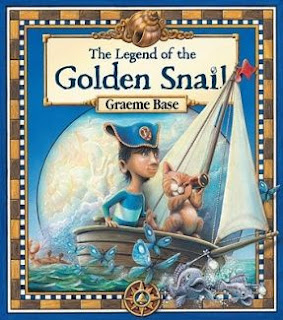 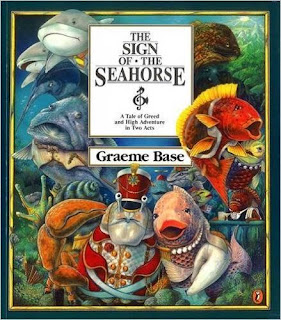 Finally, if anyone wants a preview of some of the illustrators who might come up in this series of posts, a look at my Pinterest board may be informative (at the very least you'll learn that I like pictures of animals!)
Posted by GeraniumCat at 16:24 2 comments: