I went with a friend to see Isabelle Coixet's The Bookshop on Tuesday. Two people have asked me what I thought of it. So I'm hauling myself out of exile to report. 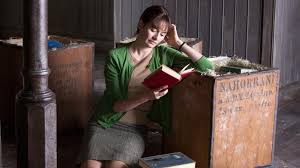 Looks idyllic, doesn't it? So easy to identify with a lead character who wants to open a bookshop. Don't we all?

It's a very quiet, low-key film which leaves a lingering sense of sadness. It's based on a novel of the same name by Penelope Fitzgerald, which I read a couple of years ago, and it leaves quite a bit out, choosing to place greater focus on an ultimately doomed love affair. You know it must be doomed by the agonising silences.

Florence Green, widowed for 16 years, arrives in a Suffolk village having found a derelict house that she thinks she can turn into a shop (what's she been doing up until then? we never learn, though we are told that she and her husband met in a bookshop). She moves into the house, which has been empty for some time. But there's a problem: the local lady of the manor, Mrs Gamart, wants the house too, to turn it into an art centre; after all, she says, there are other empty properties in the village equally suitable. Florence doesn't hesitate - she marches off to her solicitor and tells him to hurry up and finalise details. If I sound a bit unsympathetic, I'm not really: Mrs Gamart is horrible, I'd have reacted the same way. But looking back, I do find myself wondering why Florence is quite so recalcitrant. If she'd for a moment considered compromise, the subsequent events may not have occurred. But she forges on, with help from the local sea-scouts, and a precocious child called Christine who helps out for 12/6d a week, and with whom she forms a touching relationship. Even though Christine doesn't like to read they find a rapport through their shared work. Her only other real ally is Edmund Brundish (Bill Nighy), a recluse who buys books from her. 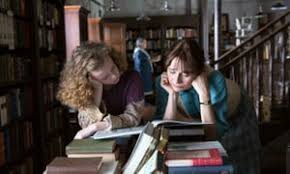 So far, so good. There's a lot to admire - the substitution of Co. Down for the Suffolk village works well and offers opportunity for lots of windswept shots of Emily Mortimer sitting on the beach. There are some excellent performances, and Mortimer and Nighy manage a kind of chemistry-despite-themselves which is very tenderly observed. As I've said, there is much from the book which is left out, and from a directorial point of view that's a good thing (it's why short stories make the best adaptations). Sadly though, much of that detail is what makes it such a fine and subtle book, and its loss makes it just a "nice" film.

Driving home after the film we shared our quibbles: immaculate period cars (it's set in 1959) - not a speck of rust in sight. William Morris wallpaper - how could Florence possibly afford it? Despite the film's opening, in which Florence is acquiring a frock for Mrs Gamart's party and ends up looking completely different from everyone else -- 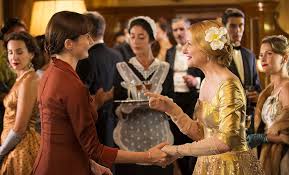 all the costumes look as new as the cars. No-one has frayed cuffs, the handmade knitwear is all straight off the needles and Florence's wardrobe is both extensive and stylish. In fact, for a woman who's supposed to be middle-aged and insignificant-looking, Mortimer is altogether too charismatic. Actually, Co. Down is a bit lush for the Suffolk coast, though the late summer trees are made to look faintly oppressive, full of restless movement in the ever-present wind. And whatever happened to the ghost?

To sum up, then - The Bookshop is worth a trip to the cinema, but don't think that, having seen it, you needn't read the book. You'd be doing yourself, and Fitzgerald, a disservice. 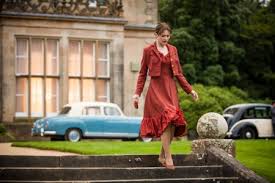