Thunder On The Right by Mary Stewart 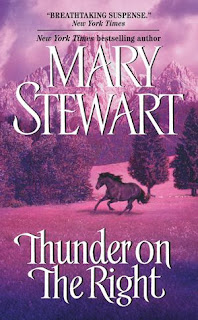 Not since my last reading of Black Narcissus have I encountered so many hooded eyes under conventual veils, slender white fingers convulsively clutching pectoral crosses and torrential rain. But I was in the mood for something short and gripping, so turning to Mary Stewart seemed natural enough, and I quickly found myself borne along on descriptive sentences that seemed never-ending along with a liberal dose of the aforementioned hysteria.

Actually, the book opens very pleasingly, with a sort of cameo from two Cambridge geologists, Miss Moon and Miss Shell-Pratt (for my fellow Thirkellites, they are a Hampton and Bent couple, though both stoutly brogued and tweeded) who are holidaying in the Pyrenees and rock-hunting, their dinner conversation all gabbros and anticlines, while Miss Jennifer Silver, twenty-two and coolly virginal, idly listens while dining in her hotel. She has come to meet her cousin Gillian at a convent in the Vallée des Orages  - and if that doesn't warn you what's coming... but we read Mary Stewart expecting a romantic mystery, with only the most veiled (see what I did there?) references to anything as untoward as sex, though violent death, of course, is fine.

First, however, she meets Stephen Masefield, the only man with whom she's ever been seriously involved - but he's a musician and her father approves, so we know he's going to be a protector, and not the treacherous lover we might otherwise encounter in an MS novel.

Now, despite my flippant tone and Stewartian sentences, I don't actually want to give the plot away - suffice to say that when she gets to the convent, where she will inevitably stay for a period so that the action can be cloistered and claustrophobic, events will move inexorably towards the helter-skelter denouement that we expect from this author. There's always a chase, and they are always, somehow, the part that gives me least pleasure, I suppose because they get very predictable. From about the halfway point, you know exactly how it is going to end. In my teens, I suppose, I found that cathartic, but in fact it's not what I remember about her books - rather, I recall the settings, always richly described, and to some extent, the heroines, although the latter do tend to blend into one - all early twenties, attractive, poised, well-spoken and capable, from "good" backgrounds and, usually, with plenty of spare time and money on their hands. More recently, my favourite Stewart, and the one I re-read from time to time, is Thornyhold - it was written 33 years after her first novel and, although it still has elements of the romantic mystery, is much quieter and more pleasing, and the heroine, although still young, seems more mature.

Several of her novels play with the paranormal, but Thunder On the Right, written in 1957, sticks to the Gothic. In one of her later novels, a character scoffs:


"A robed figure in a darkened church? Absurd. They had a word for the silly penny-dreadful, didn’t they? Gothic, that was it. Robed nuns and ancient houses and secret passages, the paraphernalia that Jane Austen had laughed at in Northanger Abbey."

But this one plays into them, right down to the tenebrous church. As with many of her books, both title and chapter headings are aptly chosen, in this case with reference to music (actually, I think she missed Tenebrae - how thoughtless! - but I liked the use of Bridge Passage). I think it was her titles which started me reading her books in the first place - although at the time I first read it I was still young enough to be horse-crazy, what drew me to Airs Above The Ground was the evocative title. Even at its most histrionic, her writing is intelligent and well-crafted, and when later I discovered her Merlin books, I was immediately hooked. And, having invoked it in my opening comments, I should say that  Thunder On The Right has very little of the tense eroticism of Black Narcissus (19397), though given the popularity of the film (1947), it may well have been at the back of Stewart's mind while she was writing.

Right now, Thornyhold beckons again, so I may have more to say on the subject of Mary Stewart shortly.
Posted by GeraniumCat at 16:32 3 comments: