Pollyanna is published on 28 February

One of the children’s classics I didn’t read when I was a child was Pollyanna. It had been described to me as a story about a pious little girl who was always finding reasons to be glad – it sounded absolutely sickening and I vowed to avoid it at all costs; after all, I was an Anne of Green Gables girl! I had it firmly fixed in my head, Anne was the fun one, Pollyanna was a prissy little miss. However, when the admirable Hesperus Press offered me a copy, I decided it was time to see if my preconceptions had been right – and, at the risk of sounding a bit Pollyanna-ish myself, I’m very glad I did!

Arriving in Beldingsville after the death of her missionary father, Pollyanna meets Aunt Polly, a sour spinster who has agreed to take on the little girl only because she knows her duty. Aunt Polly is a good woman, but a child in the house is unwelcome – consigned to a disappointingly bare attic, however, the first thing Pollyanna does is shin down the tree outside her window in order to explore her surroundings. And she continues in this irrepressible vein thereafter, talking nineteen-to-the-dozen and being so busily glad that she carries the people she meets along with her.

Does that sound unbearable? Truly, it’s not – because even though Pollyanna could talk the hind legs off a donkey, she can listen, too, and she tailors the reasons to be glad to the circumstances of the person she’s persuading to join her in the Being Glad Game. She tells her game to all and sundry – the only person she doesn’t tell is Aunt Polly, because that would mean explaining that her father had invented it, and Aunt Polly has forbidden talk of her father, who married Pollyanna’s mother against the wishes of her family. Pollyanna, who has opened her heart to Aunt Polly, despite the disapproval with which all her actions are met, sees this ruling as being intended to save her from painful reminders that she's now an orphan: “It’ll be easier, maybe – if I don’t talk about him. Probably, anyhow, that is why she told me not to talk about him.”

The charm, and what stops it being unbearably smug, is that Pollyanna has discovered for herself the Aristotelian “good life”, and her living of it is exemplary. Her resolute cheerfulness is full of bravery and goodheartedness, and she wins over townsfolk and reader equally. There’s nothing prissy or goody-goody about her – she’s exuberant, candid, full of imagination and compassion, and, above all, lovable. She knows it isn’t easy to see occasions for gladness in everything that life throws at people and, indeed, even her indomitable spirit wavers heartbreakingly when she faces her greatest adversity.

The writing is a surprise, too, in a book first published in 1913. Porter has a lovely direct style with none of the prosiness that characterises many children’s classics. The dialogue is lively, the other characters memorable, and the plot really zings along. I read it over two evenings, looking forward to it all the second day and quite determined that I wasn’t going to stop reading before the end. The Hesperus edition is lovely too, with an attractive cover and a real feel of quality – I did appreciate the binding that makes it easy to hold the book open comfortably. This is a book that really deserves its classic status, and equally deserves to find a whole new readership. Rejoice greatly, and welcome Pollyanna into your lives (and onto your bookshelves)!
Posted by GeraniumCat at 10:18 13 comments:

The Girl Who Circumnavigated Fairyland... by Catherynne M. Valente

The full title of this book is The Girl Who Circumnavigated Fairyland in a Ship of Her Own Making, and I have been meaning to read it since I first read about its publication. Now, thanks to Lovereading, I have finally got round to it. And I was enchanted. I knew within ten pages that I was entirely happy and going to love it.

You are swept away from the start very much as young the young heroine is. Young September, a 12-year-old living in Omaha, is fed up at home - her mother is never there (she's busy making airplanes for the war effort), her father has gone to be a soldier, and she's lonely. But the Green Wind takes pity on her and arrives on the Leopard of Little Breezes to take her to Fairyland, where she finds everything is not just lovely, because the wicked Marquess has imposed stringent laws which mean that no one is allowed to fly and witches can't work their witchcraft properly -- in short, what is needed is a girl who is willing to go on a Quest to put things right. And despite discomfort and difficulties and even enormous setbacks, September is prepared to take on the task. After all, she reasons, why else was she brought there?

I love the way in which the storyteller addresses the reader directly and says things like "you must remember from your own adventuring days how harsh a task lies before her"... I love the way everything isn't explained all at once, even though we have an all-knowing narrator. I love the names of the characters: September who was born in May, the Wyverary A-Through-L whose father, he thinks, must be a Library, the frightening Glashtyn...

I found myself thinking a lot about the literary influences behind this delightful book -- I detected, I think, a soupcon of The Wizard of Oz (not, I admit, my favourite book), a little smattering of Lud in the Mist (practically required reading for Fairyland aspirants), a suggestion of Thurber (a glorious teller of fairytales) and more than a hint of The Phantom Tollbooth, a book which should be an admission ticket to Faerie in its own right.

This is only the first of September's adventures in Fairyland and I'll be reading the next one very soon.
Posted by GeraniumCat at 10:46 12 comments:

Elizabethan England is probably associated in most people’s minds with dark deeds, notorious spymasters and religious strife – although things were better under Elizabeth than they had been under her sister Mary, being Catholic was still dangerous and recusants were expected to demonstrate their allegiance to the new church. Conspiracy was rife – England was surrounded by Catholic countries and, with her cousin Mary Queen of Scots* awaiting execution for plotting against Elizabeth, there was a very real danger of invasion. A plot to murder Sir Francis Drake would, if successful, throw the English fleet into disarray and open the way to England’s enemies. John Shakespeare (brother of the more famous Will) is chief intelligencer to Sir Francis Walsingham, the Queen’s spymaster, and it is his task to uncover the plot. It must be a Catholic conspiracy, but could it be linked to the murder of a young woman who is known to have Catholic sympathies? Thwarting Shakespeare’s efforts is the brutal torturer Richard Topcliffe, a man who enjoys his work and despises Shakespeare.

Although I thought the plot moved a little slowly at times, there are some gripping moments and loads of period atmosphere, which bodes well.  Historical crime is rather fashionable at the moment, and a well-written series is always welcome. There are already two sequels to Martyr, exploring the darker corners of the period, and it’s good to have an author’s website with some nice pictures of Elizabethan houses, a lexicon, and information about some of the real people who appear in the books.

The third in the series, Prince, has just been published and both it and I like the look of the plots for both it and the second book, Revenger. But I have to admit that I'd order them from the library rather than buy them.

My copy came courtesy of Lovereading.

* Apologies to anyone who read my original version in which I made a most egregious error!

The Outcast Dead by Elly Griffiths

I know a lot of people are going to greet a new Ruth Galloway novel with delight, and I'm delighted to be able to say that, in The Outcast Dead, Elly Griffiths has done it again. Resoundingly so. I stayed up half the night to finish it. 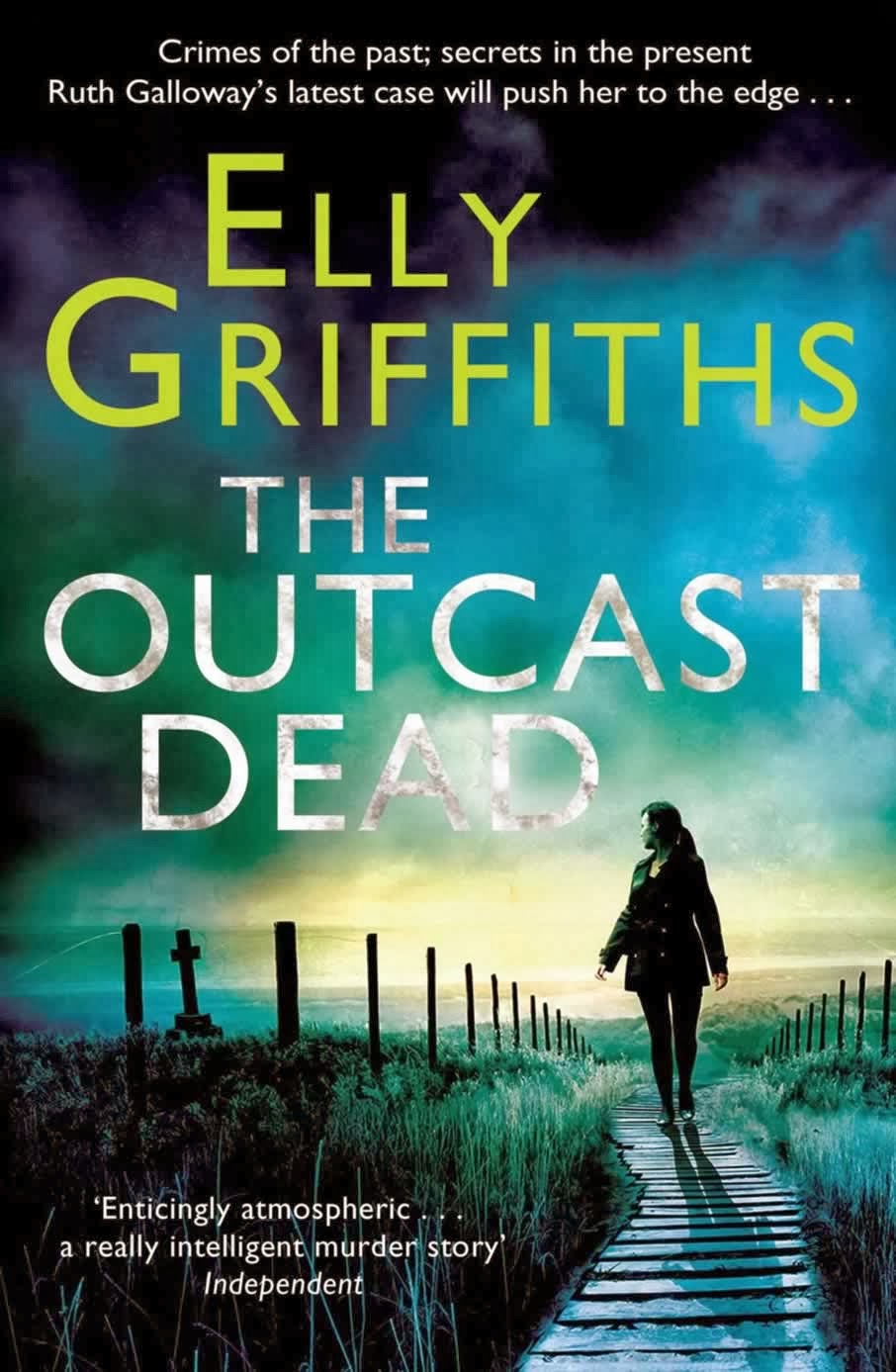 Ruth is involved in a dig in Norwich Castle, and has just discovered a body that she thinks just might be that of a famous child-murderer, Mother Hook. Her instinct is to be cautious, as ever, but her loathsome head of department is courting television (and taking the credit). An appearance on a TV programme called "Woman Who Kill" is just the sort of thing he'd love, and exactly the sort of thing Ruth will treat with considerable suspicion. Though it does help that there's an attractive historian involved. Meanwhile, Nelson is investigating the case of a woman who may have killed her young children. He thinks she's guilty but the first two deaths were accepted as cot deaths and it's only with the latest that suspicions have been aroused. It's a tense situation, and so easy to be seen as crass and insensitive -- not that that really troubles Nelson, but it provokes a lot of hostility around him. Meanwhile, their Druid friend, Cathbad, is still in Lancashire, and both are missing him, though Nelson's not about to admit it, of course.

My difficulty in reviewing this book is that I don't want to give anything away! There is so much going on with all the regular characters, who have all become real people over the course of six books -- even the people you don't like make welcome returns. After all, that's what real life is like. There are some recent introductions, too -- a new police colleague causes tensions within Nelson's team, as you'd expect. And yet again, Griffiths builds up to an absolutely nail-biting ending.

There is some first-rate crime writing around these days, and this series is one of the best. For readers like me, who prefer the background detail of an investigation, and want believable and likeable characters who actually exhibit a degree of personal growth across both the individual book and the whole series, these are perfect. I don't want to spend most of a book inside the head of someone so unpleasant that reading makes me uncomfortable, nor do I want graphic depictions of extreme violence. I want to care about the people I'm reading about. And with Elly Griffiths, I know I will.

I read The Outcast Dead courtesy of NetGalley.