An Academic Question by Barbara Pym 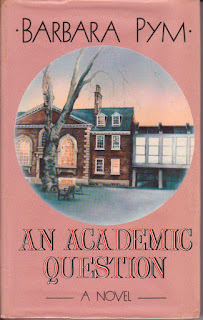 I first read An Academic Question not long after it was published in 1986, absolutely delighted to have a Pym I hadn't previously read. I knew that it was written in the early '70s, coinciding with the time when I was leaving home, though I don't think the world changed as fast between the time of writing and that of publication as it would in the next decade. Mr Stillingfleet's box of papers would still, in 1986, have been entirely in hard copy, inaccessible to all unless he chose to make them available. "Computerisation" is mentioned in disparaging tones.

Caro Grimstone is the wife of an anthropologist at a new university (formerly a technical college) in the west of England, a slightly dystopian institution in a dilapidated spa town with a background rumble of student unrest and a growing immigrant community. Re-reading the early chapters made me think of an old favourite, a television series called A Very Peculiar Practice, in which the elderly head of a campus health practice ruminated on "the sick university" while a pair of nuns in full habits overthrew dustbins and wrote graffiti on walls -- Pym on acid? (If you don't know it, I urge you to give it a try, it's very English and utterly wonderful; I think Barbara Pym, with her jaundiced view of academia, would have adored it.)

I've also just finished A Glass of Blessings, and there are some parallels: like Wilmet, Caro is rather dissatisfied with her marriage. For a start, Alan isn't quite up to her mother's standards, he's of a lower class than Caro is -- but then, Caro herself has proved not to be up to Oxbridge: they met at another, unspecified university and married straight afterwards. Unlike Wilmet, Caro has a daughter, but she's not terribly maternal, and feels that the au pair deals much better with Kate. Caro's another aimless wife -- she could have a job if she wanted but feels that it would probably be pointless work. She does agree, however, to visit the local retirement home to read to the old people, and here she meets Mr Stillingfleet, a retired missionary, whose box of papers just might contain something which would advance Alan's research and give him the edge over his rival. Can Caro get hold of them -- somehow?

Caro's a spiritless sort of girl for a heroine, lacking warmth, maternal qualities, drive, interest in home-making... her mother planted the flowering camellia in the garden, not Caro. Significantly, it's scentless. She's still a recognisable product of the time, I think, but it seems that Pym considered that some of this at, least, might be a problem, as she wrote a second, "sharper", draft in the third person. In fact, the book is an amalgamation of two drafts, completed by Hazel Holt after Pym's death. Holt sees it as a transitional novel, written during the drought years before Pym's return to publication, and Caro as "by nature and upbringing an excellent woman, fitting uneasily into the more contemporary role of graduate wife". There was never much expectation of its being published, in fact, and it's a much slighter work in comparison to everything else by Pym. Which is not to say it's not a good book -- it's actually very much of its time, even if publishers wouldn't have seen in it something to draw lots of readers. The moral question behind the academic one of the title is never fully resolved (I loved, incidentally, a sly reference to a then well-known modern novel in a book otherwise devoid of Pymmish literary quotation). I also welcomed the mention of one of my favourite Pym characters, Esther Clovis, if only in celebration of her demise.

If you're a completist, as I am, this is a must-read. It's also an entertaining read in its own right, but don't go there expecting ladles of Pym-type deliciousness. Or delightful food:


"What's for dinner?"
"Dinner's too grand a word," I said. In my mind's eye I saw one of those dehydrated curries or risottos with which young wives in television advertisements surprised and delighted their husbands at short notice. Fresh from the triumph, as it seemed to be, of having his article accepted, would Alan be surprised and delighted too?

Spending a week with Miss Pym

Barbara Pym is noted, among many other things, for the pleasure with which she describes food in her books, a characteristic which, for her centenary, was celebrated with a virtual tea party on FaceBook. On her birthday, 2 June, enthusiasts all over the world chose appropriately delicious cakes and posted pictures of tea parties in her honour. The best I could do was this, from the first-class waiting room at King's Cross: 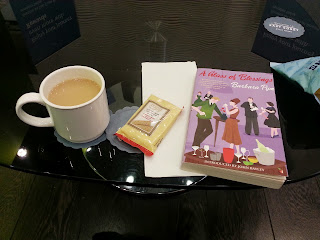 The previous day I'd attended the 40th AGM on the Alliance of Literary Societies, hosted at Barbara Pym's old college in Oxford in the Barbara Pym Society. St Hilda's was the prefect place for such an event, basking in unexpected sunshine which allowed us to have drinks by the river in the evening. We were treated to a dramatisation of two scenes from Excellent Women which drew delightedly knowing giggles from the audience; later, after dinner, representatives from the various societies there read from "their own" authors, with contributions varying from Blake (very brief and apposite!) to Siegfried Sassoon. Since I was there because my membership of the Angela Thirkell Society, I particularly enjoyed the reading by our President, Penny Aldred, on "educated women" -- many Thirkell characters having decidedly trenchant views on the subject.

I was very laden as I waited for my train next day, having as usual acquired various books, including these additions to my complete set of Pym novels: 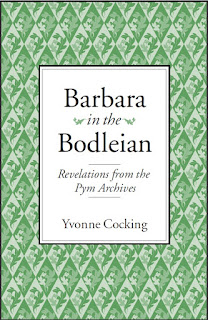 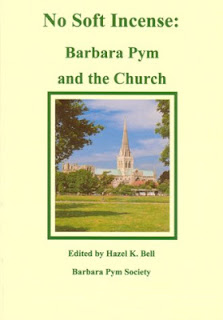 I'd seen Barbara in the Bodleian on the BPS website, and had been hoping it would be there! No Soft Incense is proving fascinating as, throwing an invaluable light on Anglo-Catholicism as it appears in her books.

I was glad that before I went to Oxford I'd read Hazel Holt's biography, A Lot to Ask. I'd read A Very Private Eye when it was first published and, although a lot was familiar from that, it was good to have an outline of her life fresh in my mind when listening to the two excellent talks during the day, BPS chair Clemence Schultze on Barbara Pym: An 'Unashamed Reader', and James Booth on Philip Larkin and Barbara Pym: An Elective Affinity. Clemence Schultze drew attention to the density of literary quotation in Pym's early novels and their importance to her characters, contrasting it particularly with Quartet in Autumn, which is set in a library but no-one really reads. I can't really comment further on this since I am saving Quartet in Autumn to read this weekend, but I'm aware that this talk is already influencing how I read Pym.

The second, highly engaging, talk was on Pym and Larkin - I'd long been familiar with the story that Larkin was one those who helped to restore interest in Pym's writing, but it was interesting to learn that he'd really wanted to be a novelist himself. I'd already been planning to read the two novels that he published in his twenties, but I now intend to do that soon, and alongside my reading of BP.

As well as the biography, I have been reading Pym herself for the last few weeks, first comparing Some Tame Gazelle with A Few Green Leaves, both set in typical Pym territory, the English village, with its church, its clergy, and its women without whom the village institutions would fade. The latter is less funny than the first, but more sharply amusing. Intriguing to know that the infuriating Archdeacon Hoccleve (STG) is a portrait of Pym's great love, Henry Harvey, and that spinsters Belinda and Harriet are Barbara and her sister Hilary. And, indeed, that Pym was imagining herself and her friends thirty years on. It would have been so easy, in the circumstances, to slide into caricature, yet the characters are drawn with such affection and sympathy. A Few Green Leaves, written near the end of her life is, as one might expect, more poignant, but no less sharply observed. I think I feel most for Daphne, the vicar's sister, whose life has been really rather disappointing. I wrote about this book in more detail some years ago.

I went on slightly at random to Excellent Women and A Glass of Blessings -- that last is definitely one of my favourites, with its trio of priests, Fathers Thames, Bode and Ransome and the very, very excellent Mary Beamish who might (horrors!) have a vocation to be a nun (almost straying into Iris Murdoch territory here). Its heroine is Wilmet, a young married woman who feels that the events of life have rather passed her by. Yearning for a little more romance than she has with her husband, a very prosaic civil servant, she persuades herself into being in love with a friend's rather raffish brother but, although he invites her to meet him from time to time, he's unsatisfactory as lover material. Wilmet pines gently between taking tea with various friends and acquaintances, shopping for little luxuries (Wilmet's wanderings, her mother-in-law affectionately calls these expeditions), studying Portuguese in a desultory way and attending church events. Despite her inability to see what's under her nose, Wilmet enjoys observing the foibles of those around her and doesn't entirely lack the capacity for self-criticism. I think this is the crux of Pym's appeal, and why she has such a faithful following: she has the knack of presenting, in her main characters, the sort of internal landscape her readers are entirely comfortable with -- romantic but rational, often self-indulgent but always at core self-aware, observant, questioning, essentially kindly, sometimes foolish... meanwhile, they are surrounded by people who exhibit the kind of faults and quirks we recognise as being present in ourselves to greater or lesser degree. Her treatment of all her characters is empathic.

I moved on to An Academic Question - a re-read, but I need to collect my thoughts before posting about it. And to decide which to read next...