A Taste of Beirut by Joumana Accad 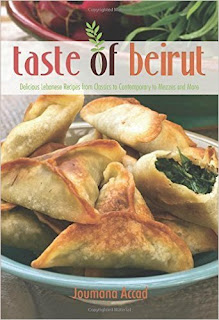 As an introduction to Lebanese food Joumana Accad's book provides both basic recipes and a wide selection of everyday and more special dishes, accompanied by some mouth-watering illustrations. I found it a leant a little heavily on the American experience of what was available and cooking terms, but it's easy enough to get ingredients over the internet these days if you don't live anywhere that sells Middle Eastern foods – for instance I was able to find the spice mix zaatar quite readily.

There are some American adaptations: for instance a po'boy sandwich, and I found the use of a pineapple a bit surprising in one dish. But there's plenty that's authentic even while allowing the use of canned chickpeas rather than the dried version, in recognition that not many households can spare someone to cook all day!

The book starts with a list of staples: breads, rice varieties, couscous etc with a guide to how they are used, before tackling the basic recipes that turn up as elements in many dishes: mint or coriander pestos, walnut sauce, garlic paste and so on (though I must admit to using garlic paste out of a tube rather than making it), with directions for how to keep an excess quantity so that you can make a batch rather than a single recipe's worth. Dough and basic meat pastes are included in this section, so by the end of it you’ve had a pretty good grounding in both ingredients and methods. I was pleased, too, to see my favourite pilaf here, ruz bel-sh’ariyeh, made with rice and vermicelli – it sounds plain, but it’s a superb accompaniment to a stew.

Breakfasts and snack foods (lunches, sandwiches, soups) come in the next chapters, before a fairly lengthy section on mezze, which seems an appropriate reflection of its importance in Lebanese cuisine. I found this a particularly attractive section and instantly wanted to start planning a party to share all these delicious recipes – I do like finger food!

Main courses next, and I have resolved to try making kibbeh again – Joumana’s instructions look much better than those in the recipe I followed last time, and she has a whole page of illustrations showing how to score it beautifully. Here I noticed a couple of concessions to western preferences for lower calorie foods which I approved of. I’m inspired by the roast turkey recipe (habash w-hashwet al-ruz) to try in this Christmas, served with spiced rice, nuts and chestnuts, and I needed no persuading that yakhnet-al-arnabeet (cauliflower stew) would be enjoyed by the family. Roasting a cauliflower does something quite wonderful to it.

I must admit to being less interested in puddings, as we don’t eat them much, and I found that many looked too sweet for my taste. It doesn’t matter though, there’s so much else in this book to try, and to enjoy. The author has a website, too, with more recipes.

My copy came courtesy of NetGalley.

I'm back, and after such a very long hiatus! I can't believe it's almost a year since I last posted here - the time has absolutely flown by and, although I've missed the contact that blogging encourages, I have mostly stayed in touch with people, intermittently at least, on Facebook.

What's new? Well, not much of significance, life continues along its usual, slightly bumpy path. The biggest change, I guess, is that we lost one dog - darling Molly, to old age - and gained another.

Here's Moll, aged fourteen, four months before she died (with her faithful Pip in the background): 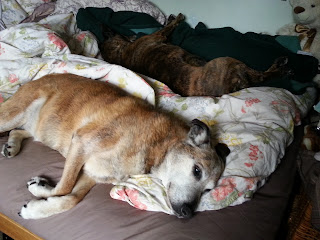 When I took that picture we knew she wouldn't be with us for much longer, and that we would almost certainly have to make difficult decisions. She was a dear girl, with an almost infallible gift for being in the way.

Pip was quite prepared, we discovered, to nobly move up to the position of only child and my Dearly Beloved, wielding the bit of paper that says he's a qualified psychologist, insisted that it would be bad for her to be alone for long. Not only that, he said, but we should get a puppy. It would be harder for Pip, he opined, to adapt to a dog closer in age to herself. All this rather ignored the fact that Pip (aka Princess Sniffy) really didn't wish to adapt to anyone, thank you very much. There was a large element of selfishness on our part in wanting another dog immediately, as Pip has had a longstanding diagnosis of mast-cell cancer - in fact, we've been unbelievably lucky with her, in that what looked like an invasive cancer has proved to be relatively quiescent, and at nine she is a bit arthritic but otherwise quite capable of tearing off after a pheasant.

So although I wanted a rescue greyhound, we found ourselves lurcher-puppy hunting. We just missed one at the local rescue while I dithered, and it started to look as if we'd be in to 2015 and still puppyless. Then in late November - just after I stopped posting here, I wonder why that could be? - I spotted a local ad for lurcher puppies. By the time we contacted the owners there was only one left, despite them only being born on 30 October, a small black bundle with derpy ears: 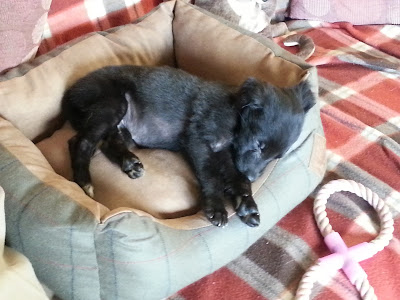 You know, I don't think my Dearly Beloved would have brought him home if he'd gone to look on his own, I think he forgets that all pups are just little damp, slightly smelly balls, but "It's a puppy..." I said, and suddenly we had to think of names, and wonder how he was going to get on with the cat.

Cuddy, named for our local Saint Cuthbert, immediately adored both cat and Pip, and puppy and kitten embarked on wild games all over the house, while Pip escaped upstairs, behind the dog gate, for a quiet life. By Christmas, puppy was growing like Topsy, and had turned out, despite his initial, diminutive size, to have a Very Large personality. Tigger would have been a better name, he undoubtedly "always seems bigger because of his bounces" and has even managed to make me warm to the Disney version of Tigger, whose "top is made out of rubber, and his bottom is made out of springs". Here is the bouncing boy at ten months: 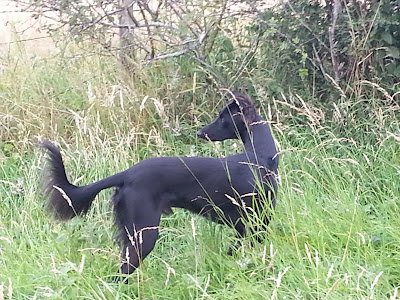 We knew that his mother was a saluki lurcher, but we had no idea he would turn out like this, nor that the little rat-tail which began to develop a little tuft at the tip would turn into a graceful and silky plume. Nor that he would be the most loving and cuddly creature imaginable.

I had intended, on this first post, to mention the dogs in passing, but they took over. Where Cuddy is involved, that's inevitable. As you may surmise, we are all besotted. Anyway, I think I'd better save other developments of note for another post. And I shall get back to the main subject of this blog, books, very soon, I promise!

By the way, past readers may notice a minor make-over has taken place, but the underpinnings are all essentially as they were.