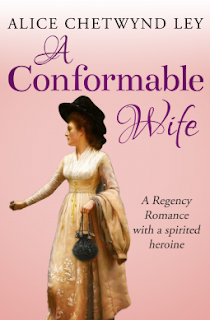 Somehow or other I missed Alice Chetwynd Ley's books when I was younger, and A Conformable Wife is the first of hers I've read. It will not, however, be the last, for I found it charming.

It is very much in the style of one of my favourite authors, Georgette Heyer, including the familiar formula of eligible young woman meets eligible bachelor, sparks fly, there are obstacles to overcome before they, and we, reach the inevitable happy ending, and so on. Like Heyer, I'm sure that Alice Chetwynd Ley's books will explore the many possibilities offered by this pattern in very entertaining fashion, and amongst her books I will expect to find mistaken identities, dastardly villains, abductions (usually foiled), misunderstandings between lovers, young men going to the bad through gambling... all the vicissitudes which Georgian society can throw up, and all leavened with humour and warmth.

The attraction of the Georgian period is, I guess, that some women were beginning to have a small degree of autonomy, particularly if they were widowed, when they might respectably manage their own incomes unless very young. It was also a time when women were beginning to write for publication, so we have, in their own words, the start of a recognisably modern, female sensibility. The rising middle class was a factor too, as more and more people became wealthy and respectable while not necessarily belonging to the aristocracy - though it obviously helped if you could marry a duke's daughter or a younger son, the latter almost invariably in need of an urgent injection of merchant-class money.

In A Conformable Wife, the Hon. Julian Aldwyn has decided that it's time he was married, and seeks a suitable wife, one able to manage a large household, and of respectable origins, obviously. His sister suggests her girlhood friend Henrietta Melville, who has kept house for her family until his death; despite being wealthy in her own right she now lives in her family home as a dependent relative of her brother and his resentful wife - it's not easy when the servants all defer to the former, instead of the present, mistress. Aldwyn, who in modern terms is positively phobic in his avoidance of love, having been once-bitten, proposes a marriage of convenience, since this will provide the rather dowdy Henrietta with her own establishment, and besides, they seem to get along quite well together. Henrietta retorts, in essence, that she's never had any fun in her life and doesn't see why she shouldn't have some now, and anyway, she'll marry - if ever, which at twenty-six, she doubts - for love, thank you.

Thus the stage is set for all the required elements, and the action moves to Bath, which is rather livelier than the family home. Henrietta embarks on a makeover, so that Julian fails to recognise her when he eventually turns up, and he's duly horrified by the number of conquests she has made. Need I say more?

Chetwynd Ley, like Heyer, is careful about her period detail, although - here, at least - she doesn't wield cant with such bravura. Perhaps she prefers not to compete? At any rate, readers shouldn't find themselves jolted out of the Regency by the annoying anachronisms which are all-too-common nowadays. Bath is well-portrayed and researched, but not in distracting detail - the author feels no need to show off her scholarship. Altogether, A Conformable Wife turned out to be an excellent place to begin my acquaintance with this author, and I look forward to many more of her books. My thanks to Sapere Books and NetGalley for my review copy.
Posted by GeraniumCat at 16:31 No comments: 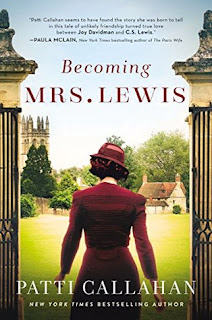 I saw this title on NetGalley and was interested as I'm one of the many who grew up on the Narnia books, progressed to C.S. Lewis's adult books and later enjoyed the film Shadowlands, about his marriage to the poet and author Joyce Davidman.

What I hadn't realised when I requested the book was that this is a fictionalised version of that story, though it makes much use of letters between the two from their first correspondence - Davidman wrote to Lewis because his description of his religious conversion struck an immediate chord with her. He replied, and a lengthy and intimate exchange grew up between them. In many ways, fictionalisation is a good choice for biography - it serves to remind us that any account of another's life is necessarily a fiction, even when we have their writing to base it on (come to that, it's the case even when they've written it themselves). Initially though, it gave me some problems, because I found it rather overwritten - later, I told myself that Davidman (events are told in the first person, from her point of view) was, as a poet, given to wielding words dramatically, so a degree of self-dramatisation was appropriate.

I think the book's author,  Patti Callahan, admired both Davidman and Lewis fairly uncritically, so I found myself reading between the lines quite a bit. Not with the sort of vilification that met Davidman when she had the "effrontery", as many saw it, to marry Lewis - they seem to me to have been a very successful couple, despite his qualms about her divorced state, their relationship being a genuine marriage of two minds - but I found Callahan's version of Joy quite hard to like, and I think that might well hold true for the real person. But then, I find Lewis quite hard to like too, if I'm honest - though the Inklings fascinate me and I find them eminently readable, I don't think I would actually like any of them.

I suppose my biggest problem was with the account of Davidman's first marriage, to fellow author William Gresham. He certainly comes across as a pretty loathsome person, but I suspect that during the time they spent together they would both have seemed, to me at least, self-centred and histrionic, probably bringing out the worst in each other. After her conversion to Christianity (she was Jewish, non-practising, and had flirted with communism – a much greater sin in the US than here in the UK), Davidman left her husband and two some for an extended research and writing trip to to the UK, during which she planned to meet Lewis in person. I can understand that she felt her writing was suffering at home, and that she needed to write to earn, but still found it hard to reconcile the length of time she was away from her children, particularly since there were already signs – according to Callahan’s account, at least – that at least one of the children feared their father, who had an explosive temper and was possibly a suicide risk.

Readers who share the Lewises' religion will almost certainly enjoy this retelling of their relationship, while those who, like me, are interested in the Inklings will find much of interest, albeit secondhand. I imagine for many it will provide an impetus to go back to Lewis's own non-fiction and some may be inspired to further explore Davidman's poetry, which is oft-quoted, which didn't appeal to me. I did, however, find a previously unread author amongst Davidman's Oxford friends (unfortunately, long out-of-print and therefore almost unobtainable). I found myself sympathising again with C.S. Lewis's brother Warnie who, although much troubled, seems to have been a gentle individual, and enjoyed an American's impressions of the shabby shambles in which the Lewis brothers lived in peculiarly English fashion. At one point I had wondered whether to give up on the book altogether. I’m glad that I didn’t, because I did end up enjoying this rather poignant story. Thanks go to NetGalley for providing me with a review copy.

Posted by GeraniumCat at 14:21 No comments: