I seem to be saying this constantly these days, but I have done so little reading recently! At the start of April I was full of intentions: I was going to get the conference that I was organising out of the way, then clear up the loose ends of the old job ready to embark on a new life as a full-time freelance, and I was going to make sure I had time for all the things I had been missing out on - blogging, gardening, going out occasionally. So what went wrong? Well, during the conference I developed a pain in my lower back and hip. I've had trouble with my right hip for years, leading to occasional bouts of sciatica, but this was on the other side. I didn't pay it much attention, to be honest, but next day (after the conference my sons and I were having a long weekend in London) I had to abandon our undemanding shopping expedition to go back to the hotel and lie down. I managed the next day - a visit to the National Maritime Museum at Greenwich, where there was a wonderful exhibition of Ansel Adams photographs - though I barely got round the exhibition itself, I found a good place to sit and enjoy some boats.

It was the Ansel Adams we'd gone to see, but on the way round to the gallery to see it, all three of us suddenly and completely lost our hearts. Never before have three people fallen in love so instantly and unexpectedly, I'm sure, and our shared aesthetic, though generally pretty similar, has rarely been quite so synchronous. The object of our adoration and desire was this: 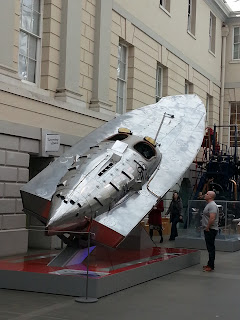 The Miss Britain III was the power boat which in 1934 became the first single-engined boat to travel at over 100 miles an hour, a record it held for 50 years. It was powered by a Napier Lion aircraft engine, which is also on display, but it's the boat itself which is the thing of beauty, streamlined and aluminium-clad. It's the boat equivalent of Muzzlehatch's car in Titus Alone, a steampunk dream. Younger son came home with hundreds of photographs, but the two here were mine. 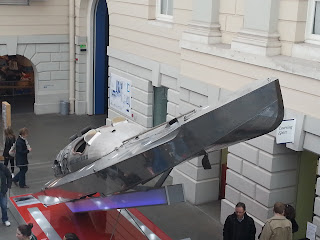 There were other delights at the Museum as well, but nothing else that left us dry-mouthed. Prince William's barge was shiny and entrancing, and I could have happily have spent several hours taking pictures of details like this golden sea-lion. 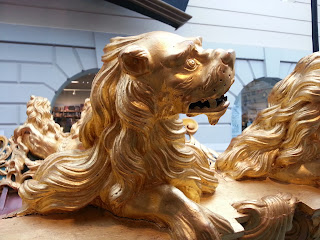 The figureheads were fun, too - I particularly like the goose, and wonder about the person who chose such such a creature for his vessel. 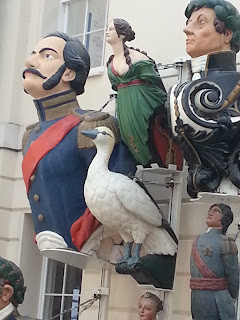 Anyway, but to the blogging saga (or non-blogging saga). When I got home from London, a month ago, the sciatica got much, much worse, and for some days I was in so much pain I could hardly even concentrate on reading. OH very kindly went out and bought me magazines, and happily, I had a new toy to play with in the form of an Android tablet, so I could keep up with Facebook. Finally, by last Monday I was able to go and hobble round the grounds of Paxton House and enjoy the spring flowers. Only one picture from there, a view of the Tweed, because you need practice to walk with a stick and use a cameraphone, I find! 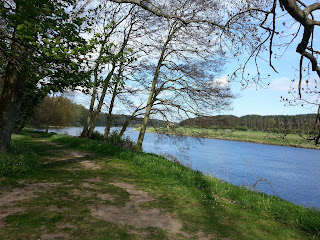 The result of all this being laid up, and only being able to use the computer for short periods, is that I am still finishing up the old job and have had little time for my own work beyond getting a rudimentary website up to deal with any enquiries, and a bit of following up on some useful leads kind friends have suggested. But at least I'm reading again, and there will be some posts for Once Upon a Time VII shortly. The Barbara Pym reading week is approaching rapidly too, hosted by Thomas at My Porch and Amanda at Fig and Thistle. I've already started reading, with Hazel Holt's biography A Lot to Ask already behind me; I'm re-reading Pym's autobiography, A Very Private Eye, in chunks, too, alongside the novels. Rather eccentrically, I started those near the end, with a re-read of A Few Green Leaves (reviewed here), because I want to compare it to her first novel, Some Tame Gazelle, since the setting is very much the same, an English village with various ladies and vicars. I want to see how differently she treated the subject towards the end of her writing life. I think this may become an exclusively Pym zone in June, in fact, so I'd better get in some other posts before then!