After my long absence

I can hardly believe that it is a whole month since I had time to post anything here! It wasn't intended to be such a long absence, I have just been constantly busy, though I didn't quite realise for how long. The house is in terminal chaos, the chicken run needs mending, I have barely even thought about Christmas and a Devon/London trip looms. This evening, though, I have just sent a piece of typesetting off to the publishers and I have an hour when it's not worth starting something new - how nice.

I have managed a little reading in the course of the month - there have been a few godsends which have kept me going in the middle of the night, when my brain wouldn't stop, so I did put in a very quick visit to the library mid-month (well, I had to go in because they had some books for me). Susan Hill's Howards End is on the Landing was a huge pleasure, describing her year of "reading from home", which I considered emulating, since the house of full of books whch no-one is reading, and the TBR piles threaten to take over. However, in the past I have spent quite long periods relying on what was to hand so I decided to wait until it was a forced choice. Susan Hill was good company while I read her book - I didn't always agree with her choices (at the end of the book she includes a list of 40 books she couldn't do without), but her reasons were cogent, and I enjoyed the arguments which took place in my head. Lovely cover, too. I followed up with the third of her Serrailler novels, The Risk of Darkness - rather than a series of standalone books on unrelated crimes, her books should be read in order (and for once, I am doing so). They started out very well, and are getting better. Serrailler is a convincingly fallible hero, attractive but flawed.

At the opposite end of the crime spectrum were Alexander McCall Smith's The Careful Use of Compliments and Catriona MacPherson's The Burry Man's Day. I thought I had read former, but happily I got it out of the library anyway (it would be a soothing re-read, I reasoned) and was delighted to find that it was new to me. I am not at all sure I agreed with Isabel's actions when her job as Editor of The Review of Applied Ethics was threatened, but I certainly sympathised with them. Then I settled down to the second Dandy Gilver mystery full of eager anticipation, and I wasn't disappointed - I love the setting, Scotland in the 1920s, and Dandy's mix of aristocratic arrogance, sound common sense and a sense of humour, much as if Nancy Mitford had taken to detective stories. They are great fun - I'm about to embark on the third.

The last Angela Thirkell, Threescore and Ten, was a bit of a curate's egg - the

first half of the story, written when she was old and ill, lags distinctly, the "divagations" for which she was famous being not so much digressions as quagmires. She left it unfinished on her death, and her friend C.A. Lejeune took over and completed it at a much brisker pace.

I knew of Sarah Quigley as a poet, so when her name caught my eye on the library shelf my interest was piqued. Shot tells the story of Lena Domanski, a comedian from San Francisco, whose world disintegrates when she is accidentally shot. Her body recovers but her sense of self is fragmented and she no longer wishes to earn her living by being funny; her interest in in loss, both her own and that of other people. Eventually she sets off to Alaska with a camera, and finds both tragedy and fulfillment. Finally, A Bit of Earth by Rebecca Smith is another story of loss: a botany lecturer loses his wife in an accident and is left alone with their small son, to muddle along in a state of abstraction and distress. Young Felix Misselthwaite (nice Secret Garden reference), isolated and unhappy, is saved by his love of the university's neglected botanic garden, where he finds friends animal and human. These two books are about loss and fragmentation, approaching personal disasters from very different angles, but they are also about the redemptive power of the human spirit. I recommend both.
Posted by Jodie Robson at 16:58 6 comments:

I'm nursing a cold and preparing for a London trip, so have neither time nor inclination for "proper" writing today. Juxtabook mentioned that the IBooknet blog has been revamped, so I went to have a look (very nice, guys!) and found this meme there.

The book that’s been on your shelves the longest
Winnie the Pooh by A.A. Milne – I don’t think there has been a time in my life when I haven’t had a copy close by. The House at Pooh Corner is there too, of course, and the two collections of poems, and I find bits of all of them running through my head in the most unlikely places.

A book that reminds you of something specific in your life (a person, a place, a time)
Beside my bed I have a copy of Myths and Legends of Ancient Greece and Rome, which my father gave me when I passed the 11+ exam that was the bane of children’s lives in those days. We had a dragon of a teacher, so it was also a reward for surviving her, I think! It is a lovely book, and although my interest in mythology didn’t start there, it certainly fuelled the fire. 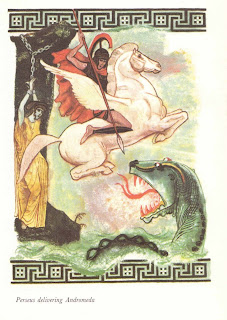 A book you acquired in some interesting way
Because I found this meme on the IBooknet blog, it immediately made me think of a book I didn’t acquire. One of my regular visits when I’m in London is to Cecil Court, home of a number of secondhand bookshops, where a couple of years ago I saw a familiar cover in the window of one of them. It was a children’s book by a well-known author and illustrator, and a note on the cover said that it was an unusual copy because it was signed by the author with a message to a young boy, probably a family friend I was pretty sure I knew who this was and went in and asked to look at the book – and yes, it had been given to my stepbrother when he was about 5 years old; I recognised it because he had been named after the author’s most famous character, so that the inscription made the book unique. Unfortunately, the book had been stolen from his flat some years ago, and sadly, my stepbrother died in 2003. It would have been lovely if I could have bought it back (having no proof, some 20 years on from the theft, of my somewhat odd story), but even though the bookseller suggested that we might discuss the price (!) it was completely out of my league. I wonder, though, if its provenance was enhanced by my story.

The book that’s been with you to the most places
Well, Winnie the Pooh, along with a small collection of other children's books, has been with me in every place I’ve ever lived, but the book that has covered the greatest mileage is probably a short collection of the poems of Gerard Manley Hopkins, which was slim enough to fit in the smallest shoulder bag so that I carried it everywhere. If I finished my book because the train was late, there was Hopkins to fill the gap, and he did it admirably. When I'm not reciting A.A. Milne in my head, Hopkins is next choice. You can easily spot me on the East Coast line, beating out the sprung rhythm of The Wreck of the Deutschland, and muttering when I can't remember the next line. 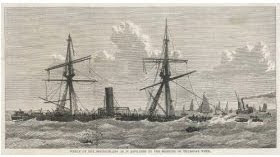 Your current read, your last read and the book you’ll read next
The Graveyard Book by Neil Gaiman was the last book I finished – I’d been saving it up for Hallowe’en week and it was worth it. Current reading is patchy: I’m dipping into some of Agatha Christie’s Miss Marple stories, and reading Cucumber Sandwiches, a collection of a novella and three short stories by J.I.M. Stewart, who also wrote as Michael Innes. My next book is Kept: A Victorian Mystery by D.J. Taylor – a fellow blogger (I’m afraid I can’t remember who) recommended another of his books, I think, but the library didn’t have it, and I liked the sound of this one. Fingers crossed.
Posted by Jodie Robson at 18:05 7 comments: