Among last year's casualties were a number of books I'd been planning to review, so alongside some reviews of recently read books, it's time to put that right, because there's some writing that's much too good to miss. And although I'm not approaching them in any particular order, we'll start with an absolute gem. 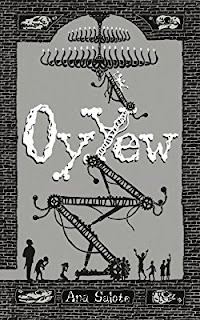 Quite early in 2016, Ana Salote asked me to review her debut children's novel, Oy Yew, and when I read the description and saw the cover I was pretty sure that I was going to like it. Before I go any further, not only do I adore this cover, but I loved the physical look and feel of the book, beautifully produced by Mother's Milk Books, a small publisher which aims to "celebrate femininity and empathy" by producing a small range of carefully chosen books.


Oy was slight, weakly, overlooked. He had thought himself some kind of ghost till one day, when he was about seven (he guessed), someone saw him.
"Oy, you," said the girl. Startled, he had slipped away, through a gap, into a yard, through a hole, into the innards of a half-collapsed shanty. There he survived on crumbs and smells until, some years later, he was seen again.

Doesn't that make you want to read on? From that moment on, I was completely on Oy's side, willing him to find a better life. Unfortunately, when the second sighting happens, he is netted by the waif-catchers, older, stronger, faster children for whom capturing waifs is a sport. He is taken to a factory where, for the first time ever, he has someone to talk to. But he's not there long before he's sent on to work for the factory owner, Master Jeopardine, in the "big house".

Oy Yew is a book rich in influences and echoes: first and foremost, for me at any rate, is Charles Kingsley's The Water Babies, but there are also echoes here of the less well-known At the Back of the North Wind by George MacDonald. Both Dickens' and Peake's influence is clear in the glorious nominative determinism of the characters: Mrs Rutheday, Mrs Midden the cook, Miss Spindle and, of course, Jeopardine himself. Shades of Joan Aiken's Black Hearts in Battersea series, too, and Leon Garfield's Smith - all those wonderful dystopian, steampunk-y alternate histories which allow authors to explore complexities in a setting untrammelled by modern mores.

Amidst all this baroque extravagance of naming and setting, Salote keeps a firm grip on her story. The child characters are easy to care about and the creation of the microcosm of the big house and the wider world, which the children mostly know only by rumour and vague memory, is convincing and intriguing - where do the raft children come from? and where do they really go when they grow too large to be classed as waifs? And most of all, of course, who is Oy? An uncertain future lies before them all, always supposing they survive in the first place - it's a dangerous world, and waifs are cheap and disposable, there's always another climbing boy if one has a fatal accident. Or, perhaps, shows too much curiosity.

I've said before on this blog that I think some of the very best writing today takes place in the world of children's books, and I continue to be optimistic about the future of books when writers as good as Salote keep emerging. The sequel, Nondula, is due for publication shortly, so this is the ideal time to immerse yourself in Oy's world.
Posted by GeraniumCat at 16:25 No comments: