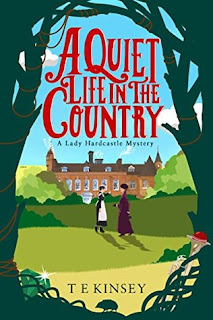 The Lady Hardcastle books are proving to be a very enjoyable series. I received the latest, The Burning Issue of the Day, from Netgalley, but before I read it, I finished all the earlier ones first.

The first book, A Quiet Life in the Country, introduces us to our two main characters, widowed Lady Hardcastle  and her diminutive but capable ladies' maid, Florence Armstrong, and to the English country setting, but it breaks the mould in fun ways: the country house to which they move is a new build, Lady Hardcastle has a racketty background spying for the Empire, Armstrong has been trained in martial arts by a Shaolin monk, the local Inspector of Police actually welcomes their help. Events are narrated by Flo, with a general sense of irreverence:

I was up with the lark on Saturday morning, and resolved at once to make enquiries as to the sleeping habits of larks. Do they really rise early? ‘Up with the lady’s maid’ might be just as evocative of early rising but perhaps open to unfortunate misinterpretation.

The period setting (1908 at the start of the series) is well done in an understated way - it's become fashionable to give lots of detail, but here it's sketched in fairly lightly, which is fine, and the odd anachronism is either knowing, or too incidental to rankle. Perhaps there's a little too much mixing of the social classes, but the nouveau riche are, accurately enough, vilified by pretty nearly everyone, while the local country folk get ‘salt of the earth’ treatment.

The mystery is slight (apparently the original version of the book was episodic but it's been streamlined into one in this edition), with a certain amount happening off-stage, but it's coherent enough to be entertaining. All in all a good start to a series, and more than amusing enough to carry the reader on to the next instalment:

‘...we can be detectives. You can be Watson to my Holmes.’ ‘But without the violin and the dangerous drug addiction, my lady,’ I said. ‘As soon as the piano arrives from London that will make an admirable substitute for the violin. And I’m sure we could both have a tot of brandy from time to time to grease the old wheels.’ ‘The slow-grinding ones?’ ‘No, ours shall be lightning fast.’

The relationship between eccentric widow Lady Hardcastle and her maid is a joy, and the trickle of backstory elements always leaves one reader wanting a bit more. I was pretty much hooked from the very beginning, as Lady H and Flo find themselves a new house and set about furnishing it (including, of course, with daily help and cook). The exchanges between them are always beautifully judged and are full of gentle acerbity - for instance, Flo rarely refers to her employer as ‘my Lady’ except when she disapproves of her actions, they bicker over who is to drive the new car, and so on. One has the sense of a long-established relationship based on mutual respect and affection, and a certain amount of saving each other's skins:

‘You’re welcome, my lady. I shall yell uncouthly when breakfast is served.’ ‘We need a gong.’

The second book, In the Market for Murder, is also episodic, offering four short mysteries, and consolidating the rapport between the reader and characters. The cases mostly centre on their local village, with cattle markets, pub ghosts, cricketing trophies and so on. By book three (Death Around the Bend) however, we are given a ‘proper’ full-length mystery, as Lady Hardcastle and Flo are invited to join a house party for some motor racing, and this offers a little more room for development of the subsidiary characters, which is all to the good since the reader then starts to care about the ‘who’ and ‘why’ as well as the ‘how’. Flo is in the ideal situation of course, when a murder is committed, to hobnob with the servants and get all the gen on family and visitors, as well as on the staff themselves. 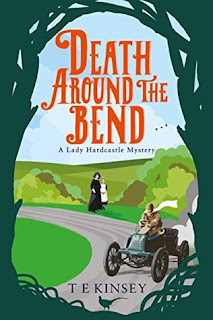 A short story, Christmas at the Grange, follows, with Lady H visiting friends for the festive season and Flo in attendance like a good lady's maid, but able, as before, to move with ease between above and below stairs (although Sir Hector takes a very unholy delight in offending his sister by including Flo in the festivities). As Christmas stories go, it’s a good ’un.

Book 4,  A Picture of Murder, finds Lady H and Flo offering to host a visit by some moving-picture makers as their friends, the Farley-Strouds, have unfortunately had a kitchen fire. (Lady F-S doesn’t take advantage though, she lends a surly maid and a more amenable footman to help out, the Hardcastle establishment only running to part-time help.) Even for our intrepid heroines, who stumble over murders at the drop of a hat-pin, the rate at which their guests start to meet untimely ends is a bit disconcerting, especially when there’s no motive that makes any sense. The cast of subsidiary characters is beginning to look like old friends, by now, and we’ve definitely started to get to know the village of Littleton Cotterell. We get some more about the past, too, with perhaps a presentiment of trouble to come?

With the fifth in the series, The Burning Issue of the Day, the author takes the light-hearted amateur detectives - we know by this time that their background has been much more serious, but they have retired from living on their wits in the service of HMG - and gives them something a bit more serious to get their teeth into. A death has occurred which may have been the result of suffragist sabotage, and a young suffragette is on trial for her life. Can they save her, despite the opposition of the (male) Bristol establishment? I felt that the author genuinely wanted to talk about the suffragist cause and that it wasn't simply a subject to hang a mystery on. Kinsey re-introduces a character from A Picture of Murder, the journalist Diana Caudle who, despite initially clashing with Lady Hardcastle, looks set to put in appearances in future episodes. She fulfils the role of ambitious young career woman, nicely complementing the two more in-period ladies.

I see there is another on its way - good-oh!