Too late...and The Moonstone by Wilkie Collins

I feel that the time for a round-up of 2012 has passed. Since the start of the year my energies have been taken up in trying to plan for the future while preparing to hand over 20 years of accumulated "stuff" to someone else. At the same time there are grant applications, a conference to organise, membership renewals to chase, newsletters to be written...I'm still doing all the things I would be doing if I weren't leaving plus a whole lot of extras. Which may well mean that I don't appear here much until after it's all over. I'm trying, too, to prepare myself for change, to think about business plans and strategies, but although I want to throw myself into that, I shall have to be patient!

Reading has inevitably suffered. I find myself picking something up and reading a hundred pages or so and losing interest. Nothing wrong with the books, they are just failing to hold my attention. So there will be a lot of re-reading and comfort reading, I guess (it's a pity I used some of the best candidates up while I was waiting for news from work last year!) and quite a bit more giving up half-way. I shall aim to finish my Century of Books this year, and I plan to re-read all of Barbara Pym's novels in celebration of the 100th anniversary of her birth.

Current reading is The Moonstone, by Wilkie Collins, which is proving very soothing and just what I need. It's a long book but doesn't feel it, and is told in several voices, not, as might be done today, in alternating chapters, but in parts. Part one is told by a much-loved old family retainer, part two by an infuriatingly evangelical cousin, three by the family lawyer and so on. They are all to some extent partial observers, if not necessarily to be entirely distrusted, but they each tell the story to which they are witnesses while the person who is the main actor, Rachel Verinder, remains a rather shadowy figure whose motives are hard to interpret. 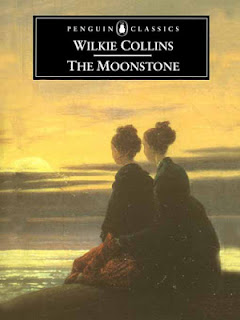 It manages to be Dickensian -- full of lurking strangers and shivering quicksands -- without an extensive cast of characters and multiplicity of subplots, so events move along quite briskly while the reader tries to work out who can have stolen the huge diamond that Rachel inherited on her eighteenth birthday. On this reading I found myself being very aware of the various devices used to set up later events - much more so than I generally am, I'm a very passive reader as a rule. I can't decide whether that means that Collins is particularly transparent or just that I was in a noticing state of mind! I was also very conscious, and more critically so, of the Moonstone itself - to the Indians who seek it, it's a stone of great spiritual importance, and it's always acknowledged that John Herncastle stole it from the temple at Seringapatam. As the intact stone, the form in which it is precious to the Indians, of course, it is flawed, whereas broken up and re-cut it would simultaneously become of immense value and be rendered powerless. As a metaphor for the role of British in India, I find this chilling.

I'm not going to write further about The Moonstone, much as I like it, because there are masses of excellent reviews of it already. I've listed a few below. Meanwhile I have also been reading a new(ish) children's book, The Salt-Stained Book, which I absolutely love, and reviewed yesterday at Hurlyburlybuss.

Some more views on The Moonstone:

Some odds and ends of news

While I struggle to write a round-up post for 2012, here's some news for US readers - Thomas at My Porch has been culling books (I'm astounded and filled with envy at such resolve!) and has two Whipples to give away, The Priory and Because of the Lockwoods. You can read his reviews of both books on his site.

Thomas describes himself as "banking" obscure and unloved books, a statement which fills me with warmth and fellow feeling -- I can't describe the pleasure I have when I fall in love with some book that everyone else has overlooked, or when I read about one on someone else's blog and have to scour the internet to find a copy. I don't have much hope of finding the next Persephone - I realise that my taste is idiosyncratic and that anyway my especial favourites already have a loyal readership. However it delights me that recent editions of, for instance, the books of Stella Gibbons, Noel Streatfeild and Angela Thirkell may be finding new readers.

Since this is the traditional time of year for making resolutions, I thought it might be an appropriate moment to mention that this is an excellent time to finally get round to subscribing to those literary societies you've been meaning to join for ages, since many of them have membership years which run from January. If you need a reminder of societies in the UK, there's a useful list of them at the Alliance of Literary Societies. It might also be a good moment to tell you that, rather by accident, I have become the new editor of the journal of the Angela Thirkell Society, so I'm afraid you'll just have to make allowances if I keep banging on about her books.  I'm going to celebrate the 100th anniversary of Barbara Pym's birth by joining that society, taking part in the reading week hosted by Thomas and Amanda, and -- I hope -- going to the ALS meeting in Oxford which will be hosted by the Barbara Pym Society in June.

While I'm telling you things, I'd better add that I shall be joining the ranks of the unemployed in May, since the funding for my job has been axed. Despite having known that it was likely to happen sooner or later, it still managed to be something of a blow - at 58, the prospect of job-hunting is rather daunting, and one of the reasons I had stayed for a long time in an interesting but poorly paid job was that it allowed me freedom to work from home in recent years, making it easier to visit elderly parents at the other end of the country, or to be here when my husband goes through one of the bad patches which can leave him pretty much immobilised. So I'm planning to freelance as  a copyeditor, proofreader and typesetter (work which I've been doing in my spare time for years), but also to develop a more creative role as well. As a result, time for blogging may become a bit limited over the coming months -- I'd like to do more in the garden, too, after nearly 20 years of being unavailable just when most needs doing. Generally by the time I get out there each year the weeds are waist height and my motivation shrivels!

Finally, since it's the start of the year I think we're due for another gratuitous dog picture. Well, we'd better have two, actually, or else Senior Dog will be miffed, which is outrageous, really, since if you so much as try to take a sneaky pic with a phone she is instantly sitting two feet in front of you with a cheesy grin, so it's impossible to get arty shots, or even, as yesterday, an appealing picture of them lying back to back in front of the fire, maximising warmth. In these two my son was experimenting with a new camera last year and both dogs had got rather bored, although Princess Sniffy (aka The Bolter) knows that cameras only exist so that she can be admired by more people. (Yes, I know she's a plain little whippet-y lurcher, but she thinks it's the face that launched a thousand ships, hence the Garbo-esque expression...). Senior Dog is just lying there thinking, "I'm eighty-two, you know...". 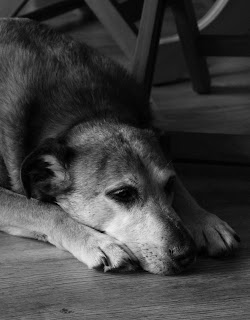 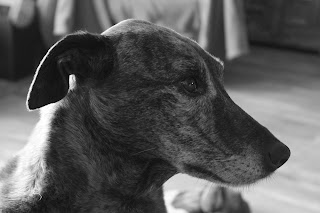