What I did on my holidays

Actually, this is a post that I wrote some time ago, but I thought I would upload it now, as there's likely to be more on Edwardian clothes and the Great War here in the coming weeks, as they are both featuring quite heavily in my reading.

Early summer got very intense as I became more and more involved in the production my son was in at the local theatre, a new musical about World War I called Sam & Isla Forever. My involvement began when I lent some Edwardian clothes for use in the production -- as advance publicity, and to start to make a record of my mini collection of antique clothing, we arranged a photo shoot with some of the girls from the play: 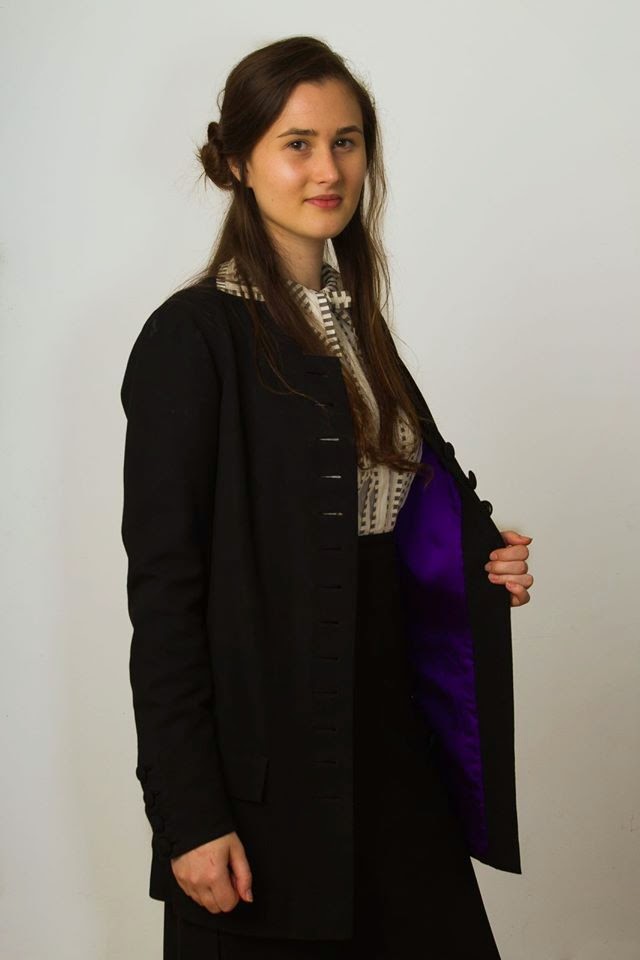 One of the scenes from the "home front" takes place on the beach and we felt that all those dark skirts were just a little too sombre for four rather flighty young women, but most of the budget for the production was, we knew, reserved for providing the soldiers with authentic uniforms and guns (and very effective they proved!) So one person volunteered some material and I volunteered to make skirts. Which was all very well until I dug my sewing machine out and discovered some crucial bits seemed to be missing! Happily the provider of the material also offered use of her machine if necessary. Two of the skirts travelled all the way to Devon with me so that I could bast them together completely to save time machining -- on my return I spent one long sunny afternoon completing all but the hemming stage and another in the depths of the theatre doing some final fittings. Two skirts and three belts down, and only one left to make for the heroine, Isla, and, by this time, about 10 days to opening night! Our costume director had rejected the first length of material for Isla's skirt because she wanted her to have a mauve theme throughout, but I sourced some lovely plum-coloured cotton on eBay which very obligingly turned up within two days. I'd designed a skirt based on the suit I'd loaned for Isla to wear as a widow: 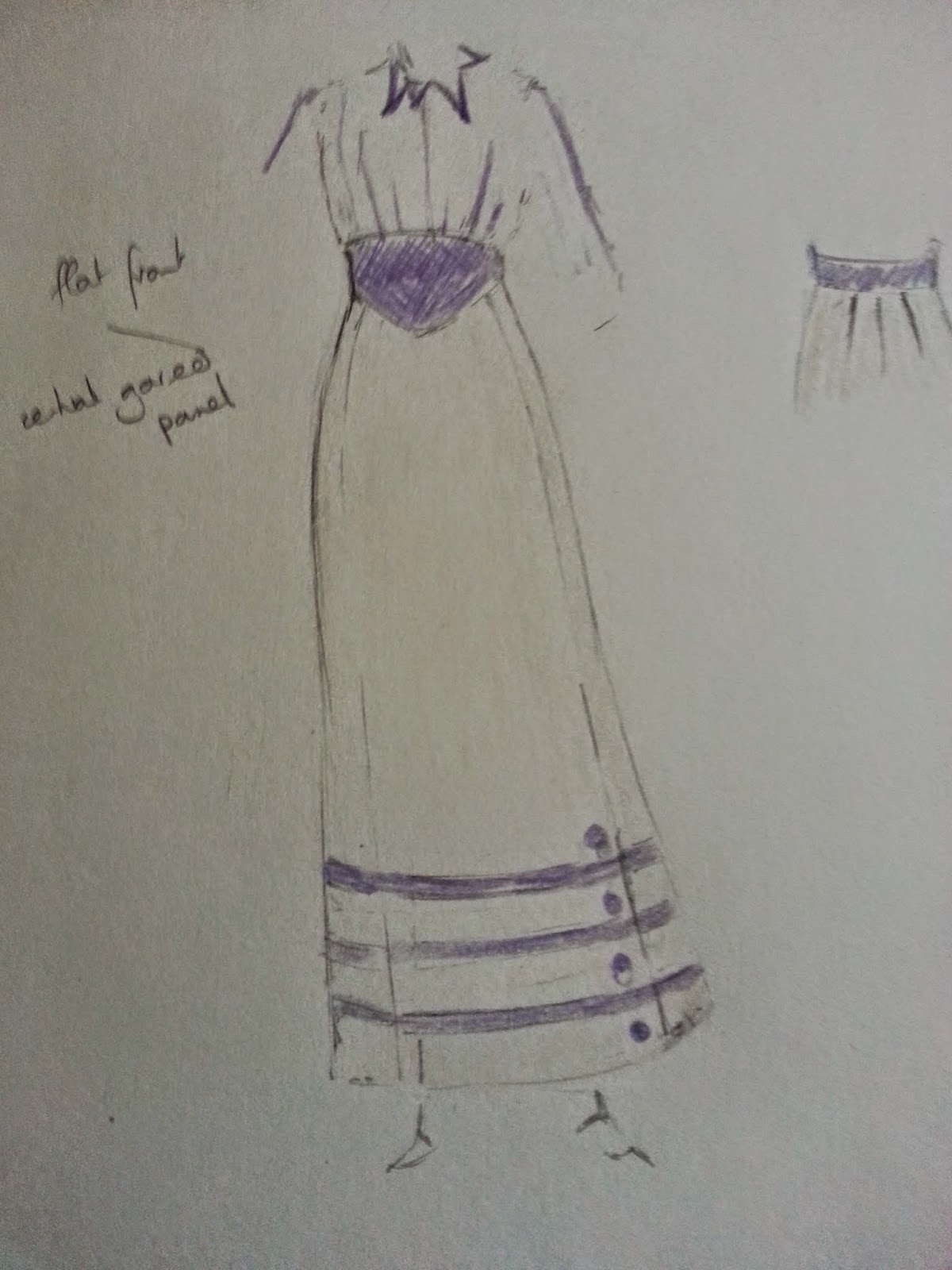 By this time I'd got my own machine working -- to my delight because I'd forgotten how much I enjoy sewing! Isla's skirt was finished over the weekend before the first dress rehearsal,  by which time I'd also remembered how much I enjoy being in theatres, so I'd volunteered to dress at least one performance as well - in the event I did all but the last night, when I watched from out front, which was great because I finally got to see how it all looked. 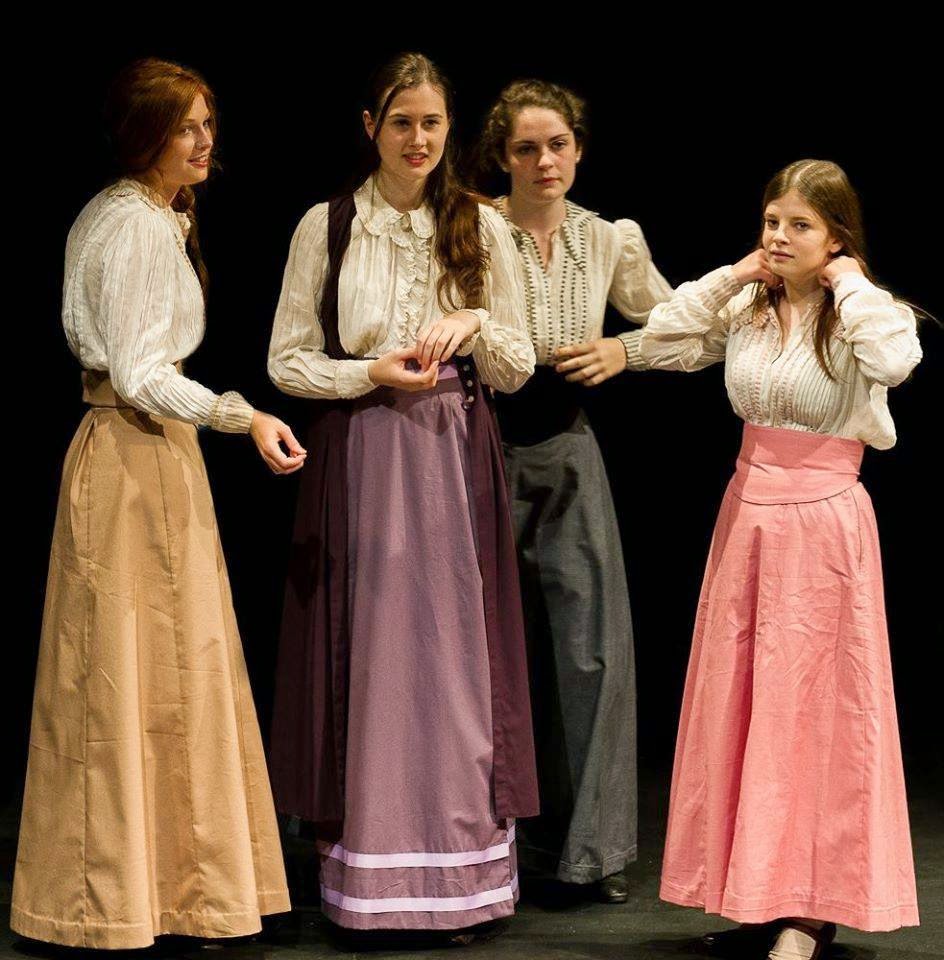 The play itself, by the way, described by its author Robert Wilkinson as a "kind of fable" was wonderful -- at times funny, at others intensely moving. Audience members were heard sobbing, and my son, who played the incompetent, doing-it-by-the-rules captain, reckoned that the sooner he grew his beard back the better (all the soldiers had WWI haircuts). The action was framed by a campaign in the 70s to have the 306 soldiers who were shot for "cowardice" posthumously pardoned, something that actually only happened in 2007. Seeing the young cast in their uniforms really brought home the horror of that time, and the tragedy of those executions of young men, most of them probably suffering from shell-shock, and some of them only 17.
Posted by GeraniumCat at 17:48 7 comments:

Anyone trying to read my blog may have noticed my rather lengthy absence. There are two reasons for this - most recent is the failure of our broadband connection, which has now lasted nearly a month!! I do hope that normal service will resume soon, but I can tell you, it is extremely inconvenient. Though possibly of benefit to local coffee shops.

The other reason is that not only the broadband is broken - I am too :-(

I'm having problems with my hands, which aren't working very well, and lots of things have got rather difficult. Typing not the least of them. Posts for the time being, always supposing we get out connection back, may be rather brief. Not at all sure about getting the hands back, but my robo-glove is quite entertaining.

I did manage a review on the last issue of Shiny New Books, though, and you can find it here, along with lots of terrific reviews by other people.

Looking on the bright side, we had an addition to the family. This is Loki, a 6-month old rescue - wicked, exuberant, affectionate and the plague of both dogs. You'll be seeing plenty more of him,* I'm sure.