I was all set up to get up early on Christmas morning and gladden your hearts with a Christmassy post. However, as I went to bed on Christmas Eve I was conscious of a raspy throat and an irritating cough and I'm afraid much of the last two days passed in something of a blur. An indignant blur, at that - two days in bed and I couldn't read!
Happily for me, by 7pm last night the shivering was replaced by a somewhat hectic warm glow which banished the aches which were making me so miserable, and over the course of the next few hours I demolished Alexander McCall Smith's The Comfort of Saturdays with a mixture of relief and relish. Never mind that the family were eating Peking Goose (yes, really) without me - I could read again.
I'm not sure that I am up to sustained thought on the subject of the book, but I think many of you are familiar with the Isabel Dalhousie novels, and my recommendation is superfluous. Enough to say that Isabel is, as usual, enmeshed in questions of truth and falsehood and in the subtleties of communication between both close friends and partners and our more distant acquaintances. McCall Smith's sly and teasing wit is directed at pretension, at moral dishonesty, and at all the petty foibles that make up the average person (including Isabel who, while not a saint, at least tries hard).
There isn't enough humorous writing about the world of philosophy, in my opinion, but McCall Smith does much to redress that lack; I also enjoy the irritations of Isabel's role as the Editor of the Review of Applied Ethics, a nicely observed theme throughout the series (in this book she composes a quite deliciously malicious letter to a contributor) and can hardly help but envy her new role as the Review's owner. And the scrupulous care with which she conducts her relationships is something we should all emulate.
While these are certainly books which fall quite comfortably within the cosy crime genre, Applied Ethics is very much the mainstay of this series, and anyone seeking dramatic murder is likely to be disappointed (although never fear, Rebus was beavering away in the seedier side of Edinburgh until very recently, though I doubt if he and Isabel met at many parties). Ethical discussion is handled with a considered delicacy and lack of jargon which must surely make it readily accessible, and acceptable to a much wider readership. For lovers of Edinburgh, of course, they are a gift, keeping firmly to the "couthy" parts of the city where a lady of a certain age can safely walk alone.
Posted by Jodie Robson at 13:50 8 comments:

The murder theme continued throughout November, with more Allingham re-reads and a Ngaio Marsh. After a comment on, I think, Life Must Be Filled Up, I was watching to see on what page Alleyn finally turned up in Opening Night: it was page 108. Once he was there he was quite forceful, and it was a good story, I thought, with the young heroine arriving in England from New Zealand penniless because she's been robbed on the ship. Determined not to take advantage of her connections, but to make her way in her own merit, she finds herself forced to take a job as a dresser, but on the opening night of a new play, a murder takes place. The theatrical detail, as always with Marsh, is meticulously done, and made me nostalgic for the days of repertory in provincial theatres: though I only observed them from a child's point of view, it was a world I was thoroughly at home in, and loved. My mother might be persuaded to rediscover Marsh for this one, although she doesn't normally read novels. 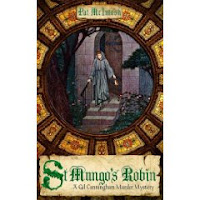 St Mungo's Robin was a new discovery. Not the first in the series, which might have been a disadvantage, but I don't think that was the reason for my disoriented feeling at the beginning; the problem, I believe, was the host of new characters introduced within a very few pages, most of whom had similar names (the inhabitants of a Scottish almshouse, they were all called Maister Something); also the author frequently fails to attribute direct speech for long passages when several people are speaking at once. This very effectively gives the impression of babble, but leaves the reader somewhat adrift at times, because the main characters don't necessarily have distinctive enough voices. Some speech should be distinguishable by different dialect (for instance, one old man is from Aberdeen, and everyone complains that they can't understand him). I had a feeling that non-Scottish readers might find too much of the dialogue incomprehensible – however, McIntosh deals with this well, usually offering the translation of a "new" word within a line or two. The 1493 setting is Dorothy Dunnett territory (that is, the Niccolo series) – McIntosh isn't up to Dunnett's standard in research or plotting, but now that there is no more from that splendid storyteller, McIntosh will more than do. I'm now reading the first in the series, The Harper's Quine, and for those readers who share my love of cosy crime, I urge you to give them a try (the fully-certified Geranium Cat translation service is available to anyone who gets stuck; a "quine", by the way, is a young woman).

Thanks to Bookmooch I have managed to acquire all six of L.M. Montgomery's Anne books, so that I embarked on a real binge, and am nearly ready to write about them for the Second Canadian Book Challenge. Thanks to a chance comment in someone else's blog (I'm sorry, I've forgotten whose), I learnt that there is now a "prequel", written by Canadian author Budge Wilson. Before Green Gables tells the story of Anne's life before she sails into the lives of Marilla and Matthew Cuthbert, and promises to explain how, despite her neglected state, she discovered the world of words and imagination. That should take my score in the challenge from 0 to 7 in one fell swoop!
Posted by Jodie Robson at 18:01 10 comments: 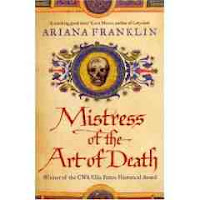 As I said in a previous post, I've been bingeing on murder. Something to do with the time of year, I think - long dark evenings demand dark deeds. The first book that I had been going to write about is The Coffin Trail by Martin Edwards, but Nan has recently reviewed it so beautifully that I don't think there is anything I can add, except to say that I too enjoyed it, and am about to seek out the next in the series. Maybe I'll write about that instead, but I wouldn't be surprised if Nan beats me to it (I think she is better organised than I am!)

Next in my pile of spoils after a recent trip to the library was Mistress of the Art of Death by Ariana Franklin. This is a book I'd seen reviewed a number of times, and thought looked interesting – in fact, I searched the library catalogue for it last year, without success, I recall. And then recently a revelation: this isn't a new writer at all, but another name for Diana Norman, an old favourite. I heard her talk at the Edinburgh Book Festival some years ago, along with another writer I admire, Margaret Elphinstone, and they were very entertaining. So, first of all, I recommend Diana Norman's books to anyone who hasn't read them, they are great fun, whizzing you along at a splendid pace and with great period detail. And second, I couldn't put Mistress of the Art of Death down, reading with bated breath from start to finish and hoping that Adelia Aguilar is not the only character to return in subsequent books.

The setting is Cambridge in the 12th century, during the reign of Henry II – in fact, not long after the horrifying death of the now-canonised Thomas Becket. England has only recently emerged from the shadows of the dreadful civil war in which the supporters of Stephen and Matilda ravaged the country and the feeling that peace is all-too precarious is well conveyed; the Jews of Cambridge are all but besieged in the castle after the death of a local child, and the disappearance of two more. Adelia, a 12th-century forensic pathologist (almost too fashionable a heroine, my dears!) has been sent by the King of Sicily to investigate, the economy of much of Europe being dependent on the financial acumen of the Jews. Adelia, though much given to seeing "the skull beneath the skin", is a caring doctor, and is soon ministering to the poor of the city while she conducts her investigation. Her self-appointed protector, Prior Geoffrey, provides her with several new members of her entourage, including the redoubtable Gyltha and her young son, Ulf. The household shown here reminds me of a recent discussion on the radio (possibly on Melvyn Bragg's In Our Time?) about the ways in which the family has changed over time, since Adelia's servants rapidly achieve family status, a reflection of a time when extended families were the norm and members were not necessarily related.

I've talked before about an author's "feel" for period, and I think Franklin writes effectively about this and, indeed, most periods she turns her attention to. However, she has acquired something of a reputation for good research, and this is a subject where I have slightly ambivalent feelings – on the one hand, I think a good novel is a good novel and accuracy isn't the most important thing in the world, but on the other, I think her research isn't as good as it's cracked up to be. She admits that it's nearly impossible to avoid anachronisms when writing historical novels, and I was happy to make allowances, but only up to a point - please, please, please, Ariana, don't write another description of social dance in 12th-century England.

The final verdict, though, is good fun, good characterisation, and a pretty convincing portrait of Henry II.