Callmemadam blogged yesterday about Girl, the comic she read as a child. This took me through two stages of reminiscence: first, back to the comic I read, Look and Learn, which began in 1962. I hadn't been allowed a regular comic before that - too frivolous - but L&L was educational, and that was considered A Good Thing. I quite enjoyed it, and it introduced me to a lot of famous books in curtailed form. I remember The Scarlet Pimpernel, A Tale of Two Cities, The Hobbit, all of which I went on to read later in unexpurgated form. What I remember most, though (and I was always underwhelmed by the educational stuff, though I'm sure that much has come in useful since for answering questions on QI), was the comic strip The Trigan Empire, which both fascinated and repelled me, and had in spades everything I later didn't like about Star Trek and every space opera since (and before I'm attacked by ardent Trekkies, I watched it for years...)

The second strand of memory, though, was that my younger brothers were the ones who really won on the deal: since I was getting a regular comic, it was only fair that they should too, and Playhour was ordered for them. It's true that we were an eccentric bunch to say the least, but Playhour quickly became weekly reading for the entire family, thanks to the glorious back-page strip, The Travels of Gulliver Guinea Pig. This undoubtedly contained some of the most beautiful artwork ever seen in a children's comic, and I think it later moved to the centre pages as a double spread. 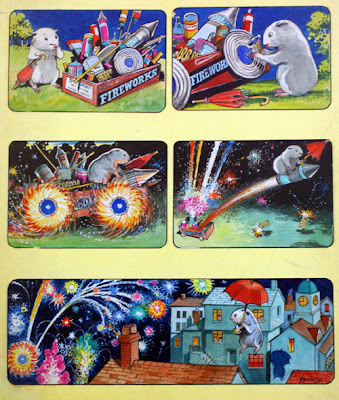 The original artist was Philip Mendoza, and I'm really delighted to find that, thanks to the wonder of the interwebz, I can now look at his lovely paintings again. I can see that my walls are going to be covered with Gulliver prints shortly. When, overnight, the art changed, my parents, brothers and I were so upset that we wrote to Playhour to complain, and received a very nice letter back, saying, I think, that the artist had been taken ill and had to retire, and that they had done their best to find a worthy successor. It's clear now that many people remember the second artist, Gordon Hutchings, with equal affection, and his work was very attractive, but it was a bit more cartoon-y, and lacked the delightful subtlety of Mendoza's. Looking now with a fresh eye, I can see that some of his paintings for Gulliver are very lovely, but it was never again quite the must-read that it had been. Both examples here are of Mendoza's work (I love this train, with its proper windows, and the ashtray you were always told not to fiddle with). 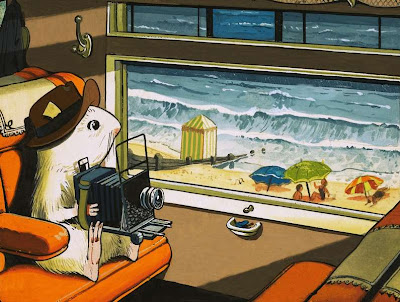 Illustrations from the strip are available as prints from The Book Palace and in various formats from Magnolia Box.
Posted by Jodie Robson at 08:00 2 comments:

Once Upon a Time V 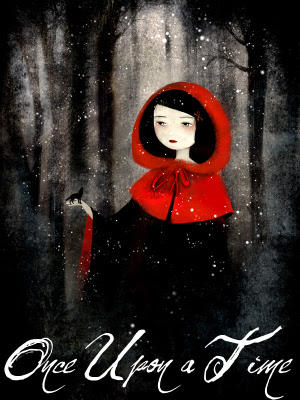 I've been suffering from such acute tunnel vision for the last few weeks that the Once Upon a Time Challenge snuck up without my noticing - I'm so late that 111 people have signed up ahead of me! So my wishlist is going to be rather thrown together, and I haven't really decided whether I'm going to aim for one of each of the sub-genres - fantasy, folklore, fairytale and mythology - or just as many as I can blog about between now and June 21st. I do like to stretch my reading for Carl's challenges if I can, so I'll probably include at least one non-fiction book, and I'll  try to fulfill the requirements for Quest the Third, which includes either reading or watching A Midsummer Night's Dream. Some of my reading will be on my Kindle this year, and some of the possible choices will include titles off last year's list!

Here are my options for this year (it's not exclusive - if you can't indulge a whim in a Once Upon a Time Challenge, when can you?):

Spellwright by Blake Charlton (Kindle) - I like the sound of this, which focuses on the power of words.
Troll Fell by Katherine Langrish (Kindle) - an author I discovered last year, through her fascinating blog, Seven Miles of Steel Thistles, perfect reading in itself for the Challenge. Her book Dark Angels was one of my five best in 2010.
The Poisoned Crown by Amanda Hemingway - this is the final part in a trilogy I enjoyed so much I can't quite bring myself to finish it! Wish she'd write some more.
Verdigris Deep by Frances Hardinge - another I've been saving up, but now there's a sequel to Fly by Night, so that's okay!
The Name of the Wind by Patrick Rothfuss - I see Carl has just reviewed this, and he's pretty enthusiastic about it, which bodes well. Have to buy this one, though.
The Midnight Mayor by Kate Griffin - another new favourite. I took a couple of runs at A Madness of Angels and it proved well worth the effort.
Fantastic Metamorphoses, Other Words by Marina Warner - this was a Christmas present from OH, who knows my obsessions well! This will be the non-fiction choice.

I'd like to read some Diana Wynne Jones for the Challenge, too - maybe The House of Many Ways, which will be new to me. I'm so sad she's gone, I can think of few writers I admire so much. I might also include either one of the Canongate series of retellings of myths (I read Margaret Atwood's Penelopiad for an earlier Challenge) or one of the recent re-tellings of stories from the Mabinogion, when I remember who publishes them! And, of course, there will be impulse reads, triggered by reviews from other people in the Challenge, which is one of the pleasures of taking part.

Email ThisBlogThis!Share to TwitterShare to FacebookShare to Pinterest
Labels: Once Upon a Time V Challenge

Warning: this does contain plot spoilers, for which I won’t apologise, since I talk about the novel in relation to the author’s own life.

Ankle Deep was a first novel, and not one of her Barsetshire series (it followed her memoir of her early childhood, Three Houses). It’s a clearly autobiographical story of a young woman trapped in a marriage which isn’t on the surface particularly unhappy, but leaves Aurea deeply unsatisfied. Her new friend Fanny, frivolous, manipulative, and married to Aurea’s first love, decides that a mild flirtation is just what both Aurea and Fanny’s husband Arthur need to while away the period of Aurea’s visit from Canada, leaving Fanny free to continue her own harmless flirtation with their friend, Valentine Ensor. Of course, Valentine and Aurea fall painfully in love; in the end, only the rather wet Aurea is damaged, as Valentine is far too shallow to suffer greatly. I spent much of it wanting to give Aurea a good shake and to lock Fanny up where she couldn’t do any more harm.

I found it interesting that Aurea is a self-portrait, since Thirkell’s other alter ego is Mrs Morland in the Barsetshire novels, and you couldn’t have anyone more unlike Aurea. Mrs Morland is clearly Thirkell as she would like to be, but Aurea is much more surprising. Ankle Deep was written hard upon the break-up of Thirkell’s marriage, and acknowledged as autobiographical by both the author herself and her closest friends, but it’s not especially flattering; it’s interesting that the working title of the book was "Three Sillies". Aurea, although married, is naïve and inexperienced, and her refusal to embark on an actual affair serves to emphasise these qualities. And the close identification of Angela with Aurea, lends veracity to the characterisation. However, if Valentine Ensor depicts a real person that Thirkell fell in love with while she was home from Australia on a visit, she chose a wise course in not succumbing to temptation. Not that he’s a seducer and a cad, or anything, just that he’s weak and self-centred, and the charm would soon wear off. But then, after two failed marriages, Thirkell just might have started to learn about such men.

According to Thirkell’s biographer, Margot Strickland, in the senior Howards Thirkell paints a recognisable picture of her own parents, and apparently suffered some trepidation before publication. In many ways I think they are the best of Ankle Deep, affectionately portrayed in both their strengths and foibles, and a clear indicator of Thirkell’s potential as a novelist; elements of both recur in the Barsetshire novels, where she honed the gently irritating ways of Mr Howard is something much sharper and funnier. In the same year (1933), she published the first of the Barsetshire books, High Rising, and then she settled down, like Mrs Morland, to writing “the same book every year” until her old age.
Posted by Jodie Robson at 17:24 No comments: