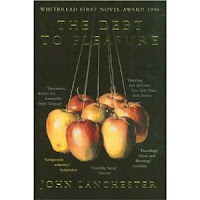 Today's post on Cat Musings is inspired by my reading for the Cornflower Book Group in the last week (discussion here), John Lanchester's The Debt to Pleasure. Despite its nasty, arrogant narrator, I enjoyed this book and was amused by the conceit that, if people are going to read cookery books like novels, then someone should write a novel that's like a cookery book. I know that others have done this - I'm very sniffy about Chocolat, I'm afraid, and don't have any immediate plans to read it (I always hate books that everyone else raves about), but Cooking with Fernet Branca has just edged its way up the TBR pile. Lanchester (in the person of Tarquin) holds up well as a food writer, with that note of greediness combined with a lofty conviction of his own infallibility in matters of taste that can be characteristic of the genre. The writing is authoritative in another sense too, that of an author manipulating his tools with incisiveness and, to borrow Cornflower's word, brio.

Meanwhile, with deadlines to meet, I'm re-reading my way right through the Mountjoy novels by Elizabeth Pewsey. Most of her characters are enthusiastic about food, which is one of the reasons why I enjoy the series - lots of shopping at Gumbles, the upmarket deli in Eyot (aka Durham) - and many are musicians (one Amazon reviewer grumbled that they are all named like characters from a recherché opera, which is true, but I don't mind it at all - my favourite is Canon Holigost, while a composer should be named Alban Praetorius). Reading them one after another makes me a little more aware of their failings - there's not enough variation in voice, for example, nearly everyone talks in the same way and uses the same rather idiosyncratic set of expressions (for instance, "sharpen your wits", which I've never heard anyone actually say). On the other hand, if you can ignore - or as I do, enjoy, the mannerisms - then it's a rewarding series, full of fun and acerbic wit, with a nice sense of the traditions that matter. I'll write about them some more when I have time - meanwhile, it's back to work.
Posted by Jodie Robson at 16:32 4 comments:

The Secret Ministry of Frost 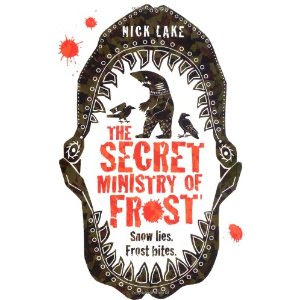 Gordon Fitzwilliam has mysteriously disappeared in the Arctic, and his daughter Light, along with their servant Butler, is attending his funeral - with empty coffin - on ths shores of Lough Neagh in Northern Ireland. Thus begins The Secret Ministry of Frost, the intriguing story of Light's quest to find her missing father, following in the steps of the lost Franklin expedition of 1845. Fitzwilliam, curious to know why so many men on that expedition seems to have disappeared without trace, has fallen foul of the aeons-old creature known as Frost, a monster so fearful that even the Inuit won't talk about it.

Light has had an unconventional upbringing: shunned at the local school because she is the albino daughter of an Inuit mother who died on an earlier trip to the Arctic, home-educated by her explorer father and Butler, she is brave and resourceful, and when her home is invaded by murderous slit-eyed killers - isserkiat - she and Butler purchase an ice-breaker and set sail for Nunavut, where she will encounter gods and monsters, and discover the truth of her birth. Despite her Inuit heritage, she is utterly unfamiliar with the physical demands of the Arctic, which tax her strength and courage, and she must also face even the even greater challenge of a shamanistic journey in order to save the world from the ravages of Frost.

Light's enemies are truly terrifying, and Nick Lake makes few concessions to his YA target audience - this is a violent, gory, can't-put-it-down sort of read. I have a few minor niggles - "Inuits" as a plural irritated me (although a quick Google seems to suggest some legitimacy), and it may be that Canadian readers may find some that I have missed. Also, my occasional contact over the years with Canada's First Peoples gives me some slight qualms about cultural appropriation - not a discussion I plan to embark on here, beyond noting that it can be a  contentious issue - but taken on its own terms, this is an pacy adventure story with a nod to colonial history, in the form of the Franklin expedition, with the extra attraction of its venture into the harsh yet beguiling world of Inuit mythology. There is beauty here as well as terror.

On a personal note, I am counting this as a contribution towards both the Canadian Book Challenge - well, it is about Canada - and Once Upon a Time IV: I'd rather expected my reading for the latter to have its usual European slant, and I'm delighted to have found something so different to recommend (I shall be buying copies for my favourite people, you can be sure). The cover, by the way, is lovely - you can't tell from the picture here, but it sparkles all over with snowflakes. The splendidly atmospheric title, by the way, comes from Coleridge's poem Frost at Midnight.
Posted by Jodie Robson at 18:08 13 comments: