Time for a quick round-up of recent reading, while I get myself organised for a proper post.

Cocaine Blues by Kerry Greenwood: The first of the Phryne Fisher series, set in 20s Australia, which is rather refreshing. The heroine is a wealthy young member of the British aristocracy who nevertheless had poor beginnings, so she's managed to acquire lots of street-smarts. The trouble is, she is also too smart for the sort of suitors her family want her to marry, so they are quite relieved when she takes herself off to Australia where she's been asked to investigate whether all is well in the marriage of another young lady. She quickly acquires a couple of sidekicks and finds herself enmeshed in all sorts of skulduggery involving bathhouses and ballet dancers. Fun.

A Boy Called M.O.U.S.E by Penny Dolan: An atmospheric Victorian mystery about the young heir to a fortune whose uncle wants him out of the way (another one! I seem to be picking them at the moment.) Mouse is living happily on a farm with the woman he thinks is his "Ma" when the creepy Mr Button turns up and he is suddenly sent away to a school which could easily be Dotheboys Hall. The headmaster calls him Vermin and sends him to work in the kitchen. Eventually, Mouse escapes and set off to look for his Ma, a journey which takes him into the world of Victorian theatre. Mr Button, though, and wicked Uncle Scrope are on his trail. A charming and captivating book for young readers, full of wonderfully Dickensian characters.

The Beautiful Mystery by Louise Penny: An Inspector Gamache novel is always a pleasure. This has a particularly appealing setting -- a mysterious monastery in the wilds of Quebec, where a murder has taken place. Gamache investigates with his usual thoughtfulness and care, but Beauvoir is troubled by events in his own recent past. This is how I imagined the monastery, except in more isolated surroundings: 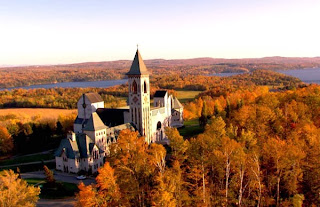 Belinda Goes to Bath by M.C. Beaton: amiable fluff, this one, and the second in a series about Miss Hannah Pym, a Regency-period housekeeper who has been left enough money to keep her in reasonable comfort for life. Hannah has an irrepressible sense of adventure, and decides to use the money to go travelling. Her first trip (and the first book) takes her to Exeter; in this one she refuses to be daunted by winter weather and sets off for Bath. On the way, the stagecoach is overturned in a snowstorm. Fortunately the grim but dashing Marquis of Fenton is at hand... what makes these fun is that Hannah is sensible, bossy, organised, and if she sees a charming young lady in a dreadful plight, you can be sure that she'll take charge. Happily, the charming young ladies have plenty of character too!

Bryant and May and the Invisible Code by Christopher Fowler: I was a tiny bit adrift here, because this is quite a late episode in the very splendid Bryant and May series and I've missed an awful lot. It was also ages since I've read one, and I'm slightly vague about some of the details. Arthur Bryant is a policeman who ought to have retired years ago, but is now a member of the Peculiar Crimes Unit, assisted by John May. This one involves a woman who thinks that there are witches after her; there are secret codes to be broken, rumours of nefarious goings-on at Porton Down, and curses. This series is tremendous fun.

Real Murders by Charlaine Harris: Another first in a series. Charlaine Harris is the author of the Sookie Stackhouse books (that became True Blood on TV), but she also writes more conventional cosy crime, set in small-town America. Aurora Teagarden (Roe) is a librarian, and a member of a club called Real Murders, a group of crime buffs who research and discuss historical crimes. When she finds a body it is quickly apparent that not only is the killer staging past murders, but must also be a club member -- and a very cold-blooded and ruthless one at that. Roe doesn't exactly rush into investigating the murders, but she is curious... I may have to start a star rating for books I only want to talk about briefly. This would be a good three stars (out of five).