The Country House by John Galsworthy 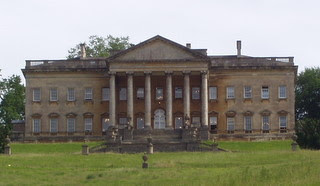 I was interested to read something by Galsworthy that wasn’t part of The Forsyte Saga, which I am also reading, so that I had a comparison.

I can’t exactly say that The Country House has been an enjoyable read, because it – intentionally, I hasten to add - made me angry, but it has been interesting. Although not part of The Forsyte Saga, it shares one of the themes of the first book of the saga, Man of Property, in that it is about a divorce. Here, it is the main focus of the book and the legal ramifications of divorce, and its effect upon the three people most closely involved, and their wider family circle, is anatomised.

The country house of the title is inhabited Mr Horace Pendyce, with his wife Margery and their two youngest children. The eldest son, George, lives in London, where he divides his time between his Club and his racehorse; his father considers that he should be a home, learning to manage the estate, but George’s attentions are fixed on Mrs Jasper Bellew, a woman of great beauty with an alcoholic husband. Helen Bellew is a distant cousin of Mrs Pendyce, and is the ward of another cousin, Gregory Vigil.

The book begins with a shooting party given by Mr Pendyce, and the arrival of his guests. Mr Pendyce himself is originally of yeoman stock, his family having married into money and, we are given to understand, his wife is rather better bred than he is. He is an old-fashioned landlord: “It was his individual conviction that individualism had ruined England, and he had set himself deliberately to eradicate this vice from the character of his tenants.” To entertain their guests Mrs Pendyce gives a dance, and it is at this event that the vicar, the Reverend Hussell Barter, sees George kissing Mrs Bellew in the conservatory.

This is 1891, and Mr Barter immediately decides Mrs Bellew is no better than she ought to be, “no more than a common baggage”. So when some time later Vigil suggests that she should divorce her husband, from whom she has been living separately, Mr Barter officiously decides that it is his duty to intervene, on the grounds that Jasper Bellew is one of his parishioners. Helen finds herself being served with divorce papers, with George cited as co-respondent; however, if George will promise never to see Helen again, proceedings will end. George immediately announces that he will deny there has been anything between them, so that the divorce may proceed; the expectation of his family is that, if it does, George and Helen will marry. From this point, the complacent security of the Pendyces is shattered. Horace announces he will have nothing more to do with his son, and cannot bear the though that “that woman” should ever live in his house. Margery, the perfect wife, who has nonetheless never really loved her husband, leaves him to go to London and support her son through the ordeal.

What made me angry while reading this book, perhaps not surprisingly, is the reminder of the injustices perpetrated by our divorce laws until comparatively recently. Helen, who wants a divorce, must dissemble, her lawyer tells Vigil:

“We shall want evidence of certain things. Have you got any evidence?”
Gregory ran his hand through his hair.
“I don’t think there’ll be any difficulty,” he said. “Bellew agrees – they both agree.”[…]
Mr Paramor drew his breath between his teeth.
“Did you ever,” he said drily, “hear of what’s called collusion?” [. . .]
“Two unhappy persons must not seem to agree to be parted,” he said. “One must be believed to desire to keep hold of the other, and must pose as an injured person. There must be evidence of misconduct, and in this case of cruelty or of desertion. The evidence must be impartial. This is the law.”

So Helen, who is desperately unhappy with her husband, cannot seek a divorce unless she is able to demonstrate that she is the injured party (and there is a reason, which reflects well on her, why she cannot), but her husband, citing George, can start proceedings.

I can’t imagine very many people reading The Country House unless they have a particular interest in the period. It is, of course, well written (Galsworthy won the Nobel prize for Literature in 1932), but it lacks some of the beauty of structure evident in the Saga, although it was published a year later than Man of Property. In fact, I find myself wondering if he felt he had glossed over the miseries of divorce in that, and wanted to present a different viewpoint. If so, he succeeds, both in presenting the hypocrisies of the law, while also drawing a picture of three very different marriages. The novel’s characterisation is good, particularly in displaying the pomposity and inflexibility of Horace Pendyce and the loathsomely self-righteous vicar. Even so, while exposing their faults, he allows some humanity and vulnerability to creep in from time to time, as when the vicar’s wife is giving birth to their eleventh child. I have to admit to nearly giving up quite early on when a (condemnatory) comment on hunting made me wince sharply, and wonder if casual brutality towards animals might be a feature of the book. The carelessness of Pendyce’s love for his dog – and his wife – does indeed emerge: he continually trips over or treads on his poor spaniel, who is unswerving in his love for his master. The pace, just a little slow at first with the introduction of the dramatis personae, picks up, and offers a rewarding read.

Cross posted from Outmoded Authors.
Posted by Jodie Robson at 17:59