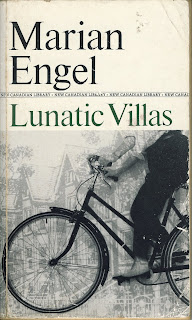 In a recent review of The Honeyman Festival by Marian Engel, I wrote that Lunatic Villas is a joyous book. And, after a re-read, and despite its detailing of vicissitudes of the death-and-taxes variety, I still find it so. Harriet, harassed mother and collector of innumerable children, is Engel's most indomitable heroine. After the death of her first love, Tom, a Vietnam draft dodger, she adopts three children: Simeon, the son of his ex-girlfriend and his own two daughter, Melanie and Ainslie, to grow up beside Harriet and Tom's own son, Mickle. An unfortunate marriage brings twins Peter and Patsy, children of inveterate sponger and wastrel, Michael Littlemore, while Harriet's disturbed niece Sidonia joins the family when her mother is unable to cope with her. Harriet supports her disparate brood by writing a magazine column under the byline "Depressed Housewife". Into this menagerie comes Mrs Adeline Saxe, an unexpected English visitor who is the distant cousin of someone Harriet once stayed with in England.

Lunatic Villas is a cul de sac in Toronto, inhabited by a community of neighbours who all know each other, and thus until now almost an island in the city, but soon to be integrated with the demolition of the factory at the end of the street. The inhabitants are in and out of each other's houses and know each other's business, although this doesn't preclude tensions and disputes, and occasional surprises, such as when Harriet's friend Roger's ex-partner presents Roger with their baby to bring up. Much of Harriet's past (and her present anxieties) emerges as it is explained to Mrs Saxe, while children are ushered out after breakfast: Sidonia to her psychiatrist, Mick to his speech therapist, the Littlemores to be taken by their father to the dentist (in fact, to McDonalds); only Simeon, seriously studying for university, Melanie, who is sensible, and Ainslie (who is absent visiting rich maternal grandparents) are not a constant source of worry. Constant demands are also made on Harriet by her two older sisters, Madge, eccentric and tyrannical (and very keen on proper leather shoes) and Babs, an alcoholic with money difficulties because Madge controls the family money.

Yet, throughout this book there is a sense of hope, and much to amuse. The eldest son, Simeon, is a warm and likeable character, Mrs Saxe is endearingly eccentric in her evident amusement at family events, and her obsession with bicycles – shared by Mick, which gives him common ground with someone at last – and, while there is betrayal amongst the family, there is also love, affection and a degree of reconciliation. Engel's delicious sense of humour shines through the story, the writing has an easy flow and engages at once. If the events might seem at times bizarre to the childless, every parent knows that the weird and ridiculous are part and parcel of the process of bringing up children and, the more you have, the truer that will be. I warmly commend this entertaining book to readers of Outmoded Authors and, because if you haven't you should certainly read it, to all those partaking in the Canadian Reading Challenge.