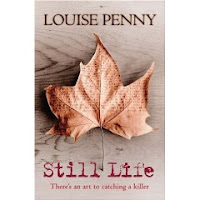 There's an added dimension to a crime novel when it has a real sense of place - here in the UK, Ian Rankin does well it for Edinburgh and, of course, Morse is Oxford - so I was immediately tempted by a series set in rural Quebec. This province puts in a guest appearance in Kathy Reichs' series about forensic anthropologist Temperance Brennan but to me it always seemed that Reichs is much more interested in how it feels to stand up to your ankles in gore, than in where a crime occurs. Not so Louise Penny, whose evocation of the village of Three Pines* is convincing in all its details, with a fine feel for the pettiness and local politics which will be familiar to anyone who has lived in such a community.

Still Life starts with the death of Jane Neal, retired school teacher and universally popular local character. The only odd thing about Jane is that she has never invited any of her friends beyond her mudroom (I like this term – we have one of those, albeit unofficially!), but they are all prepared to forgive this eccentricity. It looks like an accident – the murder weapon is an old-fashioned hunting bow – and the police are cautiously disposed to treat it as such. And this is where the real strength of the book lies, because Penny has created a homicide squad of real characters, people you just know are going to grow in complexity as the series continues. Chief Inspector Armand Gamache is a gentle, thoughtful man, a team leader whose style is quiet observation, while his colleague Jean Guy Beauvoir presents an efficient and unruffled front to the world. Rookie team member Yvette Nichol is all prickly edges and defensiveness, an aggressive and unattractive young woman, but we know that some of the problem is her uncertainty, and that, with the right guidance, she could turn into a valuable member of the squad. Whether she will is another matter. The villagers, too, are fleshed out characters, people you quickly come to care about, and the writing is measured and thoughtful.

This is a first novel and, as such, it isn’t perfect. A second reading persuaded me that what I thought were loose ends in the depiction of the murderer could be justified, though a slight clumsiness remains. However, the modus operandi of both murderer and police are explained with clarity often missing in novels by more experienced writers, and I am excited at the prospect of reading more by this author, and especially by renewing my acquaintance with Inspector Gamache, who may, in time, come to stand beside Maigret in the ranks of great detectives. I can just see him played on British television played by Michael Gambon, who played Maigret memorably; I hasten to add, though, that I am sure he might be played equally memorably by a Québécois actor, it’s just we might be less likely to see it here! Since Branagh has taken to our screens in Wallander, perhaps the wonderful Robert Lepage would like to play Gamache?

I read this for John's Second Canadian Book Challenge - the first of my thirteen that I've managed to post about, though I have actually read nine books!

*Edited later because I had a brainstorm and wrote Trois Rivières rather than Three Pines - bizarre!
Posted by Jodie Robson at 19:33