The Second Canadian Book Challenge finishes on Canada Day, and there are still two books I haven’t reviewed for this challenge; this is partly a reflection on my feelings about them but, for the sake of completeness, I shall sum up my impressions here. 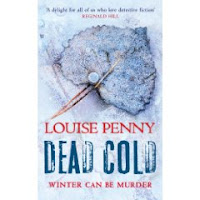 Dead Cold by Louise Penny was the second book about Inspector Gamache. I talked enthusiastically about the first, Still Life, earlier in the year, taking pleasure in its sense of place and characterisation. I enjoyed the second less, feeling that it suffered slightly from leaving a too much unresolved in order to set up subsequent books in the series, leaving me with the sensation of being cheated, rather that of eager anticipation. Penny is a new writer, and there’s a lack of balance here between open-endedness and the closure necessary to each episode in a series. The story itself moves along at a good pace, reintroducing all the favourite characters first encountered in Still Life, and Gamache himself develops nicely, though I thought his wife helping out with his unsolved cases smacked more of plot device than reality. The victim is a really unpleasant individual, and I think more subtlety is needed -– Penny likes to paint portraits of horrible people, but she does it with rather a heavy hand. I shall read the next one, but the community I enjoyed so much in the first is beginning to feel a little claustrophobic.

A Boy of Good Breeding by Miriam Toews was also a slight disappointment. As I read, I found myself comparing it with one of last year’s choices, Steve Zipp’s Yellowknife; to me, as a British reader, they have a similar sense of expansiveness and open space which contrasts with the more enclosed space of small communities, but for reasons I can’t quite define I preferred the less well-known Yellowknife. They share a quirky sense of humour and, if Toews doesn’t quite go down Zipp’s magic realist route, there are nods in that direction. She has a lightness of touch as a writer and I can see the quality there, but it doesn’t quite work for me. I couldn’t engage with any of the characters, and I found myself rushing the end. I’m interested to see that some of the other reviewers who talked about Toews’ books seemed to have similar reactions. I think I'd like to try The Flying Troutmans, though.

This completes the second challenge, and I did indeed only read books by women. I didn’t manage to finish the first, only reviewing 7 books for it, but that’s 20 Canadian books in two years, and I went to hear Margaret Atwood speak at the Edinburgh Book Festival last August. I shall certainly be taking part of the third challenge and will post about the choice of books soon!