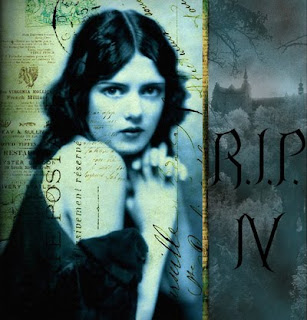 The days are getting cooler, the nights are drawing in and oh, goody! It’s time for R.eaders I.mbibing P.eril again, absolutely my favourite challenge of the year. Oh wait, I said that about the Once Upon a Time Challenge – oh what the hell, I just love Carl’s challenges. This year the banners are really lovely, too.

Now - to the reading pool (I love this bit): first of all, I am determined to join in with the Short Stories Peril again, to which end I have just demanded that my son hand over my copy of John Buchan’s Supernatural Tales, which he has had for ages. Years ago I read Buchan’s Witch Wood, and it was deliciously spooky – in fact, I “inherited” the library copy of it, because I left it beside the bed one night, and the puppy chewed it. There are fifteen stories, which I think should see me through!

As usual, I shall be over-ambitious and go for Peril the First, four books of any of the following subgenres: Mystery; Suspense; Thriller; Dark Fantasy; Gothic; Horror; Supernatural. Last year I wanted to read Neil Gaiman’s The Graveyard Book, as everyone else was doing, but my copy didn’t arrive until after the challenge had finished, since when it’s been on the TBR pile. I thought about starting it during OUT3, but secretly I wanted to save it for the autumn, so this year it’s back on the pile with the definite intention of reading it. I decided, too, that Ian Rankin’s Rebus series counts as dark – some of the television series (with John Hannah as Rebus) is being re-shown at the moment and you would think Edinburgh never actually sees daylight! To celebrate RIP IV I started A Question of Blood last night and read for much longer than I meant to.

So, that’s my first three chosen. I read a review of Agatha Christie’s supernatural stories at BooksPlease, so I’ve added that to the list, and I have The Children’s Book on order with the library – for those who don’t know, it’s about a teller of stories and, from what I can gather, quite dark enough to be included here. The rest of the reading pool will offer some choice for those last-minute changes of mind. As Carl says, it’s more fun with a list to choose from.