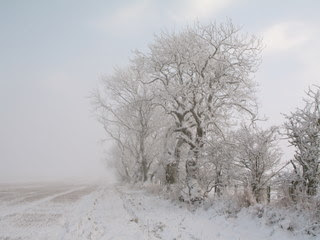 From Christmas Pudding by Nancy Mitford

Lady Bobbin was always most particular that the feast of Christmas should be kept by herself, her family and her dependents at Compton Bobbin, in what she was pleased to call "good old-fashioned style". In her mind, always a rather muddled organ, this entailed a fusion of the Christmas customs brought to his adopted country by the late Prince Consort with those which have been invented by the modern Roman Catholic school of Sussex Humorists in a desperate attempt to revive what they suppose to have been the merrieness of England as it was before she came to be ruled by sour Protestants. And this was odd, because Germans and Roman Catholics were usually regarded by Lady Bobbin with wild abhorrence. Nothing, however, could deter her from being an ardent and convinced Merrie Englander. The maypole on the village green, or more usually, on account of pouring rain, in the village hall; nocturnal expeditions to the local Druid stones to see the sun rise over the Altar Stone, a feat which it was seldom obliging enough to perform; masques in the summer, madrigals in the winter and Morris Dances all the year round were organized and led by Lady Bobbin with an energy which might well have been devoted to some better cause. ...

[E]very year at Compton Bobbin the German and Sussex customs were made to play their appointed parts. Thus the Christmas Tree, Christmas stockings and other activities of Santa Claus, and the exchange through the post of endless cards and calendars (German); the mistletoe and holly decorations, the turkeys, the boar's head, and the succession of carol singers and mummers (Sussex Roman Catholic); and the unlimited opportunity to over-eat on every sort of unwholesome food washed down with honest beer, which forms the groundwork for both schools of thought, combined to provide the ingredients of Lady Bobbin's Christmas Pudding.

Is there anything as delicious as Mitford? Christmas Day at Compton Bobbin is unrelentingly gruesome, the weather failing to live up to its allotted role by being wet and foggy, though the festive meal is enlivened by an apparent bomb threat. This is a witty froth of a book, one of her earliest, with a slender, though wholly satisfying, plot and a cast of amusing and endearing characters. One for winter reading - in front of the fire, if possible! 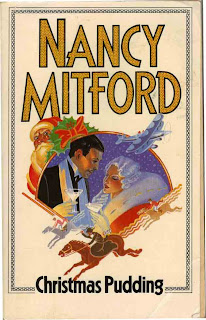