The Serpent Pool by Martin Edwards 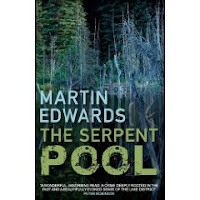 Martin Edwards is tremendous at writing witnesses/suspects so insolent that even the reader wants all policing rules forgotten so that a beefy sergeant can do them over in a secluded cell. By the end of his books you’re not so much trying to eliminate suspects you like as find reasons to arrest the lot of them. Bring back hanging! I shout, ignoring the fact that my pleasure in a good whodunnit is, like Lord Peter Wimsey’s, usually ever-so-slightly marred by the knowledge that the perpetrator will hang (I think perhaps Lord Peter felt it a little more keenly than I, but I am prone to brooding).

In The Serpent Pool, the latest in the excellent series featuring historian Daniel Kind and DCI Hannah Scarlett, a book collector is found burnt to death along with his library. This allows Edwards plenty of opportunity for musing on the pleasures of books, a subject which he knows is dear to many of his readers, while providing those readers with the chance to feel superior to his characters because we are much more discerning and have, of course, read all of the books in our collections (haven't we?). There’s a nice shudder of horror at the thought of all that wanton destruction - not of the victim but the library. The burning of even imaginary books is anathema to the bibliophile.

Our ‘official’ detective Hannah is investigating another of her cold cases – this time of a young woman found bound and drowned in the Serpent Pool, coincidentally within walking distance of the new home purchased with her bookseller boyfriend, Marc. We’ve known from previous books that Marc has few redeeming qualities, so we’re not at all surprised to find that he knows both victims, nor that he fails to tell Hannah about his acquaintance with the drowned woman. In fact, despite the new house Hannah and Marc are barely rubbing along together, with Hannah recognising that it might just be reluctance to make a break that keeps them together. Whenever she thinks of this she suppresses it pretty firmly, so that you feel it will take a real shock to break them up.
Daniel, meanwhile, has decided to write a book on Thomas de Quincy, who has, of course, credentials as a Lakeland writer. He’s having trouble getting down to it, not least because he is being distracted by a visit from his sister Louise. She’s a bit of a flake, really, though we wouldn’t admit it to Daniel, who is very loyal to her, always making allowances for her because she was hurt by the defection of their policeman father. Louise has been spending Christmas with Stuart Wagg, another local book collector and a perfectly ghastly man. She's not awfully good at choosing men, either.
Apart from Marc, Hannah has another thorn in her flesh, in the shape of a new sergeant in her team. Greg Wharf is brash and blustering, full of himself and unpleasantly prone to insinuating remarks. Furthermore, the whole squad is afflicted by a bug that is doing the rounds, and consequently short-handed, so yet another murder is a burden they could do without, especially when it begins to look as though there might be links between the recent deaths and Hannah’s cold case.
A digression here - I used to live on the edge of the Lake District and I don’t remember that it was populated entirely by horrible people! It seems to have become as dangerous as Midsomer! Of course, a high body count always seems to follow when a gifted amateur sleuth moves into a small community, but if I were Daniel I’d be starting to wonder why I never met any nice neighbours. More seriously, I think Martin Edwards catches the atmosphere of living in small communities well:  that knowledge that if you so much as sneeze someone will be talking about it and probably not too kindly. It’s a terrible admission, I know, but I used to find the Lakes a little claustrophobic (actually in terms of its physical scale - it seemed very small after the Highlands) and I rediscover that sense of constriction whenever I read this series: no wonder they are all crazy about striding across the fells or venturing up all those jagged hills, they have to in order to be able to breathe! No, I’m not just showing my prejudices here, honestly - I enjoy the way that Edwards evokes the landscape and spirit of the Lakes. If perhaps he evokes less of the spirit of its people, that is because many of his characters are incomers. Like every desirable part of the country, the Lakes attract people who want to settle there, just as Daniel has done, but they are not all as benign, and Edwards has shown himself good at depicting people who’ve made their money in the cities and then move into rural communities where they buy up the houses and then shut themselves behind security gates.
A real nail-biter of a denouement will keep fans of Martin’s books very happy – the tension really builds in the second half. Definitely one to save for a weekend, or an indulgent day off. With a good fire and a nice cup of tea to ward off that chilly Lakeland fog I can promise you will be in for a good read.
Posted by Jodie Robson at 17:50