The Find by Kathy Page 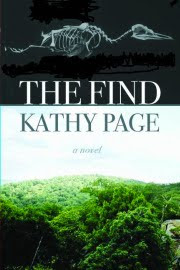 Two people from very different backgrounds, Scott and Anna, come together unexpectedly. Scott works in the hotel in the community where he has grown up – although he wishes for a change in his life, he sees no prospect of it; Anna is a palaeontologist, about to embark on a dig to excavate a fossil pterosaur. In a chance meeting, though, they seem drawn to each other – perhaps because they recognise each other’s history of family problems – and Anna tells Scott her secret fear, that she will succumb to the hereditary Huntingdon’s Disease that killed her father. A bond established between them, Anna invites Scott to work as a volunteer on the dig, essentially to be her personal assistant in case she shows any symptoms of the disease. Scott, desperate to get away from his alcoholic father without actually deserting him, seizes an opportunity to get him into a rehab home, and embarks on his new role despite his lack of confidence. Most of the other workers on the dig accept him in a friendly fashion, though there are tensions because the excavation has been divided into two sections to accommodate, Mike Swenson, an ex-colleague of Anna’s. This division is a cause of conflict first between Anna and Mike, then the two teams and eventually between the scientists and protestors from the local First Nations band, the St’alkwextsihn – this is land which is the subject of treaty negotiations. Scott’s own allegiances are divided since his mother was a band member and he has grown up with the protestors, but as the protegé of the scientists he can also see the value of their work. Mike wants simply to over-ride the protest, but Anna is anxious to find a compromise.

Much of the story turns on patterns of things not easily seen – the traces in the shale which may indicate the presence of the pterosaur, the patterns of deterioration and the gene markers which may demonstrate that Anna has the disease: patterns of small things which once discerned, point to a larger whole. There are, too, patterns of family history, and the patterns of conflict played out between First Nations and colonisers, and even, at a mundane level, between men and women. A crucial theme is of the integral nature of the land, its inhabitants and its stories – to local band members, the removal of the fossil to a distant museum is a rape not only of the land but also of their culture: “Museums are where they put the remains of what has been overrun,” says one of them. The pterosaur is a bird ancestor, and part of the land. This theme is one that has had to be addressed in Canada, where Indigenous Peoples now form part of the consultation process for museum curation and it is familiar to see notices on exhibits to the effect that all or part of the display is unavailable because it is in use. The removal of human remains is even more contentious, of course, and there has been another case in the news recently of remains being returned to their place of origin for burial.

The Find is a thoughtful book, handling its difficult issues with tact and sensitivity. I felt that it was perhaps a little overlong – the period after the dig becomes somewhat episodic, and I thought might have benefited from some more judicious editing, but the chapters covering the excavation itself were really gripping. A book more about ideas than events, with sympathetic characterisation which uses two difficult issues to illuminate each other.

This was a read for the Canadian Book Challenge.
Posted by Jodie Robson at 16:12