The Hanging Wood by Martin Edwards 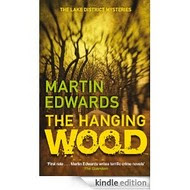 A new Martin Edwards  book is a pleasure to be anticipated keenly, and The Hanging Wood doesn't disappoint. Mind you, I think Martin is setting up himself up as a contender for the "creative rural deaths" award, held until now, of course, by the ridiculously OTT Midsomer Murders TV series, which rarely looks at the harsh realities of country life when camp will do. This series, however, is set in the Lake District, which may look picturesque to  visitors but is inhabited by a local population who are no strangers to the struggle of farming on marginal land and its concomitant high suicide rate (I've often thought that being a farmer ought to carry an automatic ban on owning a shotgun). Because it's a tourist destination with a long pedigree, though, culture sits side by side with poverty, and secondhand bookshops and private libraries plausibly rest alongside holiday parks - and it's these last which provide the setting for The Hanging Wood, when a young woman with a history of alcohol problems contacts Hannah Scarlett's cold case team to demand that her brother's disappearance should be re-investigated. Hannah finds herself once again comparing notes with historian Daniel Kind, who is researching his next book in the desultory way possible to a successful populariser of history, a pursuit which apparently leaves him plenty of time to indulge his curiosity about unexplained deaths. He's interested in Hannah, too,  but they are both feeling a bit battered, and Hannah's ex-partner the bookseller doesn't consider himself out of the picture. Although Marc isn't as central a character as in the previous books, there's still plenty to please the bibliophile (those who read Martin's blog will know his predilections) and there's a nice comment about to-be-read piles guaranteed to make readers smile, rather making up for his incendiary plot device earlier in the series.

Not surprisingly, given the author's interest in classic and forgotten crime novels, this series is establishing a firm place amongst the best of British crime fiction, nicely but not tortuously plotted, with well-drawn characters and an excellent cast of regulars. Like the golden age classics they appeal to a wide readership, and I think they will wear well.

This book was reviewed for the R.I.P. VI Challenge.
Posted by Jodie Robson at 16:41