Another weekend already and yet again, I'm reluctantly preparing for another part week in London. At least there's a small treat to look forward to: on Thursday morning - a slightly strange time to be going to a reading -  I'm going to hear Canadian novelist Jane Urquhart talk about her latest book, Sanctuary Line. I read The Underpainter some years ago and enjoyed it, but I haven't read the new one yet (there's a review by KevinfromCanada here, though, in case you are interested). It may not be quite the high point that my visit to the Dulwich Picture Gallery to see the magnificent Painting Canada (now sadly over) was, but I'm looking forward to it nonetheless.

After the Canadian exhibition I castigated myself roundly for not having bought the catalogue of what was evidently one of the best-attended Dulwich exhibitions ever, but I managed to find a copy. If you missed it, and are curious about the Group of Seven, there's some nice stuff at Dulwich on View. 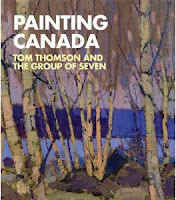 I was lucky to go to the exhibition before Christmas when it was reasonably quiet, so that I could spend as long as I wanted to in front the pictures - the final room was devoted to the work of Lawren Harris and was sublime. Harris was the most spiritual member of the Group of Seven and, while his abstract land and seascapes aren't to everyone's taste, I fell in love with his work the first time I went to the National Gallery in Canada. Then, I found it sad that I had reached my forties without having discovered this remarkable group of artists, so I was delighted that they were to be exhibited in the UK and even more so when I discovered how sensitively it had been done.

From the catalogue I discovered that an early influence on the Group was an exhibition of Scandinavian art in 1912. I like some of this work almost as much as I like Harris:

Funny, I'm not that found of snow in reality, but I love pictures of it.

I've decided to allow myself a very small number of re-reads for the Century of Books, if they are writers I really want to talk about but have read all of their work. The first is likely to be The Rosemary Tree by Elizabeth Goudge, which I felt a tremendous need to read again last week. It's not quite true that I've read everything she wrote, there are some short story collections, but I've read all her adult novels and feel that they're ingrained. I'm now so contently mired in the twentieth century that I feel no desire to work my way down the pile (fortunately fairly small) of review books which reproach me when I look in their direction. Ho hum.
Posted by Jodie Robson at 15:20