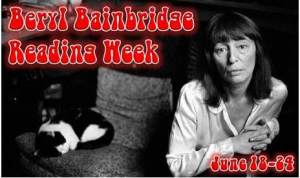 I'm really grateful to Annabel for encouraging me to read this book for her Beryl Bainbridge reading week. I'd been thinking I might read it sometime, but this persuaded me to bring it to the top of the pile. I'd chosen it because my mother mentioned it recently - we'd been talking about her own experiences as an ASM in the fifties, her initial interview not being so very different from Stella's. Since the events are based on Bainbridge's early career in the theatre, the detail throughout is perfect, right down to the sheer seediness of repertory theatre of the time.

Sixteen-year-old Stella is one of those people not really cut out for dealing with reality - she's too  much of an oddity, precocious (she's spent years chatting to the the lodgers but you have a strong feeling that she has probably never been comfortable with her contemporaries) but with no ambitions educationally, at once grown-up for her years and alarmingly naive. Her Uncle Vernon, foreseeing that there are very few options but a lifetime as a shopgirl, decides that the theatre is the answer, and arranges an interview for her at the local rep. By the time she arrives for the interview the reader is quite clear that, left to her own devices, she would never have got there:


She jumped out of the taxi and was through the door in an instant. If she had given herself time to think, paused to thank the driver or comb her hair, she might have run off in the opposite direction and wasted her moment for ever.

The trouble is, no one understands Stella: Uncle Vernon says that she's just like her mother, Renée, who abandoned her when she was a baby. She doesn't fit in with her peers or her family, she lives in her imagination and she often fails to realise what is going on around her. There's a wonderful moment when she describes one of the company in a most unfortunate way, because she has completely misunderstood the meaning of the word she's used - my mother has a story about a similar faux pas made when she was being introduced to someone's girlfriend at a party, and I can't help thinking she must have been rather like Stella, especially since I was the outcome of her convent-educated ignorance about certain matters. And if, sixteen years on, it had still been possible to go straight into rep from school, no doubt I'd have been another Stella. She seems intensely real to me as a character, masking her insecurities with stubbornness and courting experience with such determination that disaster is bound to ensue. I read a review somewhere which described Stella simply as a ghastly teenager, but I think that's unfair - she's a teenager thrust into an adult world, expected to behave as part of it but ill-equipped to do so. And if the theatre seems in some ways like the perfect environment to and for an intelligent young person, in other ways it is utterly unsuitable, full of frail egos who will offer no quarter when something goes wrong. Bainbridge shows that world in all its guises: the cosiness of the actresses knitting in their dressing rooms, the discomfort of digs, the predatoriness and spite, late nights, bad food, rehearsals which never end, it's all there in a story so satisfying I don't want to leave it, despite the tragedy we know from the beginning will await us at the end.

I'd class An Awfully Big Adventure along with Muriel Spark's The Prime of Miss Jean Brodie as an apparently modest novel that quite simply gets better and better the more I think about it. Wonderful. I'll be reading more Bainbridge, that's for certain.