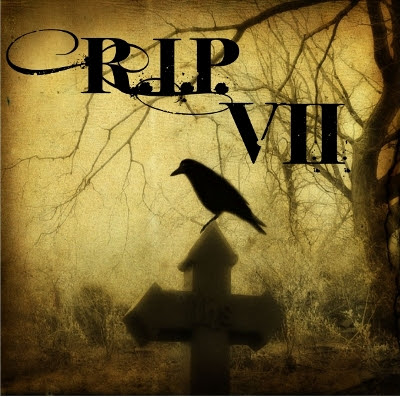 If anything were to console me for the rapid decline of this non-summer into damp autumn, it's the prospect of RIP VII. Every year, Carl's readership eagerly awaits the post that kicks it off - many of us have been planning avidly through the final days of August, hoarding books until it begins. So, although the days dawn damp and dreich, and there was almost a nip of frost in the air last night, I don't care! Let it be autumn (or fall, if you prefer) -- I'm going to welcome it!

Yesterday was an auspicious day for perilous books, too, because it was the publication day for Boneland, Alan Garner's conclusion to the series that began with the Weirdstone of Brisingamen, which celebrated its fiftieth-birthday in 2010. It, and the book which followed, The Moon of Gomrath, have long been amongst my favourites; the 50th-anniversary edition of Weirdstone opens with comments by some of the best-known present-day writers of fantasy, including Philip Pullman, Neil Gaiman, Susan Cooper and Garth Nix -- with authors like that singing his praises and acknowledging their debt to him, you'd know that Garner must be something special, even if you haven't heard of him.

So, I'm starting RIP this year by reading straight through the three books. I spent last night breathlessly accompanying Colin and Susan through the ancient copper mines beneath Alderley Edge - and it was every bit as intensely claustrophobic and terrifying as I remembered it! Then I plan to move slightly further south to the Welsh borderlands and the second of Phil Rickman's series about exorcist Merrily Watkins, Midwinter of the Spirit. That will fulfil the requirements for Peril the First, but I hope to continue reading for RIP after that, because it fits well with much of what I have planned for my Century of Books, where I have found myself rather focusing on crime and mystery -- largely because I enjoy them so much, but it's interesting to see, in an entirely ad hoc way, how the genre develops over the course of the twentieth century. I'm also hoping to join in the group read again, which this time is Neil Gaiman's The Graveyard Book (you know I can't resist a Gaiman read!)

One of the pleasures of RIP is the wonderful artwork that goes with it, this year by Gothicrow.  If you enjoy gothic images it's well worth following the link for a browse. Meanwhile, I have to see what my fellow Readers are planning, at great risk to personal safety (well, my bank balance's, at any rate)!