Despite all my efforts to be sensible I've found another challenge I simply can't resist. Cath talked about it in November, and others have been signing up since. When Margaret at BooksPlease posted her plans for reading,I knew I was going to have to give in and sign up for Peggy Ann's Read Scotland challenge -- well, I can see it (Scotland, that is) when I look over the garden wall, and I grew up there, as did my sons... (in case anyone is interested, me nearly dead centre, sons in the southwest corner): 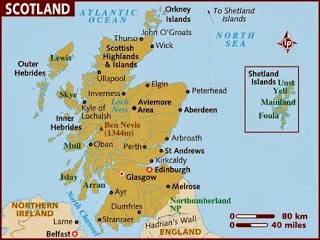 The challenge is just to read Scottish books, either by Scottish authors or set in Scotland. I've decided that I'm going to read books by Scottish women -- though I might sneakily decide that books about Scottish women count too! So far my possible reading list includes books by:

and maybe Dorothy Dunnett  and Margaret Oliphant -- a mix of the old and the new, and Highlands and Lowlands. I suspect a bit of M.C Beaton's Hamish Macbeth series might creep in there, as well and, if books about Scottish women count too, then Alexander McCall Smith's Isobel Dalhousie novels may get a look in; I've got at least one, if not two, to read, and I do love them.

I may also count Lillian Beckwith and Rowena Farre as a honorary Scots for the challenge, as I'd like to revisit their books, which I read and loved when I was growing up. Both wrote about Scottish childhoods, and on that subject, I'd like to re-read some of the memoirs of Elizabeth Grant, the eponymous "Highland Lady", books I'd recommend to anyone interested in the social history of Scotland. Particularly the first volume, which deals with her childhood, and is superb alongside A Childhood in Scotland by Christian Miller.

I shall going for the Highlander category, 5-8 books, since I grew up there. I'll be fascinated to read everyone else's reactions to the Challenge, and share some new perspectives on the country I love.