While looking for images of medieval greyhounds (as you tend to do, when you're a sighthound owner - it does become an obsession) I happened upon a lovely illustration which I had to follow up. It turned out to be from a book written in 1942 by illustrator Dorothy P. Lathrop, who was also responsible for illustrating much of Walter de la Mare's work - indeed, although her name hadn't rung any immediate bells, I instantly recognised her drawings from The Three Mulla-Mulgars. For those interested, there's a good blog post about Lathrop here.

The Dog in the Tapestry Garden is a darling little book - only 40 pages long - about a lonely Italian greyhound called Felippa who wants to play with the little white dog she can see in a tapestry. Sweetly, the dedication is to a dog, obviously the model for Felippa. The story could have been written by Elizabeth Goudge, it's very much in her style.

I had to read it online as I couldn't afford a secondhand copy (surely some publisher would love to reprint this, even if it's not in colour?). You can find it, and read for free, at https://archive.org/ - all you need to do is register for an account and you can borrow it for two weeks. The de la Mare book is there too - if you don't know it, it's also rather enchanting.

There was quite a fashion in the first half of the 20th century for such books, especially those illustrated by woodcuts or lithographs. It was such a fertile period, with illustrators like Eric Ravilious and Gwen Raverat contributing to a distinctively modern revival in wood engraving which, I suppose, was ideally suited to shorter works (for instance, Canadian engraver Cecil Buller's Song of Solomon), where text and illustration are of equal weight. It's nice that now illustrator/writers like Jackie Morris are picking up the threads and producing exquisite small works with the kind of pictures that you can lose yourself in for hours. These modern versions are as often illustrated with paintings these days (full-colour printing not being quite as prohibitively expensive as it once was) but I've seen some beautiful examples using print techniques. There was also - is still? - the lovely, regular example of Clifford Harper's woodcut-style drawings in the Guardian's Country Diary. My mother used to snip them out and send them to me (the online version of CD seems to have gone over to photographs - sad, in my view). 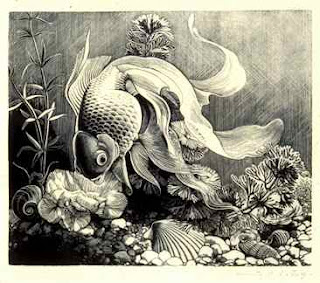 I've always meant, on this blog, to look at illustrated books on the same basis as I do the written word - that is, simply as a reflection of what I like best. So, if it's not shooting myself in the foot to promise anything at all here (because that's worked so well in the past!), I think this may herald an occasional series on illustrated books. The Dog in the Tapestry Garden, happened on by accident, feels like a very auspicious beginning to such a venture.

There is now a link at the top of the page to Illustrators and all the posts in this series.