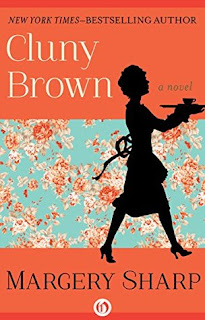 In Margery Sharp's novel of this name, twenty-year-old Cluny lives with her Uncle Arn in Paddington and assists him ably in his plumbing business by taking messages and doing the accounts. But she is of concern to her family - her uncle, his sister and his brother-in-law - because they think she doesn't "know her place": she's outgoing, adventurous, full of curiousity about the world, and this leads her to decide that she can take tea at the Ritz or be invited to parties. She's a complete innocent, and can't see any reason why these things are unacceptable - if other people can, why shouldn't she? It's decided, thanks mainly to Aunt Addie, that she must go into service as a maid in the country house of Sir Henry Carmel in Devon.

Even before she arrives Cluny's behaviour is most un-maid-ish - befriending the dog of a one of the Carmels' neighbours on the train, she is invited to go and walk it on her days off, and since the dog doesn't wish to be parted from her, she is given a lift to her new place of employment in the neighbour's Rolls-Royce. Cluny's first letter home to Uncle Arn begins: "There are twenty-seven rooms, Queeen Elizabeth slept in one of them but I have to share. The other girl is called Hilda. She had a baby last year but Mrs M. overlooked it. You tell that to Aunt Addie."

Esatblished at Friars Carmel she meets "the Professor", a writer who has fled Nazi Germany. Invited by their son for a stay of indefinite length, Belinski is warmly welcomed into the household by Andrew's parents - Lady Carmel explains her understanding of the situation to her husband: Mr Belinski is a Professor, who has been ill and now needs peace and quiet. Andrew, wrapped up in his own  concerns, does nothing to disabuse his parents of this harmless notion, feeling that the explanation is well-suited to their kind and comfortable complacency.

Belinski recognises Cluny as a misfit like himself and understands her, perhaps, better than she understands herself. When she tells him she doesn't feel as if she belongs anywhere he replies with what she regards as a magic phrase, "For you, I imagine, the whole universe is to let." Her imagination thus fired, what she will do with this idea is one strand of this quietly funny book.

In contrast, the other strand is what will happen to Andrew. Concerned that there will be another war, he frets about his future, and while his parents hope that he will come home and settle down to run the estate, he pulls away from what he calls "Lord of the Manorishness". At the same time he is vying with his friend John for the attentions of the attractive and self-assured Betty Cream, who firmly rejects them both. Although Andrew's position of privilege makes it seem as though he has much greater autonomy than Cluny, he feels trapped by both past and present.

In 1946 Cluny Brown was transported to the US and made into a romantic comedy which loses all the subtlety and humour of this very English novel. Life at Friar's Carmel is so harmonious, peaceable and comfortable that Belinski has none of the irritations that allowed him to work successfully.  Meanwhile Cluny, despite being "only" a parlourmaid, is able to escape the eye of the housekeeper often enough to form a sedate courtship with a widowed pharmacist in the nearby village. A "rom-com" demands effervescence and caricature, but what makes this book work are the tenderly-drawn characters with their little faults, foibles and escapisms. No great histrionics here, but gentle satire.
Posted by GeraniumCat at 17:42