Short Story Monday: The Gospel According to Mark by Jorge Luis Borges 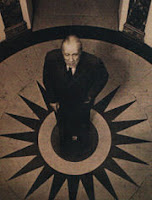 This story exemplifies the problem I have with almost all short stories, in that I tend to find them inherently unsatisfactory, while demonstrating those qualities which intrigue others. In the introduction to this collection Borges states "I have done my best – I don't know with what success – to write straightforward stories." Further, he refutes the necessity for surprise endings, preferring instead, he says, to meet the reader's expectations. Although he denies that this makes his stories of necessity simple, the effect is nonetheless to create the effect of simplicity, as also his practice of setting his stories in the past, thus creating a sense of distance and objectivity.

This quiet little story is of a young man, lacking in application and direction, who finds himself stranded at a ranch in the owner's absence. Surrounded by floods, the young Espinosa makes at first unsuccessful attempts to communicate with the gaucho family who work the land. None of his efforts really succeed until he begins to read St Mark's Gospel to the illiterate family. This apparently catches their imagination, and they begin to hurry their meal in order for the reading to start. They also begin to pay attention to Espinosa, following him around, and even picking up crumbs that he has left on the table.

At the end of the gospel he offers to continue reading with the next, but the family requests that he repeat that one, in order that they may understand better, enquiring whether Christ had allowed himself to be killed in order to save all men. "Espinosa, who was a freethinker but who felt committed to what he had read to the Gutres, answered, "Yes, to save everyone from hell."

At which point the reader, who has carefully read the Introduction before beginning this first story in the collection, knows what is to come. And, in Borges' laconic voice and understated but elegant prose, that is exactly what does happen, though we are offered no more Espinosa's realisation of what is to come.

I've said I find short stories unsatisfactory and I do, though to be truthful I cannot express what I could possibly find lacking in this one. We are given all the information we need, the scene is set sparingly, but effectively, there is no "baroque" (Borges' word) extraneous detail. I am afraid the lack is in me, that this is a world in microcosm and that Borges, an acknowledged master of the form, has created a small gem.

So I shall persevere – I shan't set in stone an undertaking to read a story a week, but I shall do my best, and take stock in perhaps six months' time, to see if I have learnt to appreciate, if not necessarily to love this art form.