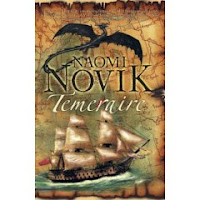 It's a good thing I picked this up during the holiday. It's been sitting on the TBR pile for months, untouched, just in case it didn't appeal after all - I can sometimes find alternate realities a bit disappointing, somehow they seem more likely to fail to engage my attention. However, I promised myself that the next read would be something for the From the Stacks challenge, and finally plumped for Temeraire (which was one of my alternative choices, but never mind). I read it at a sitting, straight through, no pauses. And thoroughly enjoyed it.

The period detail (Napoleonic Wars) is fun – where there might have been errors it was easy to ignore them. It's an alternative reality, after all. Perhaps a legitimate quibble would be that, using dragons in warfare would almost certainly have made the course of history diverge quite widely from our own, so the French Revolution wouldn't have happened, or not in that way, but really, who cares? This is an entertaining novel, and I'm a sucker for dragons. Temeraire's blend of innocence and wisdom is appealing, and his relationship with his aviator Laurence develops and deepens as the book progresses. Although it is the first in a series it doesn't, as I feared at one point, leave the reader with everything up in the air: the plot resolves while leaving a clear direction for the sequel. I liked the Appendices on dragons, a nice touch.

Perhaps the fact that it is a first novel shows a little too clearly – there are some rushed moments, and the whole book moves at a pretty brisk pace. I would like to see a little more depth in characterisation and greater leisure in description and scene-setting. These are things, however, which often come with experience and will, I hope, be more in evidence in her subsequent work. The next two are on order, and they won't be sitting on the shelf for long, that's for sure.

Email ThisBlogThis!Share to TwitterShare to FacebookShare to Pinterest
Labels: From the Stacks, review