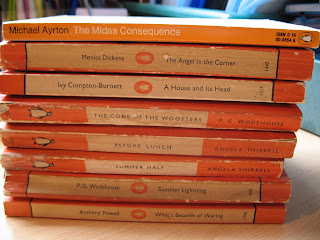 There are few things I like more than a bookshop that sells old Penguins, and in Totnes recently I was delighted to an excellent selection. I came away with the eight books below, though I could have bought more if I hadn't been restricting myself to books I really "needed" (my mother-in-law didn't believe you could need a book, an attitude which did little to build bridges between us!)

I realised a while ago that I didn't possess a single book by P.G. Wodehouse – when I wanted to read one I always got it out of the library. Since these institutions are now "information centres" or some such, and no longer believe in the necessity of books (like my mother-in-law), I can't rely on them any more even for the classics. So I was pleased to find both The Code of the Woosters, containing the saga of the Fink-Nottle/Bassett nuptials and the affair of the cow-creamer, and Summer Lightning, in which Lord Emsworth's prize pig is stolen. To re-read these books is to rediscover a wealth of old friends.

Ivy Compton-Burnett's A House and Its Head is another old acquaintance; in fact I had to leave another of her books because I couldn't remember if I already had it. It's a long time since I read it, so I can't remember what happens, though I do recall the opening chapter, with its family wrangles over the breakfast table, a typical Compton-Burnett scene.

The Angel in the Corner by Monica Dickens was not a book I remembered reading, though I thought I recognised the story of a young woman who makes a disastrous marriage to escape her domineering mother. Lacking the humour of her more autobiographical work, it makes an interesting, if earnest, contribution to my collection of books about the changes in the role of women since Victorian times.

What's Become of Waring by Anthony Powell is new to me, and promises some insight into that fascinating topic, the literary biography. According to the blurb, the death of travel writer T.T. Waring leads to a search for someone to chronicle his life. From what I know of Powell I imagine that, when it was published in 1932, the parade of putative biographers looked eminently recognisable to the literary establishment, and added bite to its wit. I shan't know who the characters represent, but will enjoy it anyway.

Angela Thirkell's Barsetshire novels are a recently-discovered delight. I can't tell you how much I love her books, and how I treasure every word. They share Wodehouse's gentle farce with Barbara Pym's excellent women, and I know that in due course every single one I can get hold of will be added to my book shelves, regardless of expense (there are quite a few). In Before Lunch (splendid title!) Thirkell creates an infuriating character to rival some of Miss Austen's, though Mr Middleton is admittedly more endearing than some of hers, and entirely lacks the malice of a Mrs Norris. Nonetheless, you find yourself wondering how his wife can bear him with such patience, and admiring her fortitude, particularly when the friend with whom she can exchange the occasional ruefully-raised eyebrow becomes romantically entangled. Summer Half, the second of her books that I bought, is still to be savoured, when I can bring myself to start it – anticipation is part of the pleasure.

Finally, another unknown, The Midas Consequence by Michael Ayrton, a writer perhaps better-known now for his painting and sculpture than for his books, though I fear most people will ask "who?" Some 20 years ago there was an exhibition of his work at the City Art Centre in Edinburgh; I went with my husband, and we fell so in love with one work that we seriously wondered whether we could sell the car to be able to buy it. Sanity prevailed, but I rather wish we had done so. I shall write about both book and artist later, I think, but in the meantime people might like to follow this link to a quite magnificent portrait of Wyndham Lewis in the Tate Gallery.