A difficult decision today – whether to put up this post or not. I wanted to share a great story with you, but at the same time I’m aware that very few of you – if any – will be able to read it for yourselves. I’ve decided to go ahead, because there is a move on the part of a number of small publishers to find the best out-of-print work and bring it to a new readership. I hope that I’m making a small contribution by writing about an author I’d like to see in print.

A Wind from Nowhere is a book of quirky and magical short stories by Nicholas Stuart Gray. I can’t tell you much about him (his short Wikipedia entry has little information, except to list several significant authors, including Gaiman, who cite him as an influence); he didn’t write very many books, and mostly what remains available is his plays rather than his novels. The Stone Cage, which I’d love to read if only I could find an affordable copy, is a re-telling of Rapunzel from the cat’s point of view, and I can tell you, Gray does good cats.

My current favourite story from the collection (which I am reading in a leisurely fashion), "Bright Silver Nothing", takes the form of a lecture to a group of students by a senior demon. His subject is sorcerors – their general untrustworthiness, their annoying human foibles, their occasional slipperiness when it comes to striking deals:

Get this into your silly heads: sorcerors are not always easy game. You must handle them with care, and not fool about. It takes practice to deal with the creatures_and you’re an ignorant bunch. Even clever demons can come unstuck, if they rush in without thinking seriously.

The demon, whose preferred name is Trilloby (though he has answered to Astaroth, Belial, and so on) relates the story of how he was summoned by the sorceror Sillifant to help a prince to marry the lady of his dreams. Not surprisingly, since dark magic is involved, things don’t go entirely to plan and some of Trilloby’s actions are a surprise ti him.

The demon Trilloby reminds me a lot of Jonathan Stroud’s Bartimaeus – this collection was published in 1978, so it’s possible that the young Stroud might have come across it and been inspired. Certainly the ways in which Gray, in all his stories, uses humour and different viewpoints to subvert the traditional format of the fairy story, are very much of a recent generation of writers; there are definite echoes in Garth Nix’s Mogget and the Disreputable Dog, as well as those I think I see in Stroud.

If you are fortunate enough to happen across Gray in the sort of library that hasn’t thrown out any book printed before 2007, or have the luck to find a copy in a secondhand bookshop, snap it up, it’s a small treasure. Rather nice cover, too. 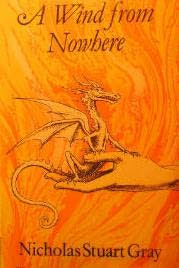 Email ThisBlogThis!Share to TwitterShare to FacebookShare to Pinterest
Labels: fairytales, fantasy, One Upon a Time III Challenge, Short Story Weekends