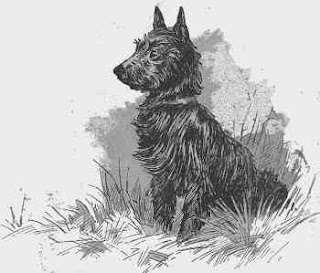 I will tell you by Times and Long Times—each time at a time. I tell good things and dretful things.

Those in the know will recognise the style of Rudyard Kipling from the Just-So Stories; some, I expect, will find is vomit-inducing. Thy Servant a Dog is a very unfashionable sort of book which, somewhat to my surprise, I greatly enjoyed. The story is told by Boots, a young Scottish (or Aberdeen) terrier whose master meets a young lady walking her own terrier, Slippers, in a London park: “There is ‘nother dog like me, off-lead. . . . There is walk-round-on-toes. There is Scrap. There is Proper Whacking.” The two households are quickly joined:
We are all here. Please look! I count paws. There is me, and Own God—Master. There is Slippers, and Slippers’ own God—Missus. That is all my paws. There is Adar. There is Cookey. There is James-with-Kennel-that-Moves. There is Harry-with-Spade. That is all Slippers’ paws. 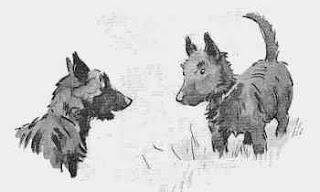 There is also their arch-enemy, the Kitchen Cat, with whom insults are frequently exchanged, and the Tall Dog discovered singing sorrowfully in the woods who becomes a regular partner in crime. When Boots and Slippers restore the lost dog to his family he tells them he is called Dam Puppy, but they discover later that he is really called Ravager, son of Regan, and comes of a line of notable fox hounds. Later, too, there is Smallest, who becomes Slippers’ special charge.

(It seems relevant to interject at this point that I don’t particularly like foxhunting— though I wouldn’t have banned it—but growing up on an enormous collection of horse-y books, including my great favourite, Sassoon’s Memoirs of a Foxhunting Man, means that I don’t in the least mind reading enthusiastic descriptions of hunting in the past; other times, other customs, as they say.)

Ravager, after a shaky start, when the Master of Foxhounds thinks that he might be “snipey-nosed”, so lacking the strong bite necessary for the leader of the pack, becomes just that, with the place of honour on the sleeping bench in the Hunt Kennels, though never too proud to talk to his friends Boots and Slippers, even if the Hunt terriers look down on them as lapdogs. So it is Boots who finds Ravager when he hit by a car, and rescues him. When Ravager recovers he is half-blind and can no longer hunt, so he is give to Smallest (Digby) for his own. This provides the book with its real tour-de-force, the chapter entitled The Great Play Hunt. When Digby’s parents say he is too young yet to ride to hounds, the dogs hatch a plan with Tags, the wily old fox who has long been the scourge of local hens, and provide him (and the hunt servant, Moore) with a hunting lesson he’ll never forget, while the two exhausted little dogs glow with pride as they refuse a car ride home at the end of the day:


We wented all across Park with Ravager and Smallest and Taffy . . . to Own Kennels—like proper Pack.

The illustration is of the three weary dogs with their tongues hanging out, walking home.

For those of us who are entirely soppy about dogs, Kipling’s writing manages to be thoroughly in-the-moment, exactly in the way we still anthropomorphise dogs to indicate their enthusiasm, their willingness to throw themselves into any activity that amuses them (“we played Rat-sticks on the lawn”), their loyalty and even their greediness. Boots has a convincing combination of self-importance and humility, and no greater understanding of the world than you would expect of a small dog. The illustrations in this edition from 1936, are by G.L. Stampa, a Punch cartoonist, and are charming line drawings.

Yes, it’s sentimental, and set in a world where dogs and servants knew their places, but I think that Kipling’s conviction is evident and there is no falsity in the writing. I suspect it’s long out of print, but secondhand copies are still available on the Internet, either on its own or as part of a Collected Dog Stories. I found the end genuinely sad—be warned, if you embark on reading it aloud to your own Smallest, there will be tears-before-bedtime, as Boots might say.
Posted by Jodie Robson at 17:05