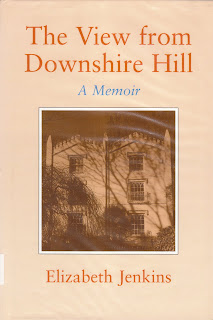 Searching our library catalogue for the next Cornflower book group read, I failed to find what I was looking for, but spotted Elizabeth Jenkins' memoir, The View from Downshire Hill. Well, I thought . . . why not have a little background about this author, who is completely new to me. It arrived this week and at bedtime last night I picked it up for a quick browse. I reluctantly stopped reading two delightful hours later. Elizabeth Jenkins is witty, but self-deprecating, with the occasional touch of asperity (as in her comments on the designer, Erno Goldfinger, whose views on London’s elegant Georgian houses she rightly disapproved of.

Here she is, early on, talking about her brief time as a pupil at the Modern School, Letchworth:

By this time it was felt at home that I was not really benefiting by the school’s advantages, so I was taken away at the end of my second term. This was not the last of my contacts with [the headmistress] Miss Cartwright, however. When my first novel was published she very kindly wrote to me, congratulating me on getting my work published and adding that she was sure I would not write for ‘self-glorification’. I replied as politely as I was able, but her letter raised a curious point: how does one write for ‘self-glorification’? If I knew, I would be at it all the time. I dare say many of us would.

Her book is not an autobiography, but a collection of reminiscences and observations about things, and people, from her life that she regards as being of interest. On leaving Newnham College Cambridge (where she once invited Edith Sitwell to be a speaker and wanted to ask her to wear all of her distinctive wardrobe) she moved to Bloomsbury, where she was taken up, and then rather painfully dropped, by the Woolfs, took tea with the Stracheys, and worked on her first novel and her biography of Lady Caroline Lamb in the Reading Room of the British Museum.

Her interest in London’s Georgian architecture is evident from the outset: during the war she worked first at 1 Montague Place, next to the British Museum, where she enjoyed exploring rooms left unused; later she worked for the famous translator of Japanese poetry, Arthur Waley at the Ministry of Information in what is now the University of London's Senate House. By this time her father had bought her a house at Downshire Hill, where she lived until old age and infirmity necessitated the move to a flat. Like Denis Severs later at 18 Folgate Street in Spitalfield, she furnished her house as well as she could afford, replacing the Edwardian furniture her father originally provided with late Georgian, as early Georgian to match the house with its elegant Gothic-arched window panes (you can just see them on the book's cover), was beyond her means.

Elizabeth Jenkins is a delightful writer, her prose elegant yet conversational and her comments on her own writing shrewd and insightful. I am very pleased to have made her acquaintance. My copy of The Tortoise and the Hare awaits my return from London.
Posted by Jodie Robson at 17:41