The Dog Who Wouldn’t Be by Farley Mowat 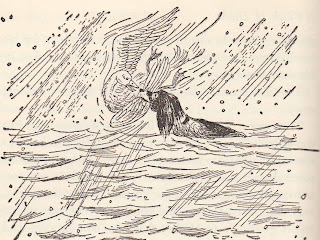 Mutt, by Paul Galdone
I was thinking that my reading for the Canadian Book Challenge wasn’t going to progress much during my lengthy absence from home – for instance, I feel it would be cheating to count any John Buchan writing not set in Canada – but I was only able to carry a limited number of books on the train, and choices had to be made. So I was pleased to rediscover a stalwart of the Canadian canon, The Dog Who Wouldn't Be, on the dining table from at least two visits ago (in my parents’ house books and newspapers adorn every possible surface, in piles); I think my mother found it in the charity shop, and she can’t resist anything with a dog in the title.

The Dog in question is Mutt, accidentally acquired by the Mowat family during a search for a hunting dog. Passed off to hunting friends as a “Prince Albert Retriever”, Mutt is initially a disaster in the field, but gradually begins to acquire his own methods, eventually becoming legendary as a dog who can retrieve even out of season. The learning process is full of incident – Mutt is enthusiastic about chasing cows – and difficulty, as Saskatoon is on the dry side for duck hunting, and Mutt’s methods eccentric: he doesn’t always wait for ducks to be shot, but retrieves a swimming bird from underneath. He’s an avid cat chaser, too, and from an early start with ladders, becomes a sure-footed mountaineer, although none of the family share his interest, and are usually to be found waiting impatiently at the foot of the precipice, anxious to continue their holiday:

This mountain climbing passion was an infernal nuisance to the rest of us, for he would sneak away whenever we stopped, and would appear high on the face of some sheer cliff, working his way steadily upward, and deaf to our commands that he return to us.

Mutt is not the only animal to share the Mowat home; the young Farley’s early interest in nature leads to an extensive collection of creatures which share his bedroom (owing to some misplaced advice by his amateur naturalist uncle that the way to learn about animals is to live with them). Two horned owls prove even more of a terror to the local cat population than Mutt.

As a British child I grew up on the writing of Gerald Durrell (there’s a feel of My Family and Other Animals to The Dog Who Wouldn’t Be – the same harassed mother and neighbours, for a start); I would have loved this book then, and would have gone on to read others by the author (and still will, I hope). I gather there is some question of the authenticity of his writing on both animal and human inhabitants of the Arctic – reading this memoir, I must admit to having doubted the total veracity of some events, but this book at least is none the worse for that. And all narrators are to some extent unreliable.
Posted by Jodie Robson at 13:43