After the Armistice Ball by Catriona McPherson 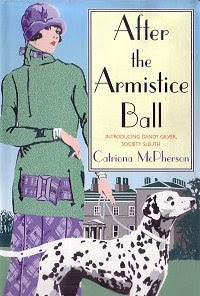 Some detective stories unfold clue by clue, so that the process of detection is, for both investigator and reader, a linear one. They can make entertaining reading, especially when accompanied by good characterisation or a heightening sense of tension, and are often the sort that end with a life or death situation: a hunt for a missing person, perhaps. Then there are the more old-fashioned kind, the successors to the Golden Age novels, where the detective has to come to grips with a really knotty puzzle – the locked room being the classic – and the sharp reader has the pleasure of being a step ahead . . . or the frustration of being a step behind. Sometimes the plot hinges on a crucial fact, as in Dorothy Sayers' Have His Carcass, that the ordinary reader will probably be unable to guess, even though the clues are there for anyone with the necessary knowledge – irritatingly so, in some cases, such as the novel I recently read which depended on an obscure point of law.

I’m delighted to say that After the Armistice Ball falls mainly into the puzzle category. It was recommended by Juxtabook, who made Catriona (pronounced Katreena, by the way) McPherson’s first book in the Dandy Gilver series sound eminently readable and fun. It’s set in Perthshire not long after World War I, where Dandy is the bored wife of a country landowner; with two young sons at prep school she has little to do beyond dealing with her correspondence and walking her purely ornamental (i.e., not a gundog, to her husband’s chagrin) Dalmatian. An intrigue over some stolen diamonds, evidently purloined during a houseparty given by her friend Daisy Esslemont, offers a much-needed diversion, but things become much more serious when a pretty young acquaintance meets a shocking death in a seaside cottage. Summoned to the scene by the young woman’s family, Dandy* senses that there is something amiss, and determines to investigate, aided, and sometimes distracted, by the victim’s fiancé.

Attention to period detail is loving – the author has obviously steeped herself in the literature of the 1920s, and knows her way round a country house, both upstairs and downstairs (more evidence of this can be seen on the Dandy Gilver website). The research is handled lightly, though – we’ve all met those books where every last detail is crammed in, in the hope that somehow the right atmosphere will be created – and Dandy’s light, inconsequential voice (she finds life more comfortable, she informs us, if she remains firmly on the surface) rattles on about the divide between the classes, the losses incurred in the war, human and financial, or the sheer boredom of country life. Her staunch avoidance of sentimentality – of overt displays of maternal affection, for instance – serve as a reminder that here are different times, different customs, while her chatty style ensures that modern sensibility isn’t offended.

I think I detect all sorts of favourite people from other books who have provided inspiration for her characters: Lady Montdore from Love in a Cold Climate, for instance, or Robert, husband of the Provincial Lady, who I’m sure lurks behind Dandy’s husband Hugh, while the Galloway setting for the seaside cottage calls Five Red Herrings very much to mind. The knowledge that this is a series, and that several more books already exist to be enjoyed, fills me with a sense of pleased anticipation, if also with concern for my personal finances, since I think these are going to stand the re-reading test. I’ve already thought of several friends and relatives who might like After the Armistice Ball for Christmas, too. My only complaint, in fact, is that I couldn’t put it down, and thus, it went far too fast.