Sadly, I have had to abandon my copy of Buchan’s Supernatural Tales in Devon, too bulky to carry home after three weeks’ absence, during which I didn’t find time to blog about it. My memory isn’t good enough to write in detail about individual stories, but I can give a flavour of it here. 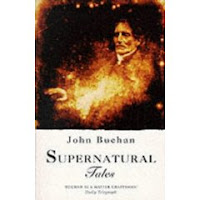 I found myself labelling it “sub-Lovecraft”; in fact, if you had asked me, I would have guessed that the title of the first story in the collection, 'The Watcher by the Door', actually referred to a Lovecraft story. On checking, though, Buchan’s story is – as I had at first supposed – earlier than anything by Lovecraft, who was only 11 when Buchan’s collection was published. The story deals with the apparent possession of Robert Ladlaw, a landowner in the coal-mining area of southern Scotland, a land which was once, according to the narrator, the ancient Pictish kingdom of Manann. Ladlaw has become convinced that he has an alter ego, an ever-present watcher by his side, an alter ego which dogs his footsteps. His nerves are badly affected, and when he finds an account of a similar occurrence in the life of the Emperor Justinian, he is certain that “some devilish occult force, lingering through the ages, had come to life after a long sleep…a deadly legacy from Pict and Roman”. His visiting friend, the narrator of the story, is gradually persuaded of the reality of this possession, since Ladlaw seems to have acquired knowledge of the area’s past that he can only have come by through some sort of direct experience. Verisimilitude is lent here, as in others of Buchan’s stories, by reference to classical authors such as Ausonius. Eventually the local vicar proves susceptible to the elemental/demon, and it moves on.

Another story, 'The Kings of Orion', focuses on a classical legend that tells how the kings of Orion were expelled from their home and came to earth, where their lineage can occasionally be seen in people with exceptional qualities. In a story with a similar theme, 'Tendebant Manus', an insignificant politician suddenly and remarkably becomes an able statesman on the death of his brother.

These last two show that a theme Buchan returns to in his supernatural stories is that of the psychology of the individual, a theme also prominent in novels such as Sickheart River. Indeed, some of his regular characters appear in the stories, a device which helps to anchor his speculation about the supernatural nature of some phenomena more firmly in the real world. Other stories hark back to classical sources, as often feature the sacred grove of legend, suggesting that Buchan probably read J.G. Frazer’s The Golden Bough.

If you are looking for the frights evoked by Lovecraft, or the great British exponent of the ghost story, M.R. James, then you may be disappointed by Buchan, although you will find some similar explorations of the tensions between the rational and the subconscious that interested the intelligentsia of the day. For Halloween reading, the novel Witchwood is the better choice. Buchan is a good storyteller (though some of his prejudices may rankle with the modern reader) and for anyone interested in the development of fantasy literature, both stories and novel make an interesting foray into the mind of the late Victorian rationalist intent on explaining the inexplicable.

A collection of Buchan's supernatural tales published as The Moon Endureth can be read on Project Gutenberg.
Posted by Jodie Robson at 01:00