Reading Harry Potter on the train

An article in the LA Times a couple of days ago considered the increasing interest in YA literature:


Many of today's young adult authors were born and raised in the 1960s and 1970s, when YA began to move beyond the staid, emotionless tales of Nancy Drew and the Hardy Boys in favor of more adventurous work from Judy Blume, Madeleine L'Engle and Robert Cormier. Now, they're turning out their own modern masterpieces.

That struck a chord with me, but it does something of a disservice to many authors of what would then be termed "children's books" who were anything but staid and emotionless. What about Alison Uttley's A Traveller in Time (1939), Elizabeth Goudge's The Little White Horse (1946), E.B. White's Charlotte's Web (1952) - I wept buckets at the end, even when I was reading it to my little brother - Rosemary Sutcliff's Eagle of the Ninth ... I could go on for ages. Of my own list of 101 unmissable children's books published before 1975, most date from before 1960. And I only picked one book by each author.

I don't mean to imply that there isn't some tremendous YA literature out there: I think it's a wonderfully fertile area in writing, and I'm delighted if people are beginning to take it as seriously as it deserves. But many of the adults who are enjoying Garth Nix or J.K. Rowling might also enjoy Edward Eager or Geoffrey Trease.

There's more to come on Geranium Cat's Bookshelf on the subject of vintage books - watch this space! 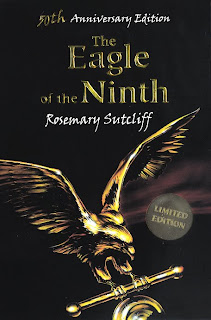 Email ThisBlogThis!Share to TwitterShare to FacebookShare to Pinterest
Labels: children's books, YA