This post is particularly addressed to my fellow readers on the Storm Front group read, which was part of the RIP VI Challenge, but I've avoided spoilers, so it's safe for everyone! 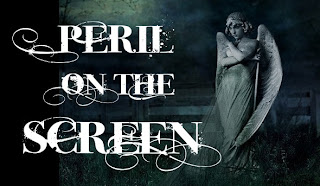 Well, it's a little late but I finally got round to watching Episode 1 of The Dresden Files. I wanted to be able to compare it to Storm Front while that was still fresh in my mind, so that I could make an informed judgment about whether it's a worthy adaptation of a fun book.

Hmm...well, it wasn't quite what I was expecting. Episode 1 is a story about a small boy who thinks he is being haunted by demons, and he asks for Harry's help because he's seen his ad in the phone book (we remember the ad, don't we?) - Harry's reluctant because he thinks the kid probably has too much imagination and he won't take money from a child. Meanwhile, Detective Murphy (who has long dark hair - what's with that?) has a flayed corpse on her hands and needs Harry's thoughts on who might be responsible, though she seems reluctant to act on his opinion when she gets it. 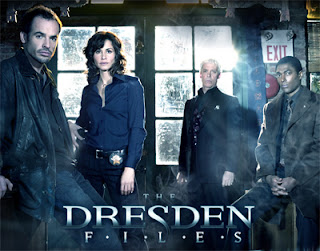 Left to right, Harry Dresden, Det. Murphy, Bob and someone we haven't met yet...
To set the scene in this opening episode, we get a bit of the back story about Harry and his dad the magician, and a hint that Harry's powers come via his mother. Bob the skull puts in an appearance - rather more of one than you'd expect, given that he's corporeal. He's also very concerned about the wellbeing of the small boy and makes it clear that he thinks Harry's made a mistake there - all very commendable, but where's the wisecracking lecher we all liked so much? (Looking at the picture above, I'm beginning to wonder if Bob is going to turn out to be a fallen angel...)

A similarity to the books was that the story was launched into without too much preamble, and there weren't many explanations about the rules of magic, or the White Council. In fact, there was only one mention of the Council that I can remember, and I missed the explanations, because they were fun to read. Although Harry narrates, the Chandleresque noir atmosphere was almost entirely absent, and Harry seems to have gained a nice, girl-next-door sort of girlfriend. No chemistry discernible between him and Murphy.

When we were discussing the book Castle was several times mentioned as being like The Dresden Files. A bit of the sharpness and sassiness that went into Castle would have been very welcome here (so would Nathan Fillion, and not only because...well, we won't go into that). But I think we were all agreed that TDF ought to be Castle with magic, and unfortunately, Castle's magic was missing. So was Mister the Cat.

This first part seemed very short - an American TV hour doesn't offer a lot of time to pack in an elaborate plot, but there's plenty of evidence that it can be done (especially by Joss Whedon and his team). Maybe this will get better - I'd love it if it did, but I'm not holding out much hope. The best I can say is that it's amiable. I'll keep watching it, and OH quite enjoyed it, but he hadn't read Storm Front, of course.
Posted by Jodie Robson at 18:08