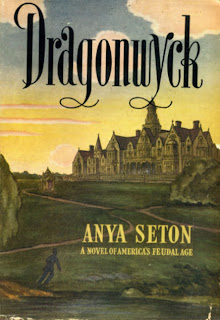 When I found a copy of Dragonwyck in a bookshop the other day I couldn't resist re-reading to see what I thought of something last seen in my early teens, when it was one of those must-reads passed around at school. It's funny, but in the late '60s there was no sense that this book, first published in 1945, was in any sense dated, but the rate of change was slower in those days, certainly in a small town in the Scottish Highlands, where my scarlet tights were looked at askance when I walked down the High Street, even though they were much more seemly than the gap of cold blue flesh that showed above other people's stocking tops (my father, used to dancers from his theatrical days, couldn't understand why tights took so long to catch on there!) But there was nothing especially provincial about our reading matter and schoolgirls at the time existed on a diet of Victoria Holt, Jean Plaidy, Margaret Irwin, Mary Stewart, Anya Seton -- all to be found in both school and local libraries. We may not have known who were the parties in the Treaty of Versailles, but we could produce a lengthy list of kings' mistresses and we knew that Lucrezia Borgia was more likely to be a political pawn than a hardened poisoner.

Seton wrote a number of well-regarded historical novels, such as Katherine and My Theodosia, focusing on real people and events, as well as romantic novels with a historical setting, such as The Turquoise and Dragonwyck which owe a good deal to the full-blown gothic novel, but aren't as dark. Actually, Dragonwyck was rather less dark than I had remembered it (it turned out to be a poor candidate for an RIP read, with very little chance that it would raise as much as a shiver), despite the back-cover blurb which begins:


Dragonwyck is waiting for you, as eerie and splendid as when Miranda came up from the country in 1843, expecting fairytale happiness.

Growing up on the family farm, seventeen-year-old Miranda dreams of romance and the distant glories of New York, but she can't see any prospect of leaving home. Her parents expect her to marry a local farmer and settle down to having a family, just like her younger sister is about to do. But when a letter arrives from her mother's cousin, Nicholas van Ryn, inviting one of the girls for a visit, Miranda is determined to go. And her first impression of Dragonwyck lives up to her hopes:


She stared at the fantastic silhouette which loomed dark against the eastern sky, the spires and  and gables and chimneys dominated in the centre by one high tower; and it was as though the good and the evil, the happiness and tragedy, which she was to experience under that roof materialized into physical force and struck across the quiet river into her soul.

So you see, we know from the very start that things aren't going to go smoothly, and when she arrives at the house, Miranda finds that her handsome cousin has a grossly fat wife who immediately takes against the beautiful girl. Johanna expects Miranda to act as governess to the unprepossessing Katrine, who it is obvious will grow up just like her mother. Nicholas, meanwhile, pays erratic attention to Miranda, including her in social occasions but ignoring her much of the time. Nonetheless, she becomes aware of a growing attraction to him.

The story happens against a background of real-life events. Update New York at this period had a complicated system of land ownership dating back to the Dutch control of the area, and which was leading to growing resentment amongst tenant farmers. Like the Rebecca Riots in Wales, disaffected farmers dressed up, in this case as "Indians", in order to disguise themselves while they attacked the Dutch patroons. The landowning families around the van Ryns are real ones: the van Rensselaers, the Astors, and so on, and literary figures appear as well. One of the more truly gothic moments is a visit to the bedside of Edgar Allen Poe and his dying young wife.

So, how did Dragonwyck fare 40-something years from my first reading? Well, it's a very quick and easy read -- I'm sure that if it had been written today it would have been much longer. For a start, more would have been made of the old retainer, Zélie, and her predictions, and Katrine, and even Johanna, would have been more fully-developed characters, too. I say "written today", but I found myself wondering what Dragonwyck would have been in the hands of, say, Daphne du Maurier -- much more brooding and oppressive, with a real screwing-up of tension before the first death occurs, and then to the subsequent events. I'd remembered Seton as a more consciously gothic writer, but it's much more that she evokes a portrait of the gothic. There's a lack of the self-indulgence which tends to characterise the genre, an absence of the purely histrionic. Seton's rather benign humour keeps creeping in, so that the reader is all too aware of the nice healthy young Dr Turner, where there should be a morbid fascination with Nicholas van Ryn.

Part of the problem comes from Miranda herself. She's no Jane Eyre, nor a fainting young heroine from a sheltered background, she's a resourceful farmer's daughter, capable of killing a chicken even if she doesn't like to do it. So, even at her most isolated within the household, she is too practical to be completely overpowered by Nicholas. The other problem is the occasional foray into Nicholas's point of view, which simply doesn't work -- and shouldn't: we need no more information about him than Miranda can infer for herself. This isn't a major flaw, though, as it's abandoned quite early.

All in all, it's very suitable reading for teenage girls looking for a first "grown-up" novel -- much easier reading than the aforementioned Jane Eyre, which so many people come to too young. This time round I found the interest lay in the history on offer, which took me off to explore Wikipedia -- riverboats figure largely, too, and turned out to be quite interesting, and I spent some time retracing Miranda's route to Dragonwyck. I'm glad to have ventured on a re-read, though, and would quite happily return to some of Seton's other novels, although I doubt if I'll actively seek them out.
Posted by GeraniumCat at 17:37