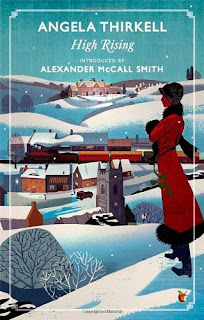 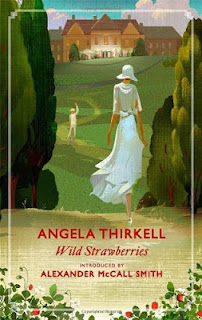 Excitement this week with the republication of the first two of Angela Thirkell's Barsetshire novels by Virago Modern Classics: High Rising and Wild Strawberries. There's a lovely review of High Rising by Claire at The Captive Reader, so I won't talk about that here, except to say that the cover is lovely, amd to warn you that Claire does talk about the whole book, so if you want to avoid spoilers, save it until later. I shall try not to give too much away about Wild Strawberries here.

You could argue, of course, that since nothing very much happens in AT's books, spoilers don't really matter too much, and most people who enjoy them re-read them endlessly - there are groups on both Yahoo and FaceBook who are working their way through in chronological order and, once the end is reached, we all go back to the beginning again. At a book a month it takes 2 and a half years to get through them and I find that's too infrequently to revisit some of my favourites. And the moment I start talking to other enthusiasts I realise how woefully inadequate my knowledge of the books is, so I have to rush back to whichever was under discussion. There are societies both here and in the US, by the way -- just one of the advantages of being a member, in the UK at any rate, is the secondhand booklist circulated to members. Some of my treasured AT collection came from there.

On to Wild Strawberries itself. Rushwater House (whose "only outward merit is that it might have been worse than it was") is home to the Leslies, and sees lots of coming and going amongst the extended family, all lovingly and exhaustingly overseen by Lady Emily. The family is first seen arriving at church, where the long-suffering vicar is waiting to begin the service, and knowing that not only will they be late, but that chaos will ensue with their arrival. The family party consists of Lady Emily herself, her husband Mr Leslie, their surviving sons John and David, their daughter Agnes Graham with her three children, Emmy, James and Clarissa, their grandson, Martin whose father was killed in the Great War and, of course, Nannie and Ivy, in attendance on the small children. To that number will shortly be added young Mary Preston, Agnes's niece by marriage, on an extended visit while her mother goes abroad for health reasons. Unfortunately, another arrival coincides with Mary's, that of the disagreeable Mr Holt, who has invited himself to see  over the garden. Mr Leslie is furious, because Mr Holt is crashingly dull, sycophantic yet demanding, not only arriving with the minimum of notice but expecting to be driven to his next destination whether it's convenient or not. In his youth he had been much more popular, as something of an expert on horticulture, but illness has made him deaf and irritable, so that Mrs Thirkell tells us:  "It would be easy to be sorry for Mr Holt in his unhonoured old age; but he is so conceited and irritating that compassion melts to bored anger." On this occasion, Mr Holt is not to be allowed the occasion to demonstrate his knowledge -- he's thwarted at every attempt by Lady Emily, who needs to rest after lunch, and Agnes, who is much too preoccupied, in her vague and placid way, with her children.

As the summer begins the vicarage is let to a French family, with whom Martin is to take lessons. Mary, meanwhile, has been enjoying herself doing very little beyond going for long walks with David when he comes down from Town -- which he does frequently, being a charming wastrel with no occupation and no ambition. If he's aware at all that Mary is rather beginning to fall in love with him, he pays it no heed, but it provides the opportunity for a wonderfully funny lunch date in which Mary and another young woman are at daggers drawn over the self-absorbed David:


David mentioned a ballet which Mary hadn't seen. Joan had seen it in Paris. David mentioned a symphony which Joan hadn't heard. Mary had heard Toscanini conduct it, though she omitted to say it was on a gramophone. Joan mentioned a banned book. David knew a man who had bought fifty copies in France and smuggled them over on an aeroplane, but Mary was here inspired to say that she had read it in typescript and found it simply dull...

I might add here that David is one of my least favourite characters in the Barsetshire books, and I'm always delighted to see his ego dented, not that it ever is for long. If ever anyone was born with a silver spoon in his mouth it's David. Mind you, in real life Lady Emily too would drive me to fury in about five minutes flat, as she sheds scarves and possessions, disrupts everyone's plans and interrupts all conversations. But although it can almost be a relief to turn to the broader comedy offered by Nannie and the housekeeper vying for supremacy, or the infuriatingly bossy Madame Boulle, for whom everything English is inferior to what may be obtained in France (which is, as we all know, just plain ridiculous!), there is just so much to enjoy here.

Finally, VMC has issued both books for Kindle, as well as the lovely print editions. In  addition, Wild Strawberries and Pomfret Towers are available as very affordable and beautifully read audiobooks in mp3 format, from Rockethouse Publishing, and High Rising will be released later this year -- if you prefer to buy them on CD they are available from Amazon.

Later: I hadn't really finished this when it published itself, and I had another link I wanted to add. Readers of High Rising who are curious about the quotations and "relusions" they find within the text may enjoy the list of them compiled by members of the Angela Thirkell Society. There are Relusions for a further eighteen books on the website. I find them immensely useful -- I may spot references to Dickens fairly reliably (though I'm not always sure which book, or if it's misquoted) but there's one in High Rising to a character by Meredith, and I can't imagine I would ever have got round to tracking that one down!
Posted by GeraniumCat at 18:06