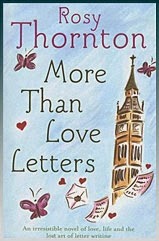 I would love it if you would write to me next time we are apart... It is partly about having the letter to go through again (like Gran always says, you can't re-read a phone call). But it isn't just that, because you can save an email and open it up again whenever you want. or even print it out and keep it. It's also the idea of having the paper that you touched, that you looked at while you thought of the words -- and then the writing itself, telling me how you were feeling by how the words are flowing along smoothly, or scrawled in a great rush, or uneven and halting.

Although this is from a love letter in today's book, it applies equally well to any handwritten letter between friends, and eloquently describes the pleasure I've taken in sending cards and letters in the Month of Letters Challenge (now sadly ended for another year), the ongoing Postal Reading Challenge and now, in Postcrossing, in which complete strangers from anywhere in the world send each other postcards.

More Than Love Letters isn't only about handwritten mail -- the story is told in letters, email, excerpts from the minutes of meetings, even the odd newspaper cutting. It begins with a letter from Margaret, a teacher in her first job, to MP for Ipswich Richard Slater, to complain about VAT charged on sanitary protection -- not a cause he feels immediately drawn to. She follows up with various complaints about lack of bins for dog mess in local parks and so on, and he mentally categorises her as a mad old bat and ignores her, concentrating instead on trying to worm his way into the good graces of the Prime Minister (Ruler of the World, as Richard calls him). All very New Labour. Meanwhile, Margaret is settling into her new home, getting to know her landlady (another letter-writer), joining a local women's collective which runs a hostel for homeless women, and staying in touch with her Gran and with her friend Becs. It's only when Margaret threatens to tell the ROTW -- by now labelled the Rotweiler in Richard's mind -- that he isn't taking his constituents' complaints seriously, that Richard suggests she attend his surgery. And when he meets her, he's smitten.

Although there are moments of high comedy in this very amiable novel, it belies its slightly chick-lit cover. I'd defy anyone not to be moved by the plight of Helen, one of the hostel residents, and there are other sadnesses too. Margaret's Gran is reaching the age when she is finding managing on her own difficult, landlady Cora misses her husband who is absent on the oil rigs -- they all tell their stories through their letters. And if Margaret's idealism and fervour might be too much unadulterated, there are plenty of voices here to vary the tone and pace of the book: for a first novel it's written with a great deal of assurance. Rosy Thornton has gone on to write more challenging books since: amongst others, Hearts and Minds turns the Cambridge academic setting she's familiar with into a thoughtful, Pym-ish human comedy, while Ninepins* focuses on a mother-daughter relationship in an oddly claustrophobic novel, given the wonderfully realised sweep of its fenland backdrop. Both are books to read again.

Although I chose More Than Love Letters as a light (re-)read and with an ulterior motive -- wanting an epistolary novel to finally kick-off my Postal Reading -- it was pleasantly rewarding, not least because Thornton is that rare author, one whose characters can make jokes that are actually funny for the reader!


* Edited later to link to my other reviews of Rosy Thornton's books, just in case people are interested:
Ninepins
Tapestry of Love