The Runaways by Elizabeth Goudge 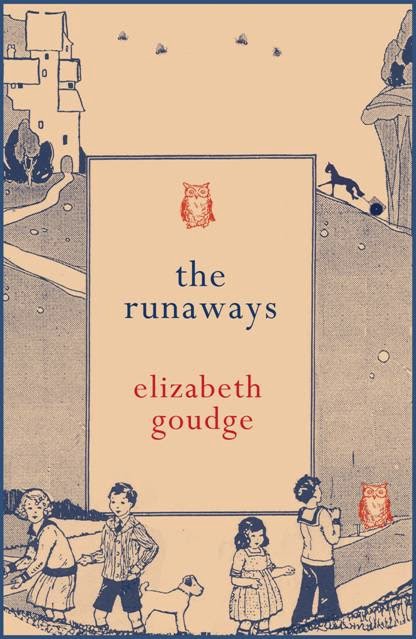 I wrote recently about the new Hesperus Press edition of Pollyanna, but what I didn’t mention at the time was that it wasn’t the only children’s classic they reissued in February. The other was one of my childhood favourites, Elizabeth Goudge’s Linnets and Valerians, which they have republished under its American title, The Runaways.

Regular readers of Geranium Cat’s Bookshelf will perhaps have inferred something of my great love for the British countryside, and my resulting enthusiasm for books which portray and celebrate it. And here we have a book which glorifies a very special place, Dartmoor. Elizabeth Goudge lived within sight of the moor for some twelve years, and her writing of Devon is redolent of the rounded, wooded hills of the county, with its glowing sunsets, lush green fields and rich red earth, and the looming tors of the moor ever-present in the background (although they are often present only in the imagination, since it rains pretty frequently).

The four Linnet children have been sent to live with their grandmother in Devon, while their father is abroad with his regiment, and they are Not Happy about it:

They had no wish to live with her, for she was a very autocratic old lady… She believed that children should be instantly obedient and she did not like dogs. She said that Absolom had fleas and must be given away, and if that was not enough, she had arranged for Robert and Nan to go to boarding school while her companion Miss Bold taught Timothy and Betsy at home. The children were in despair.

So they decide to escape.  Over the garden wall, with Absolom, of course, and off towards the sunset, and the moor – though they don’t know that’s where they’re headed because they don’t really have any idea about where they are or where they are going. After a long and tiring uphill walk, they “borrow” a horse and cart from outside an inn, and the pony very obligingly takes them straight home – his home, that is – where they are greeted by an irascible elderly gentleman who announces that there is only one thing he dislikes more than a child, and that’s a dog. Fortunately for the children, this presages their move to High Barton and their discovery of a wondrous, and sometimes frightening, new world.

It is also a world where the presence and absence of boundaries is paramount. The children’s lives are bounded by the necessity to learn – self-discipline and formal education are equally insisted upon by their new-found uncle – but in observing the boundaries they are free to roam the unbounded moor and to discover new experiences and people. This juxtaposition of discipline and freedom is a common theme in  Goudge’s books and leads to beguiling imagery of portals and labyrinths, reminiscent of Aslan’s “further up and further in”. In The Runaways, the maze/labyrinth image of the early Christian mystics links to the theme of being lost, both physically and psychically. Goudge’s Christianity verges on nature mysticism (there’s an illuminating chapter in her autobiography, The Joy of the Snow) and, as in Lewis’s work, animals often play an important, and sometimes nearly omniscient, role, although less so in The Runaways than in The Little White Horse – here, the “wise animal” role is allocated to the bees, who guide the children in moments of extremis; there is a difference, too, in that not all the animals in The Runaways are good (Monsieur Cocq du Noir’s rooster in The Little White Horse might be said to be bad, but to me it seems more neutral than actively wicked like its master).

Although Christian mysticism runs like a silver thread through all Goudge’s books, I don’t think that in The Runaways it will impinge on the enjoyment of the modern reader. It’s true that her books are very popular with Christian readers – though I was intrigued to find one reader who’d abandoned this one, considering the nature mysticism and magic a step too far – but here, the children's adventures will surely captivate the young reader. For the adult reader, it’s only necessary to believe that spirituality of some kind is a fairly fundamental part of the human condition, in order to share the hopes and fears of Goudge’s characters and to wish for a fulfilling conclusion.

And the characters in Goudge’s novels are always memorable. Her children are lovable, but rarely without faults. Robert is wilful, Timothy is inclined to nerves, Betsy is complacent – only Nan is quiet and thoughtful, and even she will have grown immeasurably as a person by the end of the story. The adults are equally striking: wise Uncle Ambrose, wonderful one-legged Ezra Oake, the sad, withdrawn Lady Alicia and her servant Moses, the oddly sinister Emma Cobley… even the animals are unforgettable – Andromache the cat and Hector the owl, Rob Roy and sad, lonely Abednego. And, at the heart of it all, the almost animate, glorious Dartmoor:

“...along the eastern horizon lay the range of blue hills called Dartmoor”
(E. Goudge, The Joy of the Snow, 1974)

She stood and looked abut her and she wondered if there was any place more lovely and strange than this, poised here halfway between the world of the trees and of the clouds. It was a miniature green valley, almost like a garden, held in a cleft of the rock. The two spurs of rock that contained it on each side were both the same shape, like the paws and forearms of a huge beast, and viewed from this side they were not menacing but protective, as though the beast held the garden in his arms. A small stream ran down the centre of it and fell over the edge of the cliff down to the trees below, and the banks of the stream were thick with water forget-me-nots and green ferns. There were flowers everywhere in the grass and more ferns and little rowan trees grew up the sides of the valley. Nan put her flowers into a pool between two stones at the edge of the stream, to get a good drink, and she had a drink herself, lifting the water in her cupped hands. Then she sat down to rest and for the first time looked up at the rock at the head of the valley and saw it shaped like the chest of the beast and up above it, against the sky, was the huge shaggy lion’s head. Now she knew where she was, between the paws of the lion who kept guard beneath the tor.

What Nan finds below Lion Tor is at the heart of this enchanting book.
Posted by GeraniumCat at 15:30